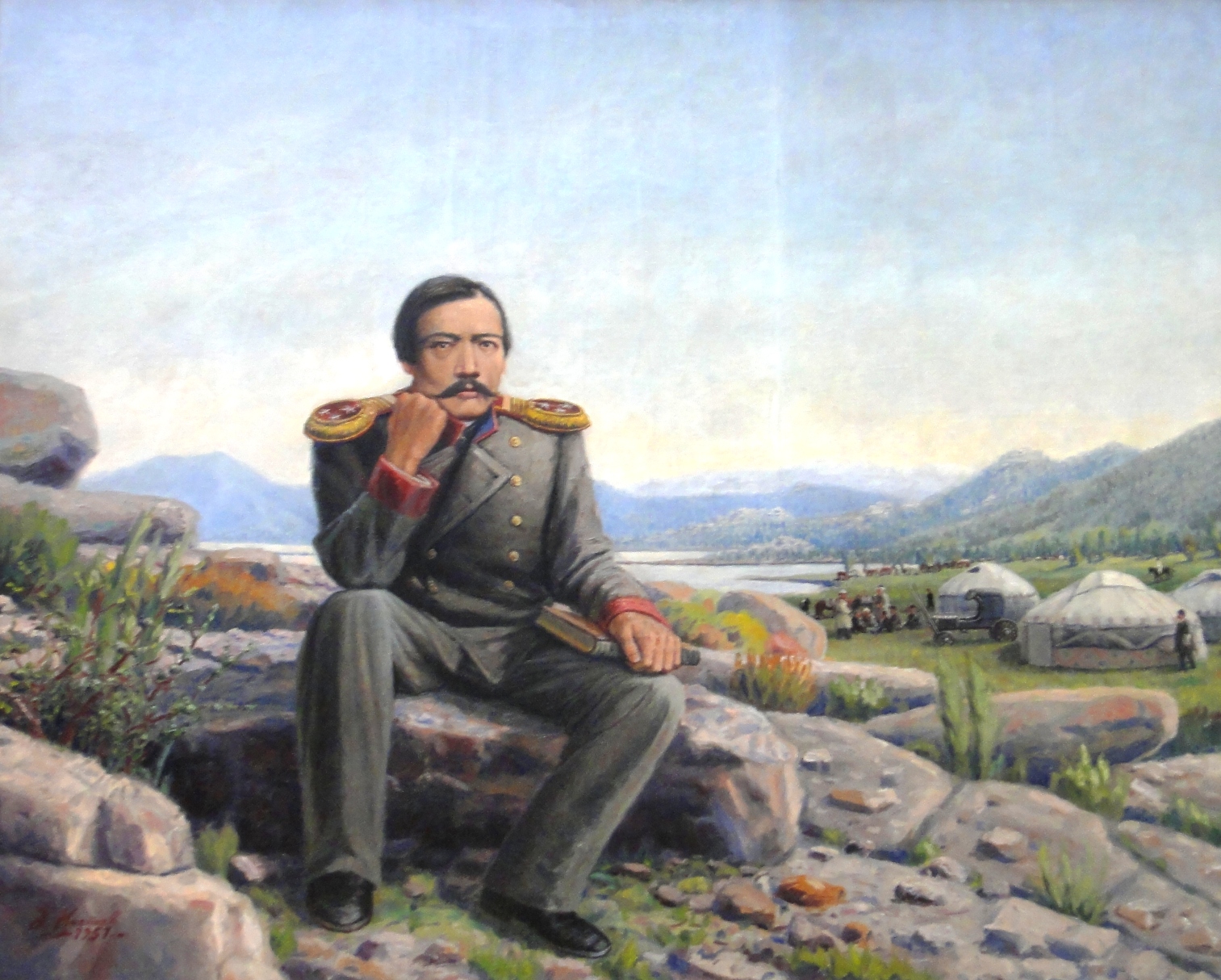 Chokan (Muhammad Hanafiya) Valihanov was born in November 1835 in the fortress Kushmurun (near Kostanay) in the family of senior Sultan of Aman Karagai district Chingis Valikhanova.

Chokan (Muhammad Hanafiya) Valihanov was born in November 1835 in the fortress Kushmurun (near Kostanay) in the family of senior Sultan of Aman Karagai district Chingis Valikhanova. His childhood for the first time he spent in Kushmurun and then in Syrymbet — homestead of his grandmother Aiganym (modern North Kazakhstan region). Chokan developed at early age and his main spiritual features were identified in childhood.

In the autumn 1847, 12 years old Chokan, left his native steppe and accompanied by his father came to study at the Omsk Cadet Corps.

Many lecturers of the Cadet admired by young Chokan’ profound knowledge and extraordinary memory mixed together with hard work and high moral character of his personality. His exceptional ability was in the study of history, geography and Oriental Philology. Writer and orientalist N. Kostyletsky and history teacher Gonsewsky made strong influence on his the development. Chokan met his friend outstanding scientist G. Potanin in the Cadet Corps. His erudition especially in the field of Oriental literature was highly regarded by S. Durov, P. Semyonov-Tyan-Shansky and N. Yadrintcev. Chokan was close relationship with Russian writer F. Dostoyevsky, who served a hard labor with S. Durov in Omsk fortress.

In 1853, at the age of 18 Chokan graduated Cadet Corps and was released as cornet «for the army cavalry».

Social and literary activities of Chokan Valikhanov began immediately after graduation. Officially he was determined as an officer of the 6th Cavalry regiment of the Siberian Cossack Army, but he was by the Governor-General of Western Siberia. A year later he appointed as adjutant of General Gasfort, who at that time was a ruler of Western Siberia and north-eastern regions of Kazakhstan.

At the same time through the General Directorate of the region Ch. Valikhanov was appointed as an officer on special assignments.

Chokan, being ready to serve his country, sought to productive and creative activity. From 1854 to1857 period of time Chocan takes an active part in resolving the issue of the peaceful accession of Kazakh Senior zhuz and Kyrgyz tribes Boke, Sarybagysh Salt to Russia. At the same time he began to go to study geography, history, customs and folk poetry of Kazakhs and Kirghiz….

In 1855, he took part in the trip of General Gasfort and traveled within the Central Kazakhstan, Semirechie and Tarbagatai. His route was from Omsk in Semipalatinsk and through Ayaguz and Kapal to Ili Alatau, where at that time there was construction of Vernyi fortification.
This trip was the impetus for Chokan’s research of Kazakh history and their culture. Chokan collected materials on statistics, customary law and the ancient religion of the Kazakhs.

From 1856 to 1857, he took part in a large military-scientific expedition organized by the leadership of Colonel M. Khomentovsky. The aim of the expedition was to familiarize with the Kyrgyz people and shooting the pool of Issyk-Kul.

«My journey can be divided into two periods. The first period concludes my way to Dzhungaria, i.e. to Semiretsk and Trans-Ili region and Issyk-Kul Lake… I visited Dzhungaria for the first time in 1856, and participated in the first expedition undertaken by Colonel Khomentovsky near the Issyk-Kul Lake. Then three months I lived in Kuldzha. Overall I was five month in Dzhungaria and managed to explore this region along and across from Ala-Kul to Tien Shan Mountains, which I climbed at the same year by the Dzhirgalan River».

During this trip Chokan collected ornithological and entomological collection, made herbarium, studied the flora and fauna of Zhetysu and Issyk-Kul. He took part in the shooting of Issyk-Kul, shape and contours of its shores as a result have changed in a new map. In this expedition, a young researcher for the first time drew attention to the famous poem of the Kyrgyz people «Manas», made its first scientific record and partly translated into Russian. For the first time he made analysis and examination of the image of its legendary hero Manas and other characters of the poem.
In the beginning of 1856, Chokan Valikhanov visited Kuldzha. Along the way, he visited a number of border points of Western China. He stayed in Kuldzha for about three months and then in late autumn returned to Omsk. Valikhanov’s trip in 1857 was the trial step before his expedition to Kashgar.

Geographical and historical studies of the young Kazakh scientist through Pyotr Semyonov-Tyan-Shan became known in scientific circles of St. Petersburg. February 27, 1857 Chokan Valihanov elected to the actual members of the Russian Geographical Society, which meant his outstanding service to the Russian science.

The heyday of scientific and educational activities of Valikhanov refers to the end of the 50’s — early 60’s of the 19th century. In 1858–1859, he made his famous trip to Kashgar, which brought him the fame of brave traveler. After exploring geography, history, political system, especially the culture and life of the then almost unknown in Europe, countries, Ch. Valikhanov made a significant contribution to the scientific study of Eastern Turkestan.

Sending an expedition in which researchers were interested geographers, while consistent with the interests of the foreign policy of the Russian government and has been linked to general political activities, which are then carried out in the Central Asian East, especially in connection with the pursuit of maximum expansion of trade with the East. Successfully completing his journey in ten months and fourteen days, on April 12, 1859 Chokan arrived in strengthening the Vernyi (Almaty), having a «rich reserve of interesting information about Kashgar»

The main result of Valikhanov’s trip to Kashgar was his major work «About Altyshara condition or six eastern cities of China’s provinces Nan-Lu (Small Bukharin)».

It was the first research on the history, geography and social structure of the peoples of Eastern Turkestan, written with the achievements of modern for Valikhanov science. Coverage of new materials, as well as the breadth and depth of their analysis of his work was a major contribution to our science. It has not lost its significance even today.
From the end of 1959 to the spring of 1961, Ch. Valikhanov was in Petersburg. His activities in St. Petersburg were very exuberant and diverse. He worked at several institutions: the Military Academic Committee of the General Staff, Asian Department and Geographical Society, also at the same time he attended lectures at the university.
Under the instruction of the Military Committee, he designed maps of Central Asia and Eastern Turkestan. In the Geographical Society, he participated in the preparations for the publication of the works of Ritter.

He collected materials on the geography and ethnography of Kazakhstan and Central Asia, also did lectures to members of the community of East Turkestan, Tien Shan and Kyrgyzstan. His lectures were very interesting. Some of them are sometimes published in newspapers in the summary.
However, Kashgar trip had negative impact on Valikhanov’s health. In the spring of 1861, a serious illness forced him to leave Petersburg. On the advice of doctors, he went to his native steppe with hope to improve his poor health.

Having desire to overcome backwardness and lawlessness in the steppe, in 1862 Valikhanov announced his candidacy for the post of an elected elder sultan of Atbasar district ministry, which led to disagreements with relatives. Soon he moved to Omsk, where he took part in the work of the legal commission of the Regional Board and worked on the Kazakh judicial reform.

In the spring of 1864 Valikhanov was invited to a military expedition of General Chernyaev, whose task was to join the Southern Kazakhstan to Russia. In July 1864 Chokan with a group of officers who were dissatisfied with the actions of Chernyaev returned in Vernyi.

Ch. Valikhanov could not recover his health. He died in April 1865 in the village Tezek in Koshentogan tract, near the foot of the Altyn-Emel range.

Outstanding Kazakh scientist and educator Chokan Valikhanov left behind a vast literary legacy. During his short life he managed to write a number of works on the history, geography and ethnography of the peoples of Central Asia and Kazakhstan, as well as a considerable amount of works on socio-political issues. Despite his youth, it was a perfectly formed, a prominent scientist with an encyclopedic mind, managed to put in a new series of questions in contemporary science.