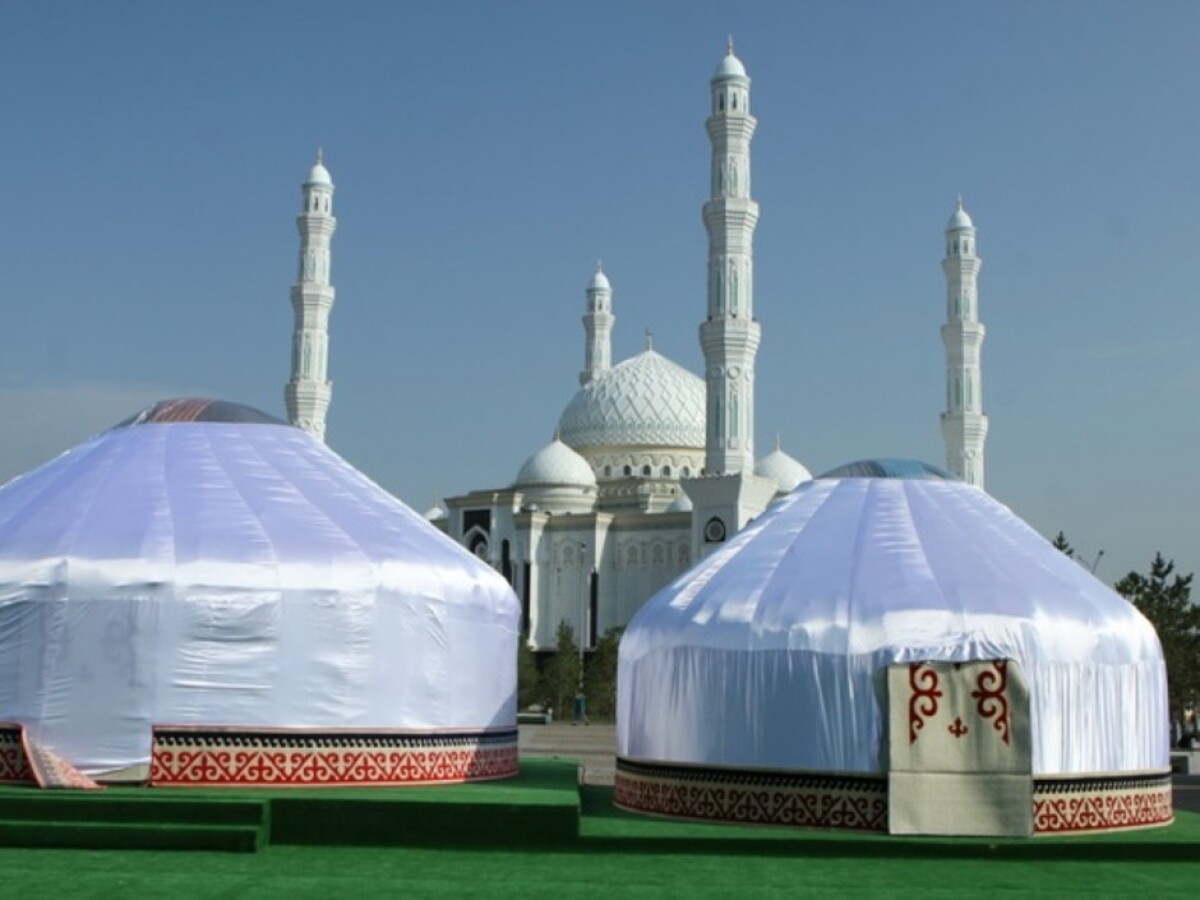 At the square “Kazakh Eli” 50 yurts, two large stelae, sports grounds, altybakans, taykazans were set, and other surprises were prepared.
In Astana the preparatory works to the 550th anniversary of the Kazakh khanate are in full swing. The main epicenter of the festive events would be the square in front of the monument “Kazakh Eli” where the theatrical performance from 11 to 13 September will be presented to the residents and guests.
At the square “Kazakh eli” 50 yurts, two large stelae, sports groubds, altybakans, taykazans were set, and other surprises were prepared. For the residents and guests of the capital the organizers prepared the varied entertainment concert program. During three days for the guests the best groups of Akmola, Aktobe, Almaty, Atyrau, Eastern Kazakhstan, West Kazakhstan, Karaganda, Kostanay, Kyzylorda, Mangystau, Pavlodar, North Kazakhstan, South Kazakhstan regions, also the cities of Astana and Almaty will perform", in the Directorate of Culture of Astana reported.
Karlygash Azhieva, the director of the festive event said, “On 11, 12, 13 September at the square “Kazakh Eli” we are going to host cordially the people from almost all the Kazakhstan. Here the delegates, art brigades, masters of dance and song, performers of the folk instruments will meet to celebrate together with all the country the 550th anniversary of the Kazakh khanate. At the square “Kazakh Eli” there are two stages on which each day the splendid events will take place in the form of dance festival, festival of the theatrical costume, concert “Gasyrlar Uni”. The Gala concert in which absolutely all guests are going to participate, will take place.
The organizers prepared the varied entertainment concert program for the spectators. During three days the best groups from various regions of the country will perform for the guests; guests also will be able to see the theatrical performance and become the spectators of the Gala Concert with the participation of the local stars.
A part of the festive events will be the exhibition of the artisans. Here it is possible to see the objects and adornments made of wood, jewelry, ceramics, musical instruments, pictures and national clothes.
Each region, besides the concert program with the participation of the best choreographic groups, ensembles, soloists of the folk and stage genres will present the video-presentation “Ancient cities of Kazakhstan”, festival of fashion “History of people through the history of the Kazakh national costume”, festival of dance “Sikyrly bi alemi”, concert of the friendship of people of Kazakhstan “Birligimiz zharaskan”, ethnoconcert “Gasyrlar uni” to the spectators. Besides, especially for children-orphans the excursion on the ethnoaul will be carried out, and the concert with the participation of the talented youth of Astana will take place.
The most gorgeous event of the three-day celebrations will become the parade-demonstration in national costumes, in which the representatives of all the regions will participate. It will be at the square near the monument “Kazakh Eli” on 12 September at 10 a. m. On the same day at 7 p. m. the Gala Concert with the participation of all regions in which the best program items are going to be presented, will take place.
Use of materials for publication, commercial use, or distribution requires written or oral permission from the Board of Editors or the author. Hyperlink to Qazaqstan tarihy portal is necessary. All rights reserved by the Law RK “On author’s rights and related rights”. To request authorization email to or call to 8 (7172) 57 14 08 (in - 1164)
Қазақша Русский English
THE MOST WIDELY READ
Month Year
Top 10 national dishes you should try in Kazakhstan Master class was organized for the workers of the National Museum of the RK at Botay settlement Jewelry art Women that left trace in the history of Kazakhstan Kazakh yurt – a house without corners The great Kazakh scientist-educator, historian, ethnographer Shokan Ualikhanov was born Kazakh wedding traditions: uryn kelu Cultural walk: Museum of Turkic Academy The story of one photo. Nikolay Panin Address of the President of the Republic of Kazakhstan. Expert opinion – B. Ayagan Cultural walk: in the footsteps of the Hero of the Soviet Union Timofey Pozolotin They proved that Kazakh Art was important for them
Philosophy of the Emblem President of Kazakhstan took part in the opening ceremony of celebrations dedicated to the 175th anniversary of Abai Kunanbayuly Abdurakhman Aitiyev and his struggle Nurmukhan Zhanturin. Actor who played himself Ydyrys Mustambayev. Defender of Abai and Magzhan Online documentaries Kassym-Jomart Tokayev sent a telegram to UN Secretary General António Guterres History of pandemic in Central Asia THE GREAT SON OF THE GREAT STEPPE What was the composition of the country’s Supreme Soviet of the XII Congress Armenians and their kinship with the Kazakh people Nurtas Ondasynov. Kunayev’s Chief
Polls
Materials on the topic
Labels of the Golden Horde khans and Russian clergy
From the story of a blood feud
A role of Buddhism in formation of Central Asian mythologies
The referendum on the Constitution is a significant stage of democratization