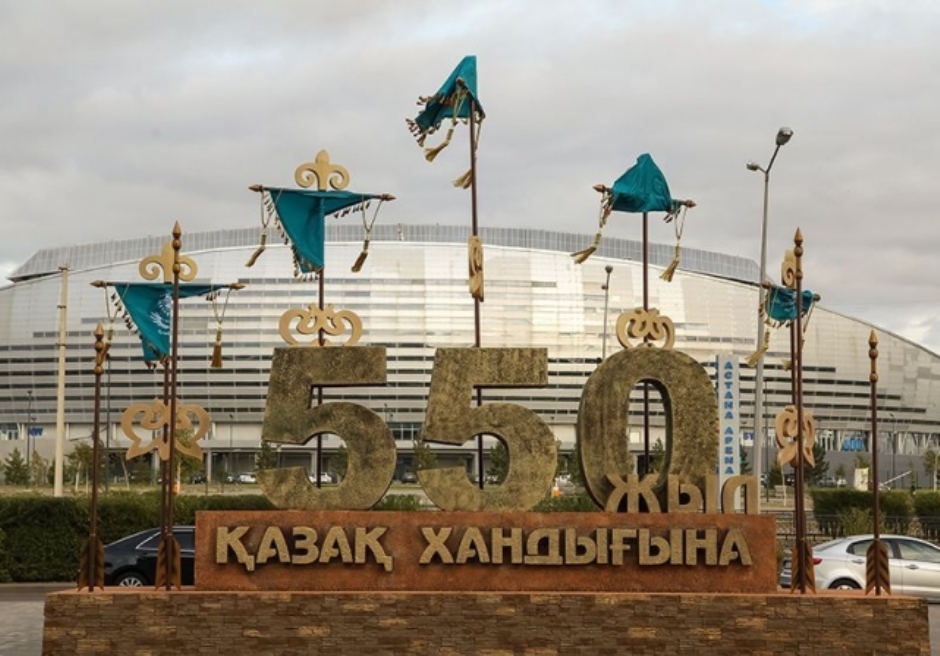 Over 2500 artists will perform on the scene, not taking into account the team of organizers, scenarists, technical assistance and more than 1000 volunteers.
On 11 September 2015 in the ice palace “Barys” the festive theatrical performance dedicated to the 550th anniversary of the Kazakh khanate will be fulfilled. The preparation to the national grandiose holiday is in full swing. It is worthy to note that at this celebration the huge number of people will be involved. Over 2500 artists will perform on the scene, not taking into account the team of organizers, scenarists, technical assistance and more than 1000 volunteers.
“Spectacular show, dedicated to the 550th anniversary of the Kazakh khanate is a great celebration. For the first time we tell about our history, and the theme of the presentation is “Mangilik el”. The performance is based on the book of the President RK N. Nazarbayev “In the flow of history”. Each artist certainly wants to participate in that spectacular show. Not only our notable artists, but also children — students of the Kazakh National University of Arts, for instance, the ensemble of violinists, ensemble of cellists, choir (150 people), actors, screenwriters and directors (60 people), trainees of the folklore ensemble. As a whole, in that theatrical performance 4000 artists are participating”, A. Musakhodzhayeva informed.
According to her words, the great stage show of the cultural character dedicated especially to the history of people, culture, and art is going to be conducted for the first time.
“The issue of setting is solved unusually, the directors of Kazakhstan, CIS, and from abroad were attracted. I believe, that the show will evoke the great resonance because the performance of the high level, it can be said of the world level, devoted to the historical national theme in Kazakhstan is being put for the first time”, rector highlighted.
Along with that A. Musakhodzhayeva notes that the main item of the program from KazNUA will be the performance of the ensemble ‘Aigolek" comprised of 150 people.
“Our actors perform in the style of the martial arts, participate in the historical scenes, depicting the development of our state. This concert shows the period from the Saka times till today, also the achievements of culture for the years of Independence. I suppose, the performance will interest guests and participants themselves”, she added.
“We are preparing for the great festivity dedicated to the 550th anniversary of the Kazakh khanate. In the setting there will be dances, scenes with the ritual of the “khan hoisting”. In general, we are going to grasp the 500-year-old history since the beginning of the ruling of Kerey and Zhanibek khans. We will show not only dances, but also the artist mastery, mastery of dombra playing. I consider that it will be a splendid show which one should see”, the artist of the ensemble of the folk dance “Altynay” of Almaty Regional Philarmonia named after Suyunbay Ershat Shokan shared.
And only in one scene devoted to the friendship of people the dance ensembles of Turkey, Azerbaijan, Uzbekistan, Kyrgyzstan will perform. Besides, popular artists of Kazakhstan will be involved. Among them are the group “KeshYou”, group “VoiceKZ”, Zhanar Dugalova, Dimash Kudaybergen, brothers Zhugunsovs, Almas Kishkenbayev and others.
“In the end we are going to sing one song. I will not tell you what song exactly. I observe the rehearsals, which are in full swing. As far as I understood the readiness is already 100%. I do not remember when at the last time I saw the show of such a level. I can say that is the level of the world standard. To celebrate such festivity for each citizen of Kazakhstan is the honour because it is the history, our ancestors whom we are to know. Thanks to them our republic is independent. That is why, it is necessary to celebrate such events”, Almas Kishkenbayev said. In his opinion, the stage show is, first of all, the great festivity for the citizens of Kazakhstan, secondly, the possibility of the acquaintance of the publicity with the history of Kazakh khanate and revelation of its historical role.
“In this colossal theatrical performance we would like to show all the wealth of our culture and history of our people. New musical compositions, new extracts of theatrical performances were written, the great footage was made, the great work of our scenarists, theatre directors was fulfilled. Nowadays, it would be very pleasant to us to see our esteemed guests, tens of thousands of representatives from the regions are coming to us. We are looking forward to that performance”, A. Raiymkulova said.
Moreover, she noted that the second stage of the events will continue in Taraz as the festive ceremony of the monument “Kazakh handygyna 550 zhyl”, ceremony of the opening of the museum "Kone Taraz’, also other cultural-mass events.
It is expected that the performance will be visited by the President RK and heads of foreign states being invited to the V Jubilee Summit of the Cooperation Council of Turkic Speaking States.
Use of materials for publication, commercial use, or distribution requires written or oral permission from the Board of Editors or the author. Hyperlink to Qazaqstan tarihy portal is necessary. All rights reserved by the Law RK “On author’s rights and related rights”. To request authorization email to mail@e-history.kz or call to 8 (7172) 57 60 13 (in - 1163)
Қазақша Русский English
MOST READ
Week Month Year
History of Wusun State and Yuezhi tribe Images of Women in the Works of Qazaq Poets-Zhyrau President of Kazakhstan took part in the opening ceremony of celebrations dedicated to the 175th anniversary of Abai Kunanbayuly Nurgissa Tlendiyev. Principal Conductor of Kazakhstan THE GREAT SON OF THE GREAT STEPPE What was the composition of the country’s Supreme Soviet of the XII Congress Ydyrys Mustambayev. Defender of Abai and Magzhan Abdurakhman Aitiyev and his struggle Where did Tengriism come from? Online documentaries Armenians and their kinship with the Kazakh people Today is Kazakhstan Police Day