Home News A bit about the Old Turkic script

A bit about the Old Turkic script 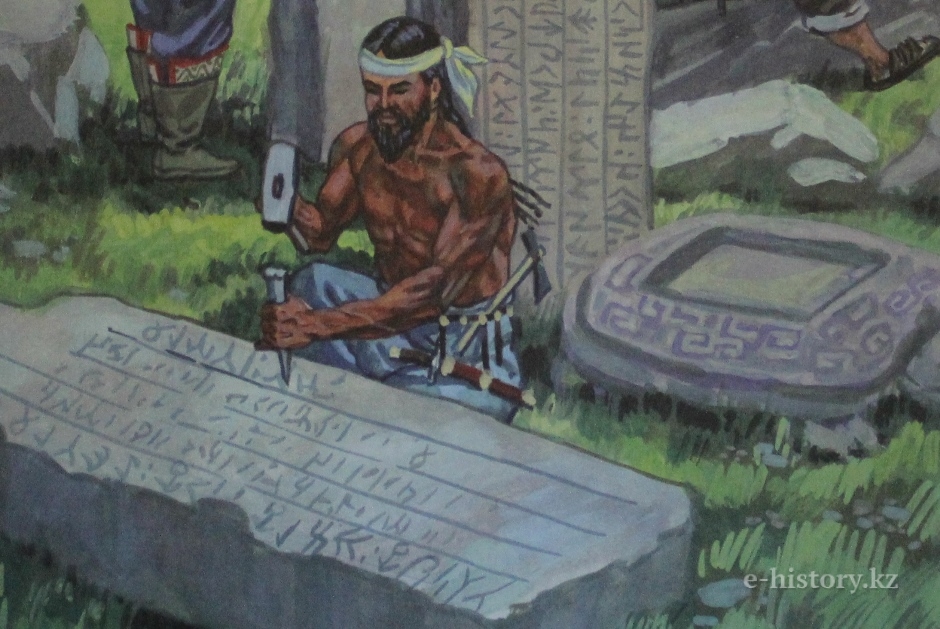 It is common to consider that the Old Turkic script was discovered and became available to the scientific world in XVIII c.
Old Chinese historians, speaking of the nomads of the northern Hunns, call them “hasak”. The same Old Chinese chronicles left no evidence on the existence of the nomadic ancient script. N. Y. Bichurin in his “Collection of evidence about people inhabiting Central Asia in the earliest times” writes in several places, “They have the silver coin with the image of the sovereign’s face. The notes are written on the vellum with transverse lines. ..... Before the graves the stone with the image of the deceased and writing in which all the war feats, their writings, letters are similar to the letters of the Hu (Hunns, Gunns).” And at the same place, on the other page, “The Turkic inscriptions remind the inscriptions of the Hu.” All those inscriptions are related to the period of instability, when the Empire of the Hunns was split, and the tribes moved to the Altai in II-V cc.

The fragment of the stele with the Old Turkic inscription.
The Scythians and Sakas, having richest material culture, Scythian gold and other similar items of art of the ancient time, comprising the whole philosophy and mythology expressed in the items of the “zoomorphic ornament”, did not have the script, alphabet or any other means to write or fix the reality. And the fact that no one thought of it revokes the bewilderment. At last, in the Issyl mound next to the Golden Man in 1970 the silver Saka cup with the inscription on it, was found. But, unfortunately, this inscription has not been decoded yet. 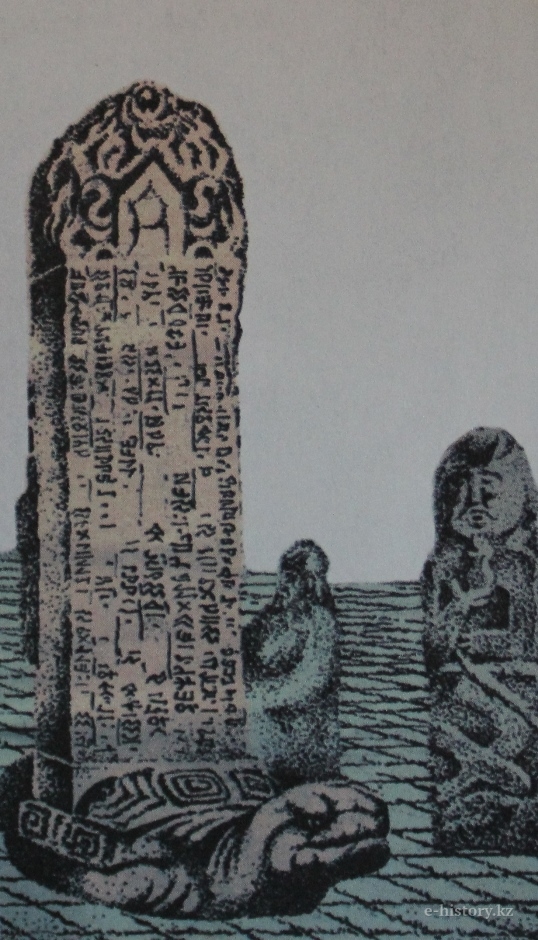 The Old Turkic steles with the Runic inscriptions
In the meantime, Herodotus in the tales about Scythian Anarkhisis, being related to seven sages of that time by the Greeks themselves, and in the novella about the tragic fate of the Scythian tsar Skil, it is narrated that the Scythians were literate people, that is could write and read in Greek. Anakharsis himself came from the Scythian land to Greece, Athens to the sage and strategist Solon for knowledge, not for anything else.
And he was sent to the Greeks by the tsar of the Scythians. It was the way, in any case, as Herodotus wrote. Thus, the Scythians were left in the history not only as the splendid warriors, but also as the people, from among whom great sages who knew writing and literacy, came out.
As the existence of the Scythian writing is arguable, it is necessary to say that the Greek and Scythian cultures had quite a huge influence on each other. The Scythians mainly were the nomads, they had enough land. And beginning with VIII c. BC the ancient Greeks started the colonization of the Black sea area, because the Scythians did not impeded anyhow. In the scientific terminology the period from VIII to V cc., when the ancient Greeks actively moved to the shores of the Black sea and founded there cities, was called as the “Great Greek colonization”.
The matter is that by the middle of the first millennium BC Scythia became the main supplier of grain for Greece. And Darius I, the Persian tsar, later his succesor Xerxes, before invading Greece tried to neutralize Scythia being economically connected with the Greek cities. And during those times Eastern Europe fed Central Europe. 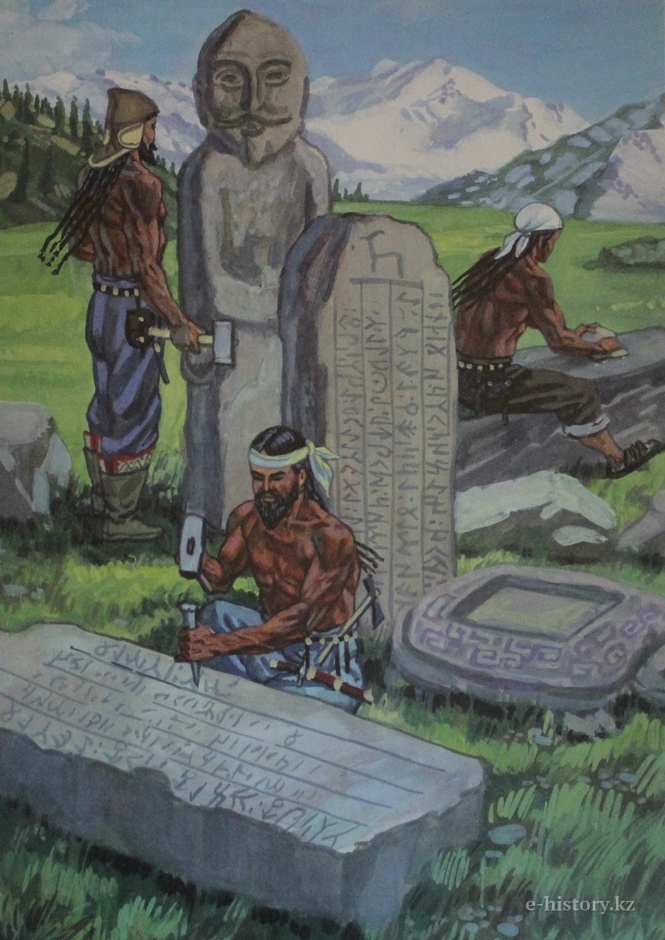 As the nomads did not have the alphabet, they used the Sogdian writing, the text itself was written in Turkic with Sogdian letters. The most popular among them was the Bugutsk writing which was hoisted at the mound in honour of one of the first kagans Taspar (572-581), approximately in 15 years after the embassy of Maniah. From the address to those reading this inscription it is seen that the Sogdian letter was widely known among the Turkic people of the kaganate, in the inscription it is told about the 13 year-old activity and deeds of Taspar-kagan. On the other side of the stone the translation of the text in Sanskrit (the ancient Indian language). Especially this Bugutsk writing we can name the oldest literary text, as the epitaph — writing on the tombstone is the genre of the literature. 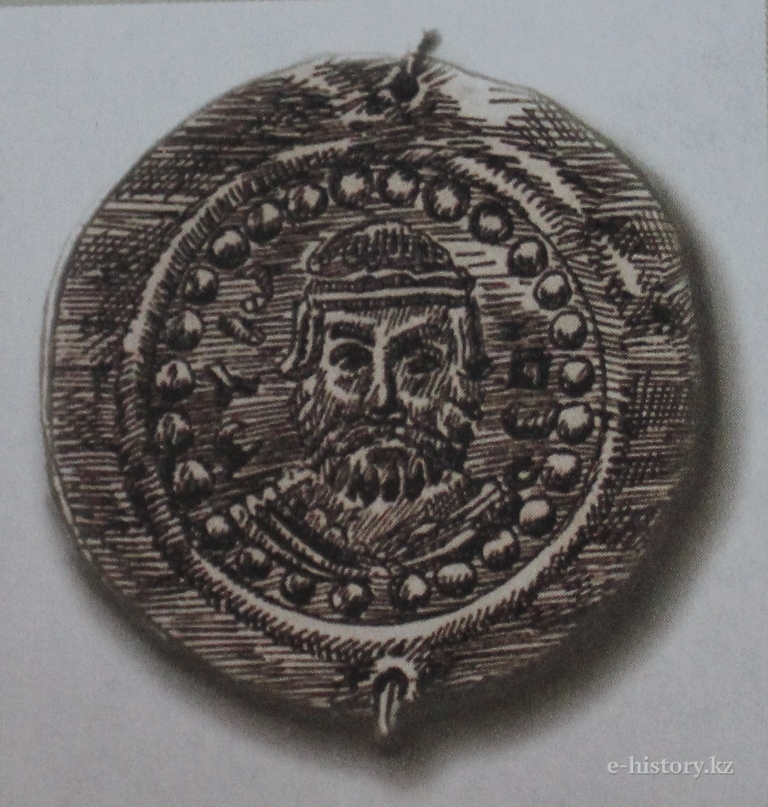 The Runic writing of the times of the Hunns on the medallion. VIII c. BC.
Nevertheless, it is common to consider that the Old Turkic writing was discovered and became available to the scientific world in XVIII c., when the German scientist D. Mesershmidt, being in service at Peter I and his companion, captured Swedish officer I. Starlnberg found the stelae with the cuneiform writings in the valley of the Yenisey. The texts were called runic, as they were similar with the Scandinavian runic writing.
“Rune” means the cryptography. In 1889 the Russian traveler, Sh. Ualikhanov’s friend, N. M. Yadrintsev with the help of local people revealed in Northern Mongolia, in the valley of the river Orkhon, the stone stelae with the runic inscription. In several years the Dutsch linguist V. Tomsen decoded these texts. The first word identified by him was “Tengri-God”. The text translated by V. Tomsen was the inscription about Kultegin and Bilge Kagan.
Use of materials for publication, commercial use, or distribution requires written or oral permission from the Board of Editors or the author. Hyperlink to Qazaqstan tarihy portal is necessary. All rights reserved by the Law RK “On author’s rights and related rights”. To request authorization email to mail@e-history.kz or call to 8 (7172) 57 60 13 (in - 1163)
Қазақша Русский English
MOST READ
Month Year
A tireless explorer of the Kazakh land
Karaganda coal and the merchant Ushakov The great son of the great steppe Kazakh dissidents: Amangali Kenzheakhmetuly, known as the “Gang” Kassym-Jomart Tokayev sent a telegram to UN Secretary General António Guterres History of pandemic in Central Asia Living for the Kyrgyz account The excavation works in the town of Syganak A death of Ulugbek Heroic mothers of the great steppe How had the World War II been started? 14 monuments at Tekturmas The rural akims: the country's hope is in the elections

Materials on theme
Mysterious birth of monument
Origin and status of Kazakhs’ “Ak suyek”
The story of one photo. Alexandra Loginova
The 5 most popular national sports in Kazakhstan