Home News Other A campaign “Memory is Eternal” has ended

A campaign “Memory is Eternal” has ended 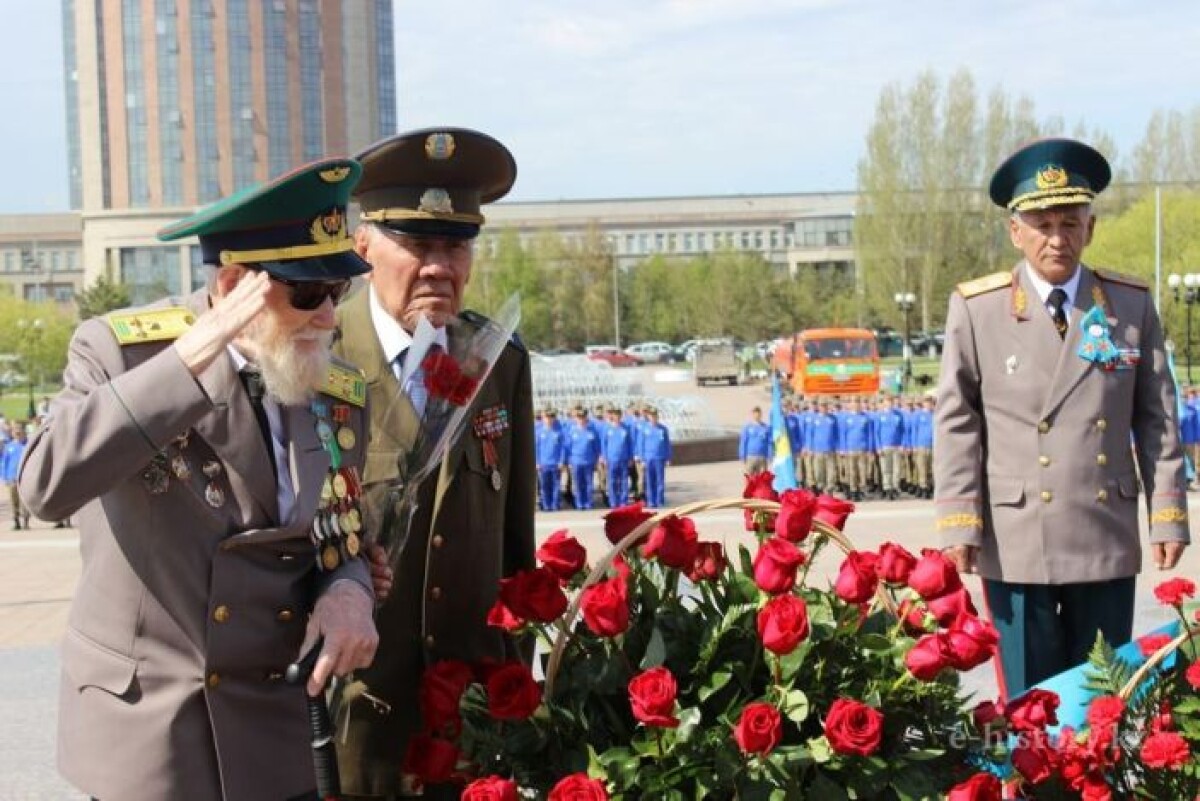 Astana hosted the closing ceremony of a campaign “Memory is Eternal”, dedicated to the 70th anniversary of the Great Victory, on 6 May 2015 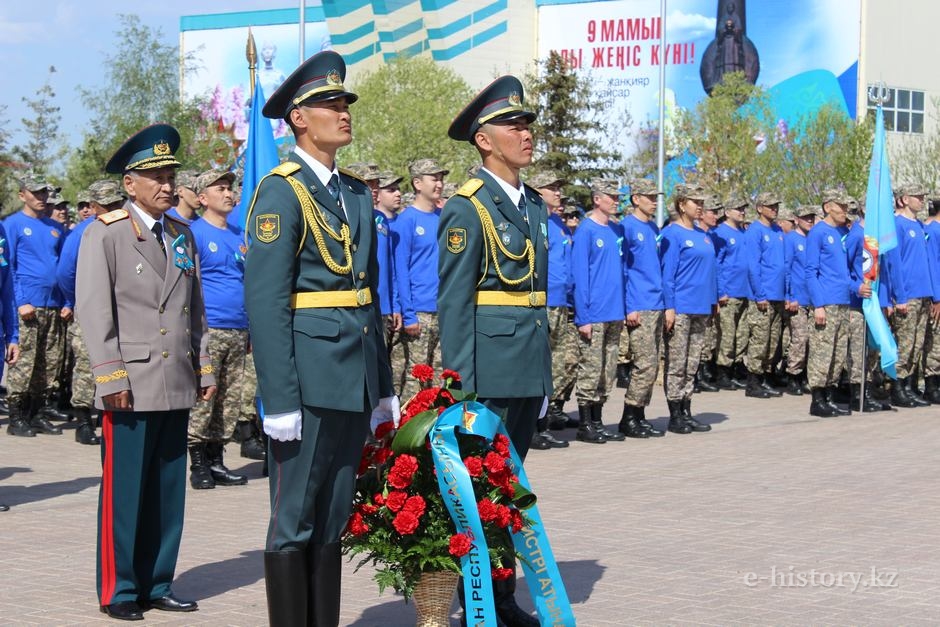 In January 2015, the Armed Forces of the Republic of Kazakhstan started the campaign entitled "Memory is Eternal", dedicated to the 70th anniversary of the Victory in the Great Patriotic War. This campaign consolidated several generations of Kazakhstan people, including those who witnessed the horrors of the war and people who know about the events only from the accounts of the elder generation.

This campaign became the basis for the photographic exhibition presenting pictures of the military personnel of the Regional Commands of the Armed Forces of the Republic of Kazakhstan and their relatives who were veterans of the Great Patriotic War.

The photos were presented on a special banner. The same constructions will be placed at most military bases. The exhibition demonstrated pictures of those who were killed on the front of the war, veterans who passed away and were still alive. The pictures were taken over the period from the 1930s to date.

The campaign "Memory is Eternal" allowed consolidating several generations of Kazakhstan people and learning about unknown before heroes of the Great Patriotic War, their unique stories and destinies.

All the received during the campaign photographs were gathered in a one picture in the form of a mosaic. The banner with portraits of the participant of the campaign was solemnly presented in the city of Astana, near the Otan Korgaushylar Monument, on 6 May 2015. 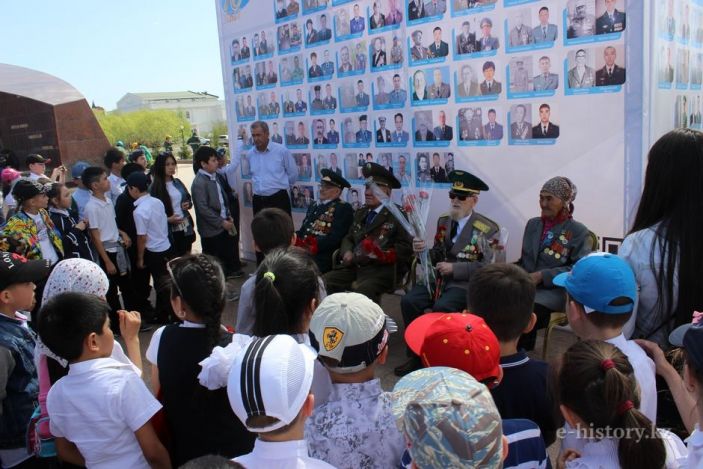 After the ceremonial presentation the military personnel of the Armed Forces of the Republic of Kazakhstan and veterans of the Great Patriotic War laid flowers at the monument devoted to defenders of Fatherland and observe a minute of silence in tribute to the memory of those Kazakhstan soldiers and officers who lost their lives during the terrible years of the war. 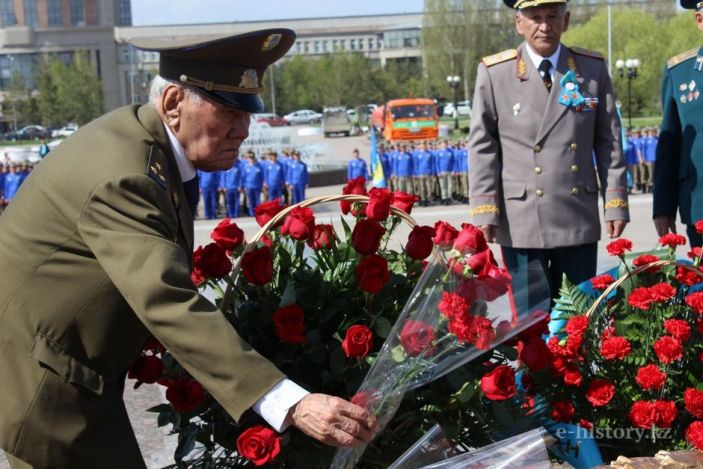 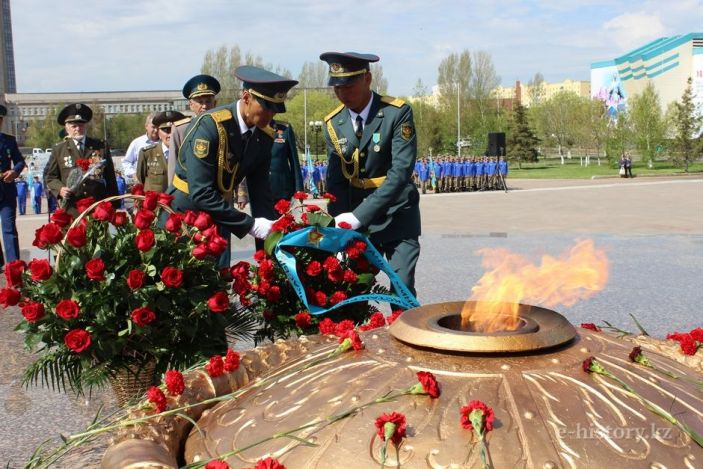 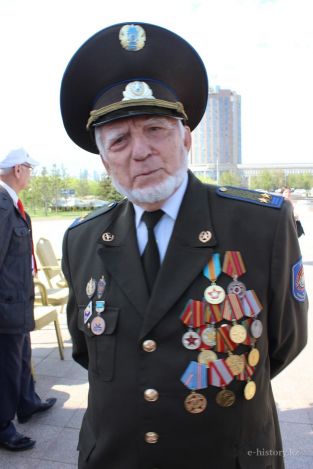 "I belong to the generation of children of the war. I was born in 1932 in the city of Almaty. I remember each moment of the war from the Molotov’s speech on the start of the war to the Stalin’s report on its end. I remember Malik Gabdullin, whose picture is on the banner now. He was one of the first Kazakhstan heroes. I remember those Kazakhstan people who defended Moscow, including Bauyrzhan Momyshuly. I remember the first book about the war — "The Volokolamsk Highway". For the first time, this book described the horrors of the war. The monument to which we are laying flowers today is unique and wonderful. This is the place where Astana residents come to pay tribute to veterans of the Great Patriotic War who passed away," Boris Alturin, retired Lieutenant Colonel, shared his view.

The patriotic campaign was followed by an athletic marathon. More than 600 officers of the Armed Forces of the Republic of Kazakhstan took part in the marathon.