Home News Other The story of one photo. Zholdas Dushambayev 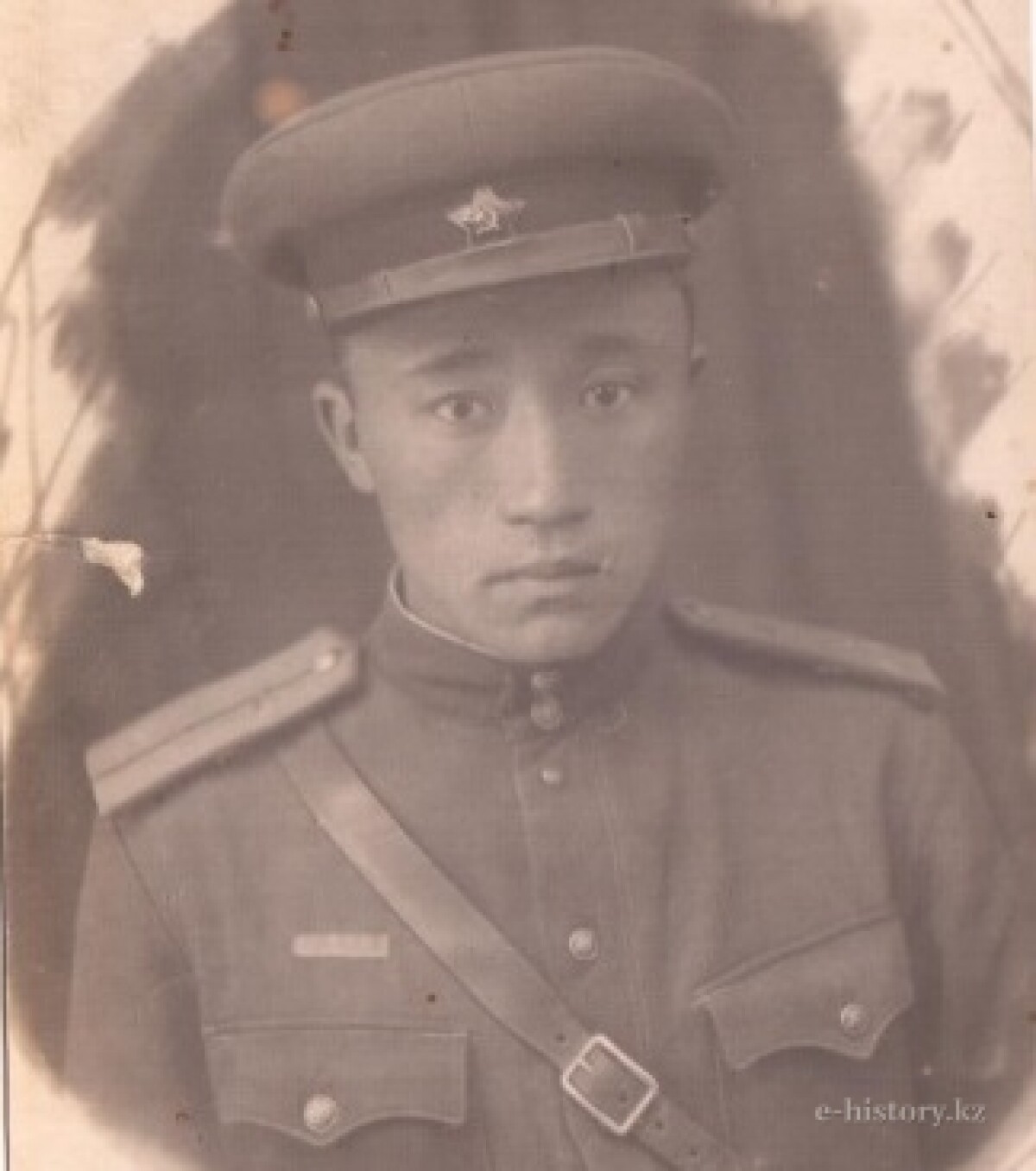 On April 1, 1943 my grandfather was wounded in the head by shrapnel. He was standing and lifting his hand to command “Fire!”. Suddenly a German rocket exploded not far from him 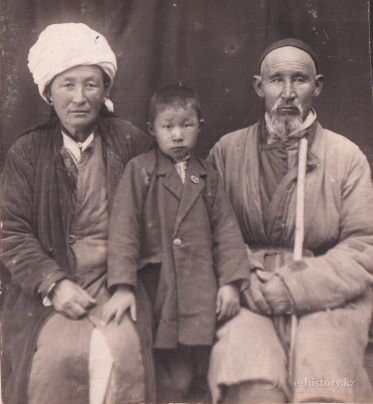 My grandfather Zholdas Dushambayev was the only who survived among sixteen children in his family. His younger brother Atabai died of tuberculosis at the age of 27. Other brothers and sisters passed away during their early childhood. According to the documents, my grandfather was born on 21 May 1920 in the village of Taza-Yarmysh, Tashauzsky area, Tashauzskaya region, Turkmen SSR in a family of farmers.

It happens that my grandfather went to the front voluntarily and was accepted into airborne units to be a sniper (the 20th Brigade). Later he was sent to the city of Saratov to undertake courses for officers in the evacuated Second Kiev Artillery School. The cadets were taught by the best officers who wished to prepare the following generation of commanders and went to the front. 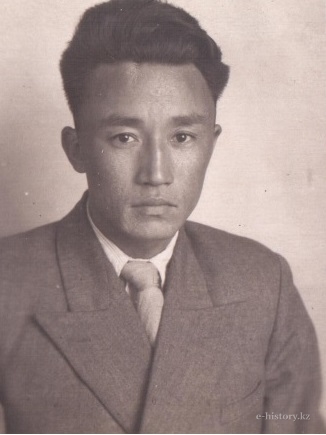 As in the whole country, there was no enough food. The most successful duty was chopping wood for the kitchen. The compassionate aged cook gave soldiers a cup of hot water and a piece of bread. Sometimes the old stoker offered them cured fish. My grandfather told that he saved soap and then exchanged it for a piece of cured camel’s hump. The student life would seem to be a paradise on the frontline. Meanwhile, he studied military science in the school. My grandfather had good marks in Math, Physics and related to them artillery calculations. He had some problems with Russian language. However, the wish to be a military expert and assistance of his mates helped Zholdas Dushambayev to overcome this difficulty. Though, he never learned skiing.

5 July 1942 came. It was the time to finish learning. On the one hand, the cadets were happy, but on the other, it was 1942 — one of the most difficult periods of defensive operations. The Soviet Army just repulsed fascists in the battles of Moscow. Leningrad was completely encircled. The enemy was still too strong and prepared offensive operation in the south with the aim to get access to oil in Baku. Each cadet knew the terrible statistics: a young officer fighting on the frontline might stay alive no more than one week. And everyone hoped to survive. My grandfather told what he thought at that period: if he would be wounded or even lose his legs may the hands be safe then he could become a shoemaker and be able to support his family.

Staraya Russa and Velikie Luki are the ancient Russian cities. That was the place where in winter and spring of 1942-1943 the Red Army was fighting against the enemy vigorously on the North-Western Front. The task was so easy and so difficult — to stand against the assault and do not allow the enemy to defeat Leningrad completely. There was the 480th Mortar Regiment of the 27th Army where my grandfather served as the Deputy Commander of Battery.

The winter months were best remembered for their frosts, blizzards, unremitting bombing of our positions, artillery and mortar fire. It was ordered to construct the defence, including several lines of tranches followed with positions of artillery and mortar batteries. The territory was attacked every day and night. Hundreds and thousands of soldiers died. The merciless fire was the response to German attacks. Those days and nights were accompanied with continuous, deafening noise of guns, when soldiers could not hear orders of commanders and had to guess, the death of friends with whom they smoked, slept and eat together. No one movie with great special effects can show the tragedy and dramatic tension of those days.

Being officer, once a month my grandfather received additional ration, including 100 grams of vodka or pure alcohol, a can of canned meat or fish, a pack of cookies, bag of sweets or sugar, two packs of cigarettes, soap and sometimes a bottle of cologne called "Shipr". Additional rations were rare and the giving out was the real holiday. My grandfather gave everything, except soap and cologne, to his soldiers. At that time, he didn’t smoke but cigarettes made the soldiers happy and remind them their life before the war and families. Each combatant received a small part of the ration. It was not so much, but the parts were equal. But most commonly they hadn’t enough food.

Winter cold was followed by spring thaw and trenches were full of water. In the daytime boots got wet and overcoats became too heavy because of water. At night, clothes became frozen. Zholdas Dushambayev recalled that they did not have an opportunity to dry shoes as battles didn’t stop. It was extremely difficult to serve in infantry units because combatants had to creep. The Red Army experienced the tremendous loss of human lives. According to some sources, the North-Western Front lost 1.5 million soldiers and officers within three months. Most of them remain unburied in forests and swamps.

In Turkmenia people also received those terrible notifications of deaths. My great-grandmother prayed daily for her son’s life and health. She saved her poor food, guarded her sheep and organized a special ceremony called kudaee: she cooked a soup with mutton and baked national bread. My great-grandmother gathered all widows, old people and orphan to share the food with them. The only thing she asked them to do was to pray for her son. Her sincere belief, boundless maternal love and compassion for people indeed saved my grandfather from death.

On the 1 April 1943 Zholdas Dushambayev was wounded in the head by shrapnel. Early in the morning, preparatory bombardment started. My grandfather was commander of a battery. He was standing and lifting his hand to command "Fire!". Suddenly a German rocket exploded not far from him, the shrapnel wounded frontal and parietal parts of the head. He remembered that the blood covered his eyes; he put the hand on his head and fell down. Until he lost consciousness, grandfather felt that somebody was dragging him into the trench. Later he learnt that his orderly and Uzbek soldier helped him and sent to medical and sanitary battalion. The doctor decided to wait with the operation because thought that my grandfather had no chances. In the same battalion, he had a surgery eight days later. He was sent to a hospital in the city of Yaroslavl in the late June 1943. 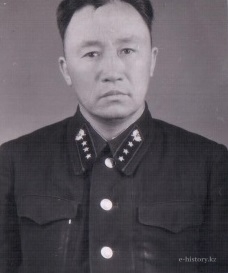 After a long-term treatment grandfather was discharged and returned to his native town. There he did a degree in law and worked in the prosecution services. In 1968 he moved to the city of Shymkent and had a long career as the Chairman of the DOSAAF (Volunteer Society for Cooperation with the Army, Aviation, and Fleet), was repeatedly elected the Deputy of the Council of Working Deputies.

In our family we treasure up the pocket-book where Zholdas Dushambayev wrote during his student years. He made some notes related to artillery in it and wrote down addresses of relatives of his mates to have an opportunity to inform about their death. 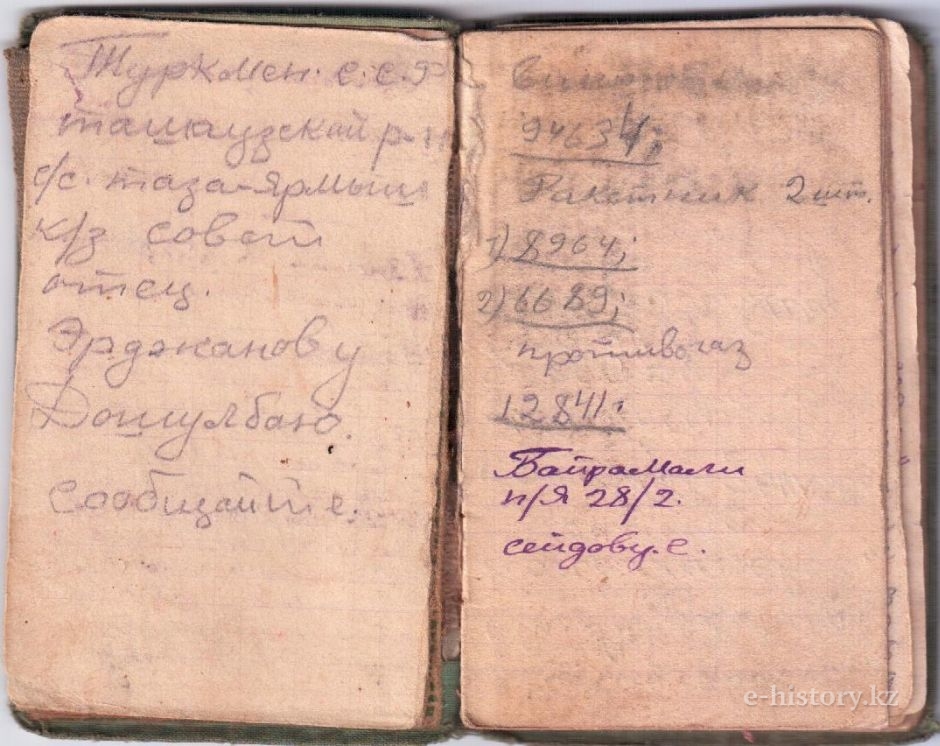 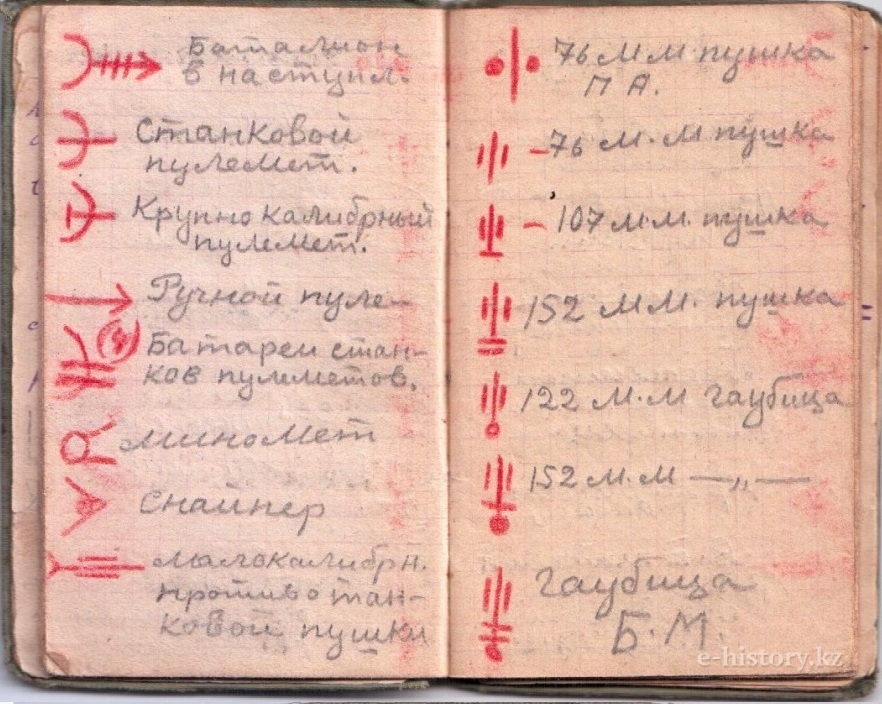 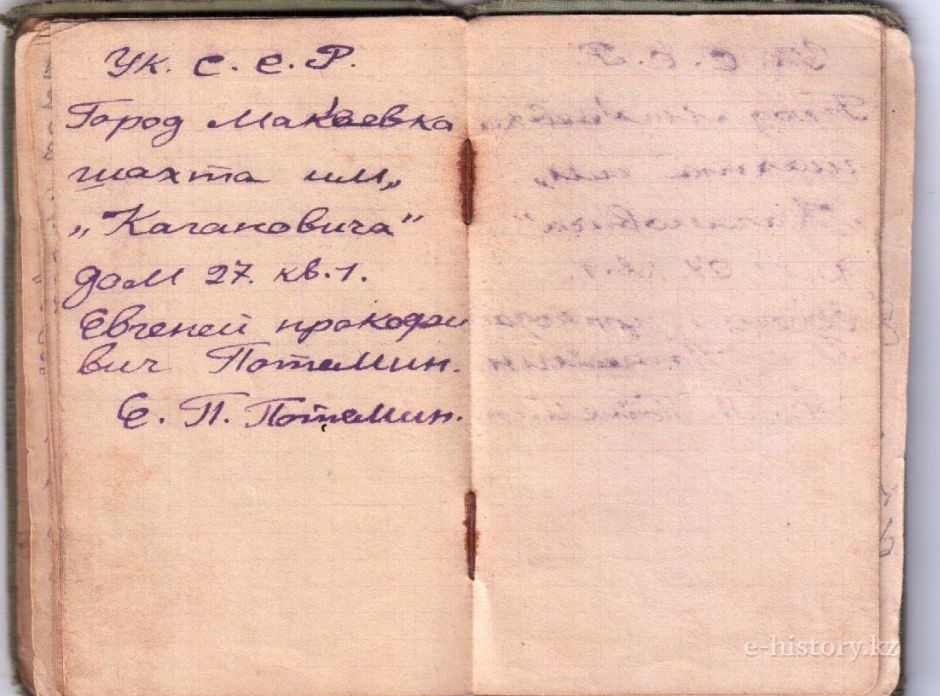 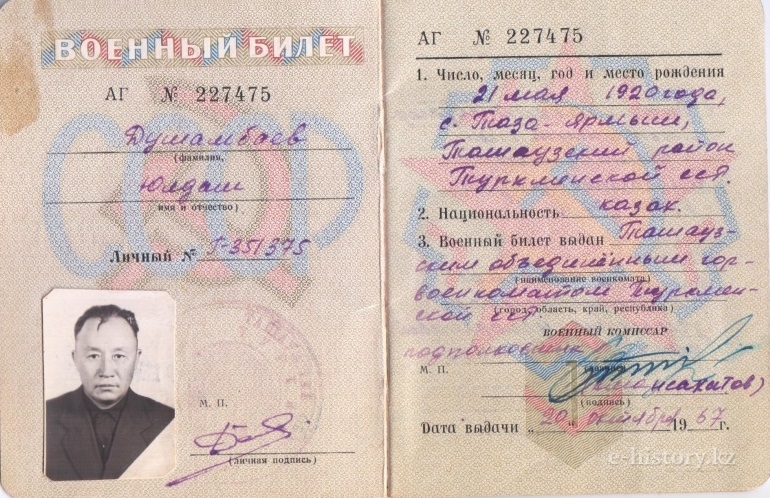 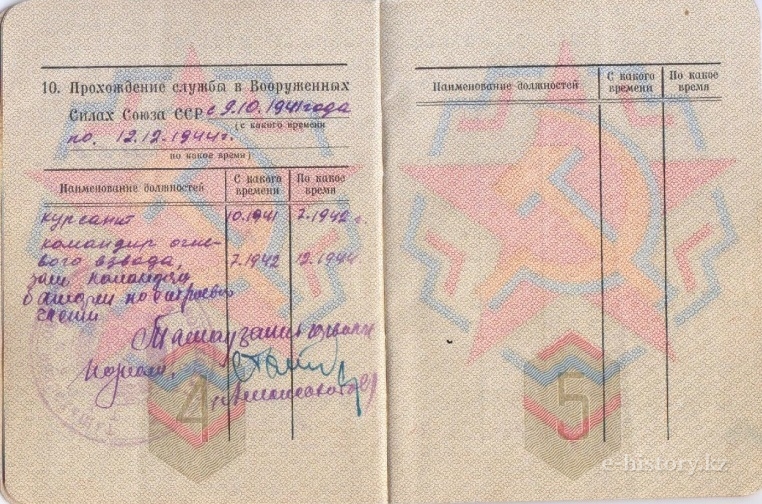