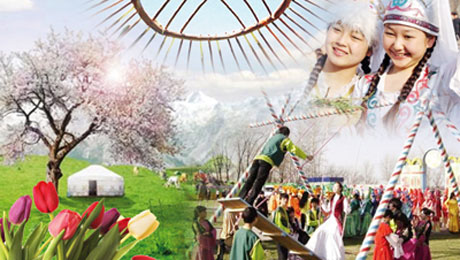 There are 315 Kazakh national games and 500 traditional sports. Our web-portal will tell you about the most popular of them which are held during Nauryz Meiramy.

For many centuries Nauryz has been celebrated in a traditional way: people serve a holiday table (dastarkhan), cook traditional meal called Nauryz Kozhe, hold rituals related to purifying and renovation, congratulate their relatives and friends and present them gifts, organise festivals and popular celebrations. Traditions of celebration Nauryz have remained almost the same over time. The only thing which is difficult today for Kazakhstan city inhabitants is to find aryk (small irrigation channel) and to plant a tree. Seriously, our people still know how to organise Nauryz celebrations and have fun.

Traditionally people started celebrating Nauryz at down. Men and women, youth and children gathered together under the guidance of old people. Men cleaned aryks, springs and wells, youth and old men planted trees and wished "May this tree remain in memory", "If you cut one tree, plant ten trees!’.

After the ritual, a zhyrshy (spieler) walked around houses and invited people to celebrate Nauryz. They dressed colourful clothing and could be in the role of heroes of Kazakh tales. And the celebration started. People visited their relatives and friends and congratulated each other, wished all the best, sang songs and staged holiday performances. Sometimes for fun men wrestled with women, young people competed in rapid speech and solved riddles. Celebrations of Nauryz have always been accompanied by popular national games and traditional horse competitions.

Traditionally people set Altybakan, a large hanging swing with colourful decorations, near their yurts. In the evening, young people came there to have fun and sing songs. Unmarried young men and women swung on Altybakan and their friends encouraged them with songs and jokes. Entertainment may last until midnight.

Certainly, the most favourite game of Kazakh youth was "Kyz Kuu" (chasing a girl). In this game, a girl rode a very fast horse to escape a Kazakh guy who tried to catch her and kiss on her cheek. Unsuccessful men were struck by a lash. Another interesting game was "Aykysh-uykysh" (facing each other), a comic competition between men and women. Kazakh youth, old people, men and women divided into women’s and men’s groups. A man and a woman went to meet each other, collided and changed their groups. The woman joined men’s group and her opponent became a member of a women’s group.

Young men demonstrated their strength and cunning in horse competitions. "Audaryspak" (wrestling on a horseback) was the most impressive national games. According to the rules, riders had to remove their opponents from a saddle. Only skilful and brave riders took part in dzhigitovka. Kazakh riders at full gallop stand up, jump to the ground and back to the saddle, pick up objects from the ground (such as coins, hats, etc.), shoot targets with various weapons, ride hanging on the side or under the belly of the horse and do other acrobatic feats.

The game "Kokpar" was a testing of strength, accuracy and rider’s skills. In this game, riders use their bare hands and lean to pick up a headless sheep or goat from the ground. They then race to the goal clutching the dead animal. Rather than using goal posts, large cauldrons serve as goals. Riders have to heave the dead animal over the rim of the goal in order to score. At the same time, other riders try to take away the goat to win the competition. The game may last until the evening and after that the winner had the right to show his booty and get presents for it. Bayga was another popular Kazakh traditional competition. There are many types of this long-distance horse race.

Kazakh kuresy (wrestling) was not just a martial art defining the strongest wrestler. In ancient times, this type of national competition served as a basis for getting military skills. Thanks to the wrestling Kazakh warriors improved strength and courage, endurance and deftness. "Togyz Kumalak" is one of the most ancient Kazakh games. Experts call it "Algebra of herders". To win a player should count quickly, know tactics and logic.

The first day of Nauryz celebration finished by a singing poetic competition called Aytys. In all the times, Kazakh traditions of oral competitions reflected the reality, artistically reproduced the historical essence characteristic for this social and cultural situation.

Materials on theme
The pre-release of the historical TV series “Baurzhan Momyshuly” was held in Astana.
Protection and use of historical and cultural heritage
Interesting facts about "Baikonur" Cosmodrome
The festival – competition of the ethnic cultures “History, culture”