Astana Opera performs concerts to the 70th Anniversary of the Victory 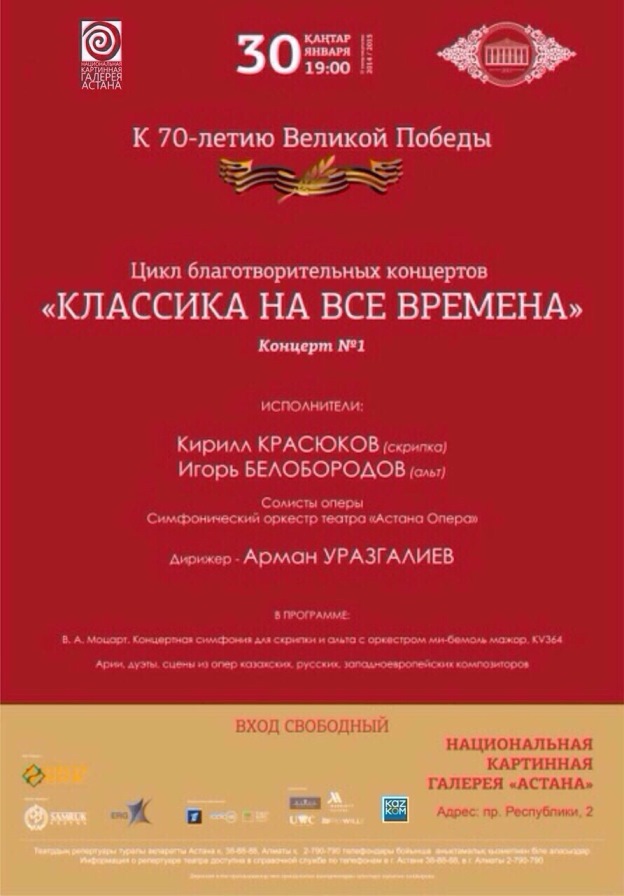 On January 30, 2015 Astana Opera launched benefit concerts “Classical music at all times” dedicated to the 70th Anniversary of the Victory in the Great Patriotic War.

The first benefit concert to celebrate the 70th Anniversary of the Victory in the Great Patriotic War was performed on January 30, 2015 in the concert hall of the National Art Gallery "Astana".

According to the official website of the Astana Opera Theatre, Abzal Mukhitdinov, musical director of the theatre, became the initiator of this event. "This year we are palling to perform twelve concerts dedicated to the 70th Anniversary of the Victory in the Great Patriotic War. The main purpose of this initiative is to give an opportunity to admire classical music to those who protected our Motherland. I mean veterans of the Great Patriotic War, workers on the home front and all of those who share our joy of this celebration. We do not develop the programme including the songs of the military theme. We will perform classical music with the aim to promote musical art. However, I would like to mention that on May 9, 2015 (in the Day of the Great Victory), as it is expected, we will organise a concert aimed at honouring veterans" — maestro Abzal Mukhitdinov told.

The programme of the concerts entitled "Classical music at all times" includes famous works written by W. A. Mozart such as Sinfonia Concertante for Violin, Viola And Orchestra in E-flat Major, as well as arias, duets and scenes from operas of Kazakh, Russian and Western European composers.

Our website reminds that this year marks the 70th Anniversary of the Victory in the Great Patriotic War. The Nazi invasion of the USSR in June 1941 heralded the beginning of the most titanic battle in the history of humanity. The war ended in complete defeat for Nazi Germany less than four years later with the fall of Berlin on May 9, 1941. Over 20,000,000 Soviet citizens and soldiers died in the struggle to liberate the Motherland from the fascist aggressors.

Kazakh people fought in the Great Patriotic War (1941 — 1945). During this war, when Kazakhstan was one of the fifteen republics of the Soviet Union, the attack by Nazi Germany on the Union of Soviet Socialist Republics was seen in Kazakhstan as an attack on the motherland. Although German armies never reached the territory of Kazakhstan, patriotic spirit was so strong that hundreds and hundreds of Kazakh men and women fought on the front lines of the Great Patriotic War.

It is interesting that two Kazakh women who took part in the battles of this terrible war and died like heroes, Alia Moldagulova (1924-1944) and Manshuk Mametova (1922-1943), were the only Central Asian women to receive the "Hero of the Soviet Union" award.

Use of materials for publication, commercial use, or distribution requires written or oral permission from the Board of Editors or the author. Hyperlink to Qazaqstan tarihy portal is necessary. All rights reserved by the Law RK “On author’s rights and related rights”. To request authorization email to mail@e-history.kz or call to 8 (7172) 57 60 13 (in - 1163)
Қазақша Русский English
MOST READ
Month Year
Kazakh historical drama Tomiris premiered in Istanbul
ALASH IDEA IS THE PROTECTION OF KAZAKH STATEHOOD
Stolypin about the worries and hopes of immigrants to the Kazakh steppes
A tireless explorer of the Kazakh land
SWITCHING TO THE LATIN ALPHABET – UNITE ALL KAZAKH PEOPLE
Kunaev Dinmukhamed Akhmedovich
People who eat horses will kill you
Kazakhstan's participation in the Winter Olympics has a long history
Rebooting a field of science and education
Recorded history of Kazakhstan. Part 1
Historical Dates on the Bosphorus
Recorded history of Kazakhstan. Part 2
Materials on theme
In the Library of the First President the “Celebration of the Dynasty of Labourers” was held
Images of Women in the Works of Qazaq Poets-Zhyrau
The old timer-building. “Green” mosque
Presentation of the book "Words which changed Kazakhstan"