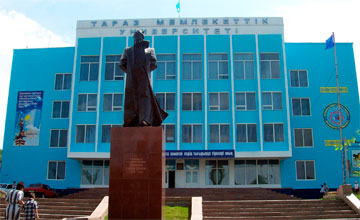 The republican scientific and practical conference devoted to the 120 anniversary of the statesman of Kazakhstan and Central Asia T. Ryskulov brought together domestic and Russian scientists in Taraz

The republican scientific and practical conference devoted to the 120th anniversary of the public figure of Kazakhstan and Central Asia Turar Ryskulov brought together domestic and Russian scientists in Taraz.

The conference was held on the eve of the Independence Day of Kazakhstan in Taraz State University named after M. Dulati.

Akim (head of local government) of Zhambyl area Erkanat Manzhurov, who spoke with welcome speech, emphasized that Turar Ryskulov, who was born in December 1894, in the natural tract Besagash of Almaty region, from 1907 to 1910 studied at Merke Russian-Kazakh boundary school of the Aulie-Atinsk district (now Zhambul area). In Merke the participant of national liberation revolt of the people of Central Asia, young Turar Ryskulov organized society "Bukhara" (the revolutionary union of the Kazakh youth).

According to the president of the Union of scientists of Kazakhstan and the winner of State Award of Kazakhstan the academician Orazaly Sabden, Turar Ryskulov is one of the first founders of future political and economic independence of the Central Asian republics and Kazakhstan.

"At the age 25 he already was extraordinary person, purposeful person with high performance and devotion, the fearless fighter for the truth and justice. By his initiative in Kazakhstan was build the Turkestan-Siberian railroad, the powerful industrial centers — coal-mining and metallurgical complexes of Karaganda were created, nonferrous metallurgy of East and Southern Kazakhstan, the oil and gas industry of the Western Kazakhstan. On the territory of Kazakhstan and Central Asia large national reserves of all-Union value were organized" — said O. Sabden.

Moreover, the Kazakh Pedagogical Institute (now Kazakh National Pedagogical University named after Abay), the veterinary institute, teacher’s colleges in Tashkent, Pishpek and Turkestan University (Tashkent, the SAGA) and the Communistic University of Workers of the East (CUWE) were opened by the support of T. Ryskulov. Development of the industry of Central Asia and Russia also connected with the name of T. Ryskulov.

During the mass Stalin repression T. Ryskulov was declared as the enemy of the people and shot on February 10, 1938. In 1956, the outstanding song of the Kazakh people was rehabilitated posthumously.
Among guests of the scientific and practical conference devoted to T. Ryskulov’s 120th anniversary were the doctor of historical sciences, professor, the leading expert of Institute of the Russian history of the Russian Academy of Sciences Dina Amanzholova, the president of the International Turkic academy Darkhan Kydyrali, the director of Institute of oriental studies, the Doctor of Philosophy, professor Absattar Derbisali, professor of KAZNPU named after Abay Mekemtas Myrzakhmet. T. Ryskulov’s grandson, the Moscow teacher Vladimir Ryskulov also arrived.