Home News Other When did clothing of Kazakh paluans (wrestlers) appear?

When did clothing of Kazakh paluans (wrestlers) appear? 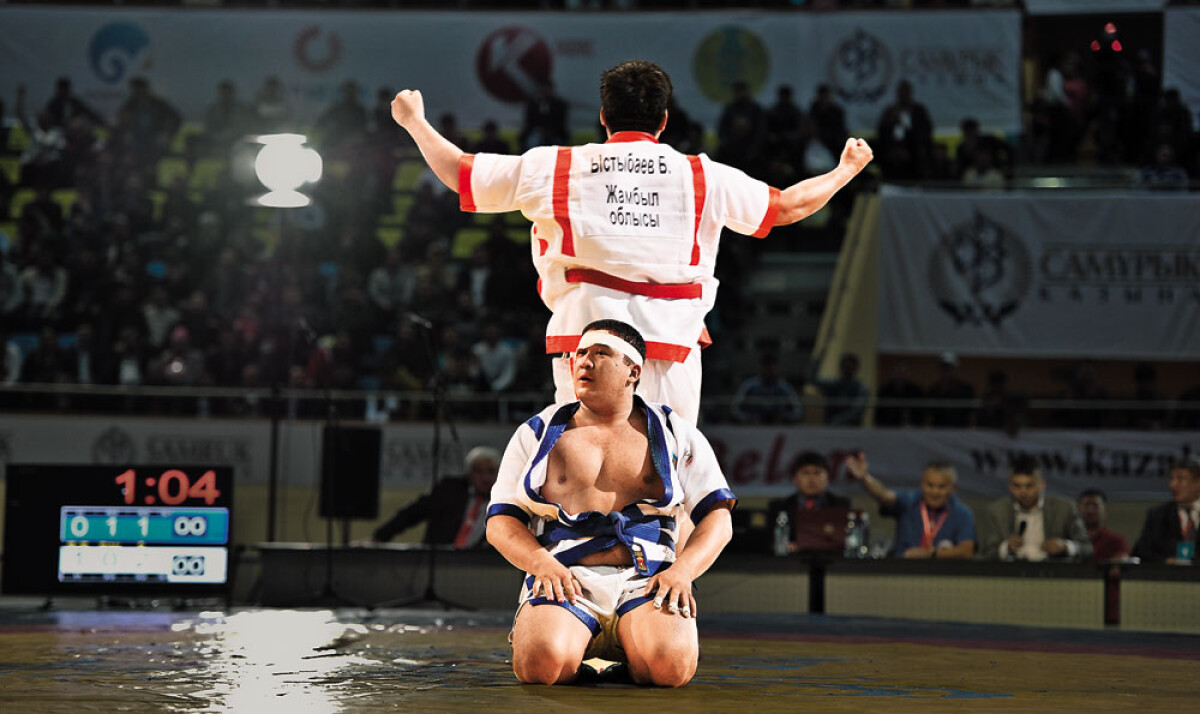 “Since ancient time and up to now I haven’t encountered any historical fact that Kazakhs made special clothes for wrestlers” – tells Merited Coach of the Republic of Kazakhstan Yelemes Alimkhanov.

This article continues the discussion of traditional sports and martial arts of the Kazakh nation.

Competition of paluans was an integral part of life of people inhabited the territory of modern Kazakhstan in the middle of the 2nd millennium BC. Varieties of traditional sporting competition of Turkic people have one common root what we discussed before. However, the main difference of Kazakh wrestling is that paluans compete only in stance.

However, Kazakh kuresy (wrestling) is not just a martial art defining the strongest wrestler, pide of nation, not just a favorite show accompanying each toi (celebration). In ancient times this type of national competition served as a basis for mastering military art. Thanks to the wrestling Kazakh warriors improved strength and courage, endurance and deftness, and quite often competition of paluans predetermined the result of military battle.

Nevertheless having deep traditions and long history the main wrestling of Kazakh nation was officially named only during the Soviet period; many times it faced change of rules while common dress for wrestlers didn’t exist at all.

In his interview for our web-portal Yelemes Alimkhanov, creator of uniform for wrestlers and Merited Coach of the Republic of Kazakhstan, recalls that in the end of 1990s for the first time wrestlers put on special clothing.

Yelemes Alimkhanovich, as we know, there were no any special clothes for Kazakh wrestling: sportsmen competed booted or dressed in a jacket or with naked chest. Tell us about your work on the creation of uniform for Kazakh wrestling which became known in the world.

— Since ancient time and up to now I haven’t encountered any historical fact that Kazakhs made special clothes for wrestlers. Perhaps, there are no such facts. Eposes do not contain any mentions about uniform produced for paluans. I wondered: “Why?”

In the early 1990s huge delegation, including journalists, operators, historians, came from Japan to Almaty. At that time the Ministry of Sport still was located in Almaty. They came especially for shooting Kazakh wrestling. It was summer; everything was organized on the lawn in front of the circus. 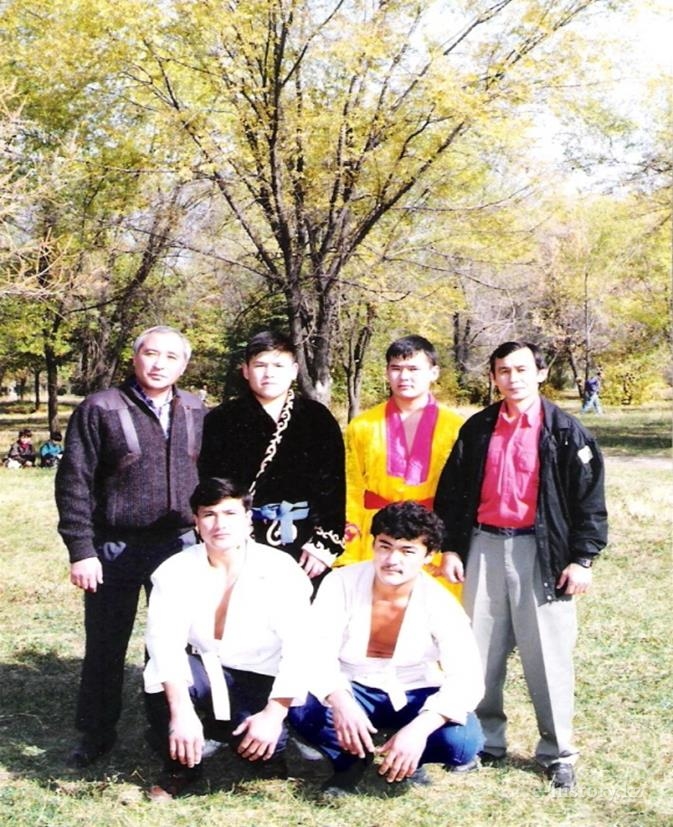 Before 1990s paluans competed dressed in jackets for Sambo or kimono for Judo. It was their way. We dressed sportsmen and started demonstration of technical moves. Foreign journalists looked at this attentively.

20-30 minutes later when we were already tired of it they asked us: “When will you start showing the national wrestling of Kazakhs? It is our Judo and Sambo”.

Only then we realized that clothes and attributes of wrestling were essential. I said: “One minute, please, this was warm-up”. The Drama Theater named after M. Auezov is situated across the street from the place of competition. We ran there and asked chapans (traditional clothes), dressed sportsmen and fastened belts. Looking at our wrestlers the Japanese exclaimed with enthusiasm: “This is another story, now it is really your national wrestling”. And we demonstrated all techniques again.

This started my research work. With the aim to obtain any results it was necessary to understand what the main differences between Kazakh wrestling, Sambo and Judo were. Judo jackets has 2/3-length sleeves, in Sambo they reach sportsmen’s wrists, while in Kazakh wrestling — reach elbows. I began examining national clothes of Kazakhs. I noted that batyrs (warriors) worn clothing with short sleeves. It appeared that during the fight rival could easily grasp long sleeves. In this case everything was lost. I realized, it was no coincidence that batyrs put on such clothes.

Modern clothes of wrestler are a copy of torgauyt — this was a name of batyr’s clothes. It included trouser-legs to the knees and jacket with short sleeves. Before the adoption of final version of uniform we tested all variants, and short sleeves were very convenient for stance. In 1996 I defended candidate thesis on “Influence of wrestler’s clothes on his technical training”. I obtained good reference; I own international patent and this uniform is being introduced steadily. Now looking at our sportsmen dressed in uniform the whole world knows that this is Kazakh wrestling.

Kazakhs have the following proverb: “before competition wrestlers roll up sleeves and trouser-legs”. It is natural preparation before the fight. It also influenced the uniform of wrestler. Other nations, such as Mongols, Yakuts, Georgians, Kyrgyz, Uzbeks, had special uniform for wrestling. Kazakhs competed in ordinary clothes or agreed upon getting on chapans either with belt or without it.

To enter the international scene wrestlers should have their national clothes and rules. Before adoption of final version of uniform we conducted many championships in different variants of clothing. We tested 10 variants of wrestling uniform. 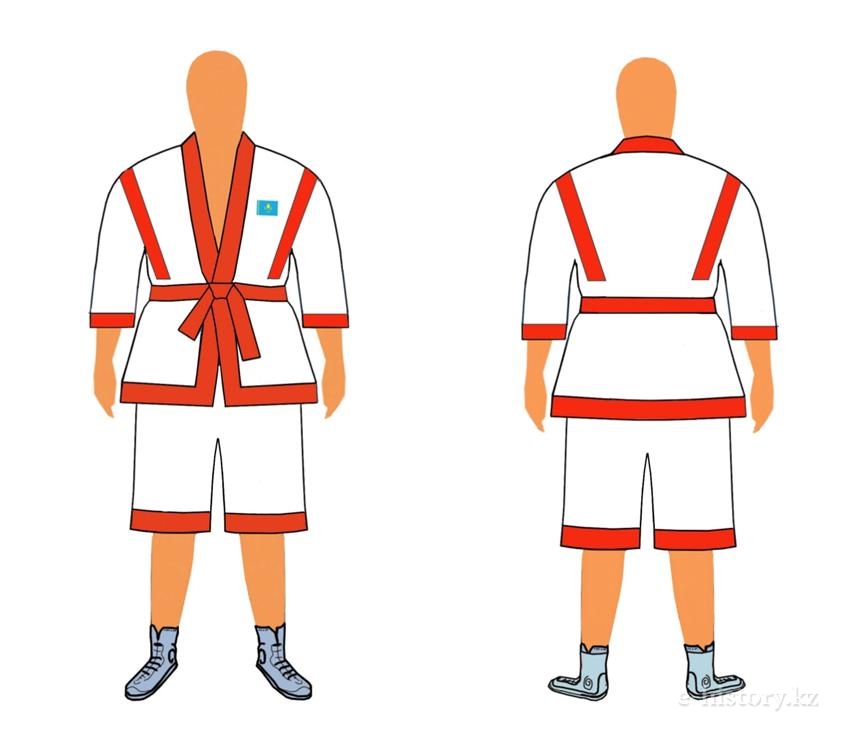 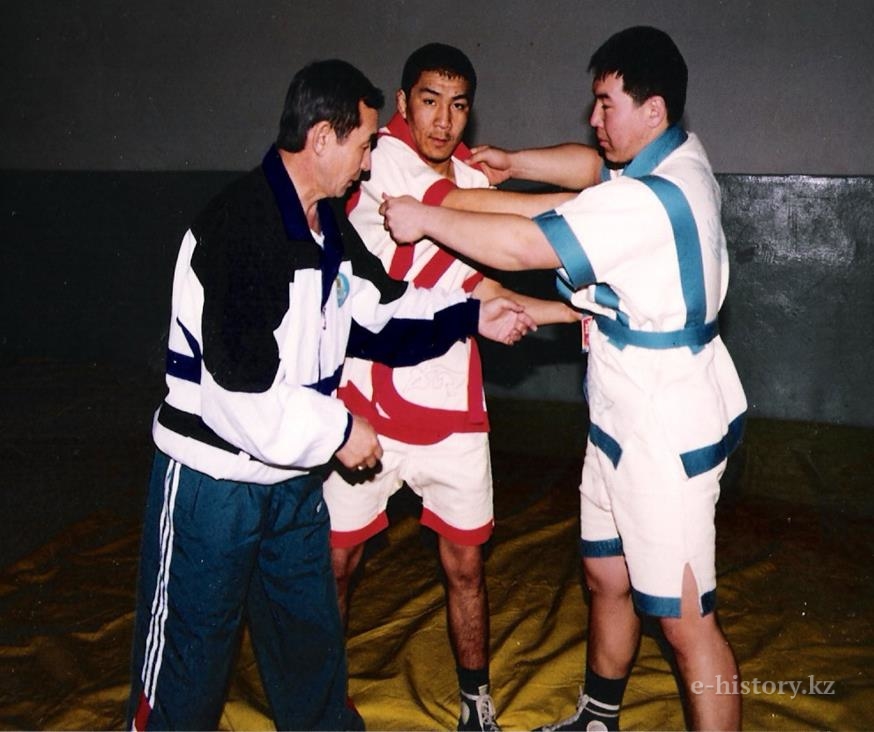 Wrestler tests uniform, 1996 (from the archive of Professor Alimkhanov)

Expert opinion:
President of the Kazakh Wrestling Federation Vladimir Rezanov: "When I applied for recognition of Kazakh wrestling to the Russian Sport Committee I had to prove differences between Kazakh wrestling, Sambo and Judo. I started looking through historical pictures of wrestlers, goat polo, and so on. All of them had clothes with short sleeves. Professor is right there were no professional (in the modern sense) sportsmen and, accordingly, common uniform for them, they had only clothes with short sleeves — chapan. Now we have official name — baluan torgauyt (baluan — wrestler, torgauyt — batyr’s defensive clothes). Short sleeves do not obstruct to react rapidly, grasp or repulse.

Did wrestlers constitute separate class like batyrs, for example?

— Batyrs were particular social group. They proved their title during battles; wrestlers as well as akyns (poets-improvisators), zergers (jewelers) and weavers also form separate class. Each aul (village) and clan had paluans. If not it meant that clan was weak and powerless as nobody could defend these people. Not everyone could be considered as paluan, strong man, this title was given by people and should be deserved.

Yelemes Alimkhanovich, is it possible to say that paluan’s strength could be passed on to his descendants?

— For example, Khadjimukan. He was world-famous wrestler and won 49 golden medals in international competitions. His son graduated from institute of physical education, wrestled but didn’t become professional sportsman. Not always the nature passes talent from father to son; it can appear in the 7th generation. Khadjimukan’s physical appearance was passed to his son while natural strength not.

Today Khadjimukan’s grandson is famous singer and musician. Probably, his son would become a wrestler and Khadjimukan would come back.

For a time I worked on selection of children and substantiation of their goodness to particular sport. It appeared that this question was investigated by German scientists and they still work on it but the results are not published. Abilities and inclinations could be detected from their earliest days. There is a special method and physiological examinations allowing recognize them.

Active rebirth of Kazakh wrestling as a national sport began in 1990s. What significant blanks can be defined in this process?

— Before the Independence Kazakh wrestling had points scoring system as in Sambo. Therefore, when we loved in one Union Moscow dictated that all types of wrestling of Societ nations should be based on it. Before that Kazakh wrestling didn’t have point system.

For the first time in 1929 the rules of Kazakh wrestling appeared in written form. Only then classes of weight were introduced. Carpet — a place of wrestling and refereeing were brought in during the Soviet period. Kazakh wrestling didn’t have weight classes before, wrestlers of 50 and 100 kilograms in weight could compete.

Paluans were those who had huge weight and strength. If you are brisk and quick you have to possess appearance of strength. There were only three results, including victory, defeat and draw. It is interesting that Japanese Sumo wrestlers also have a draw. When it is impossible to define who won they are given another chance to fight. Our wrestling has the same rule; it is called “it shygys”. Sometimes paluans could not beat each other then it was considered to be equal wrestling, there were no winner. This fight could be postponed till next day or month and even year when wrestlers could continue competition.

At the time of Ivan Poddubny wrestlers fought for 6 and 12 hours. This was common; the fight could be continued the next day. Khadjimukan wrestled in such way. Of course, circus elements were used to awake people’s interest and gather them the next day. People came and paid money again.

To come back to the question I do not agree with latest reforms in the refereeing taken from Judo; I believe that we should not copy that. I am against that because every wrestler’s action should be evaluated — he works. If he puts his hands on floor it isn’t taken into consideration, and if he falls to his knees, it is counted. And sportsmen need energy and technique to drop rival. And it doesn’t matter whether he falls to his hands or knees it should be counted then he wouldn’t fall. Why Mongolian wrestle is so popular? Every contact with the floor means defeat.

Inactivity isn’t a beauty; wrestling should be beautiful and philosophical, i.e. strength, honesty and technique should be in it. We lost a lot of our traditions. In my thesis I wrote that during the Soviet period there were no any information about national sport in school program and program of sport schools. And today I count 315 types of national games, and this is if we do not take into account how many we have forgotten. Each game is useful and we have to understand their psychological and applied function. In asyk I counted 40 components which develop deftness, accuracy, balance, mathematical logic, and so on. I give my master students work to examine biomechanical features of national games.