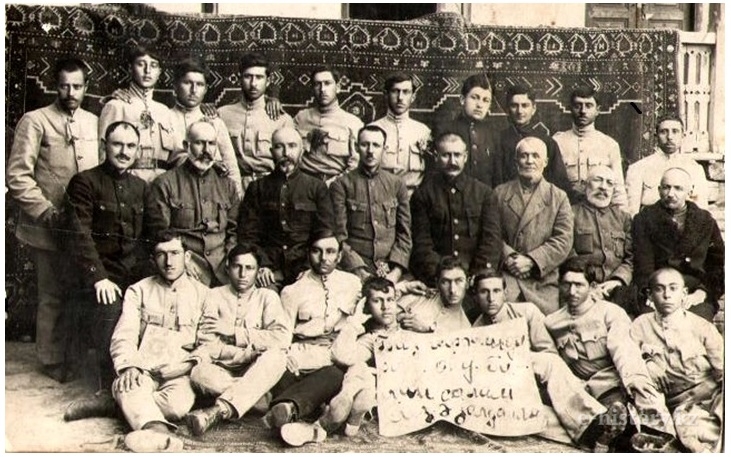 Advancement of Oghuzes from the shores of Syr Darya to the West, made a powerful impact on ethnogenesis in all regions on the way of their camps. The wave of Kipchaks followed them closely. It is notable, that local names migrated as well.

Transcaucasus was known to Kazakh Khanate. Famous Kazakh writer and historian Mukhtar Magauin wrote, «in the X century, a big group of kipchaks leaded by Atyrak khan, settled down in the very center of Caucasus — between Armenia and Georgia, in a wide valley in the upper reaches of Kura». Proto-Kazakhs created independent ulus — Kazakh khanate, suppressed Byzantium, fought against Arabians, formed an alliance with Oghuzes; state existed for 150 years, waging continuous war with the Kingdom of Kartli, but Transcaucasian Kazakhs, like their Oghuz brothers, did not come to agreement and were defeated by Iran.

With the lapse of time, kipchaks assimilated with kin oghuzes, of the same religion and language. Now this area is called Kazakh district of Azerbaijan.

Many monuments of kipchak sojourn have been preserved in Armenia. Transcaucasian region is distinguished for preserved balbals, which depict not just people, but also horses with kipchak saddles and stirrups.

In Armenia, the Turkic-kipchak period is acknowledged, but interpretation is somewhat different, «In XVI Persian shahs lodged Kazakh tribes and Shamshadin tartars on Armenian pastures to secure their rear against rebellious Christian nations, Armenians and Georgians, since then former Armenian provinces assumed their names." («Republic of Armenia, Tavush Region, History», tavush.am/history).

There are some interesting data about events of the XVI century, when Uzbek Ubaydulla-khan called for help from Kazakh khan Kassym, to fight against Ismail Shah. Kassym sent an army leaded by his son Abulkhair, but Ismail defeated it. When the army was retreating beyond Ceyhun, Ubaydulla people drew ferry off and 30 thousand people stayed on the shore and possibly were taken prisoners. There is a version, that those people became Azerbaijani Kazakhs.

At large, since the period of Kazakhstan’s inclusion into Russian Empire, interrelations between Azerbaijan and Kazakhstan had been insufficient. Collaboration was established only when non-Russian nations of Russian Empire were given the right to take part in the work of State Duma, at that time contacts between Kazakh and Azerbaijani intelligentsia occurred within the frame-work of Muslim group.

During the Soviet period, authorities tried to restrict contacts between kin nations, nevertheless sometimes they happened, Azerbaijanians say, that edition of O. Suleimenov’s book «AZ-i-IA» played an important role in development of relations between nations.

After the beginning of Karabakh conflict between Armenia and Azerbaijan, Kazakhstan tried to restore peace in the region. On September 22, 1991 the Head of State Nursultan Nazarbayev visited Karabakh with an intermediary mission.

On November 20, 1991 helicopter with members of Russian and Kazakhstan peacemaking missions aboard, was shot down near Karakend village, Azerbaijan put the blame on Armenian fighters, while Armenia claimed that it was a wreck. Still, Kazakhstan keeps adhering to the position of Azerbaijan territorial integrity. That is why N. Nazarbayev restricts membership of Armenia in Customs Union by dissenting opinion over Karabakh.