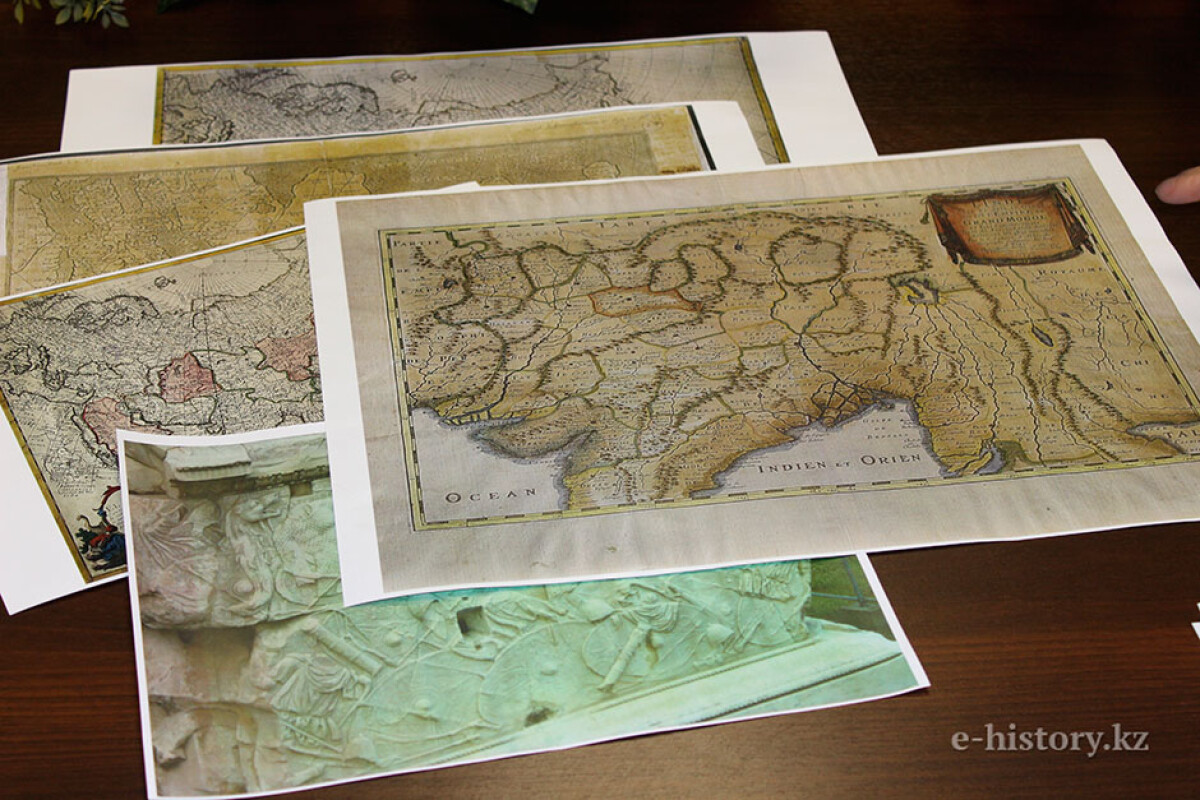 Rafis Abazov, the professor at Columbia University, in an exclusive interview for our portal spoke about the historical value and unprecedented of maps found in the Vatican.

«The project was conceived last year. The preparatory process was almost ten months. We were interested in the relationship especially Western and Eastern civilizations. Specifying, we wanted to see what art images were used in the West in the description of Eastern society, especially in Kazakhstan. As well as we interested in features of perception of the Roman Empire and the states that existed in Italy until the 19th century, the ancestors of the Kazakhs and the peoples who inhabited the present territory of the republic. 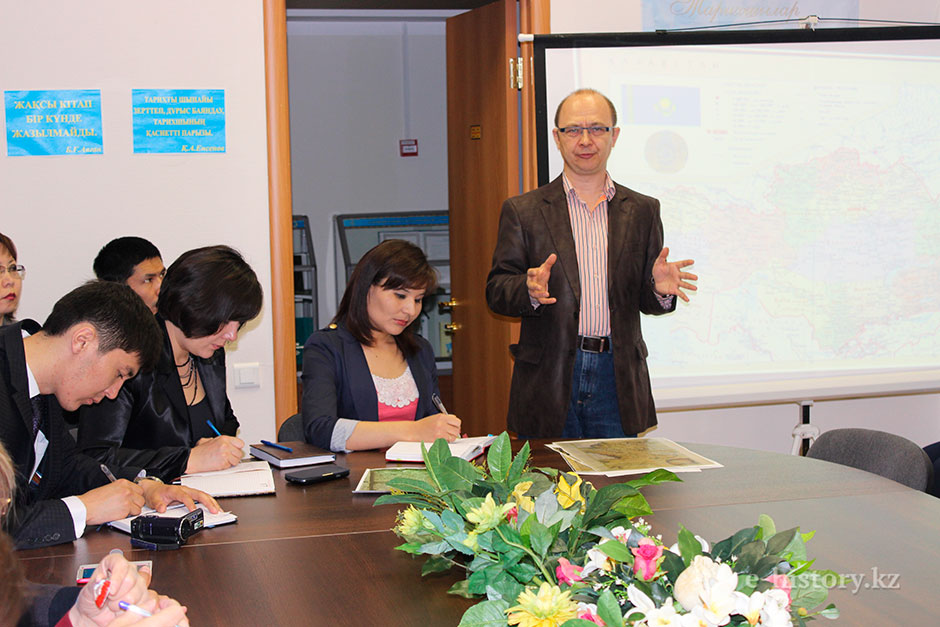 In the realization of the project I had big help of the former rector of the Academy of Arts named after T. Zhurgenova Arystanbek Muhameduly and vice- rector for research Andrei Hazbulatov. We decided do not speak abstractly about the Western civilization, especially about Rome and the Vatican. We were fortunate that in our team there was a native of Italy, the President of the Association of Dante Alighieri»- says the professor.

«The film «The Da Vinci Code» is not a fiction, — said jokingly Rafis Abazov. — Indeed, it is incredibly difficult to communicate and establish contacts in Rome. For six months we have been waited for the response and resolution of the Vatican. Finally, in April this year, after passing a series of interviews with the director of the archives, we have access to the materials.

The historical value of the findings

«Firstly, now has been carrying out an assessment of the maps. If it will be confirmed that it is a completely new maps for historians of Kazakhstan, then we introduce a new scientific revolution historical document that would bring to the study of the history of Kazakhstan new facts. Up until now, the history of the Kazakhs is being studied by Persian, Chinese and Russian sources. These maps are the evidence from Western Europe, which allow a balanced understanding of the history of Kazakh statehood. 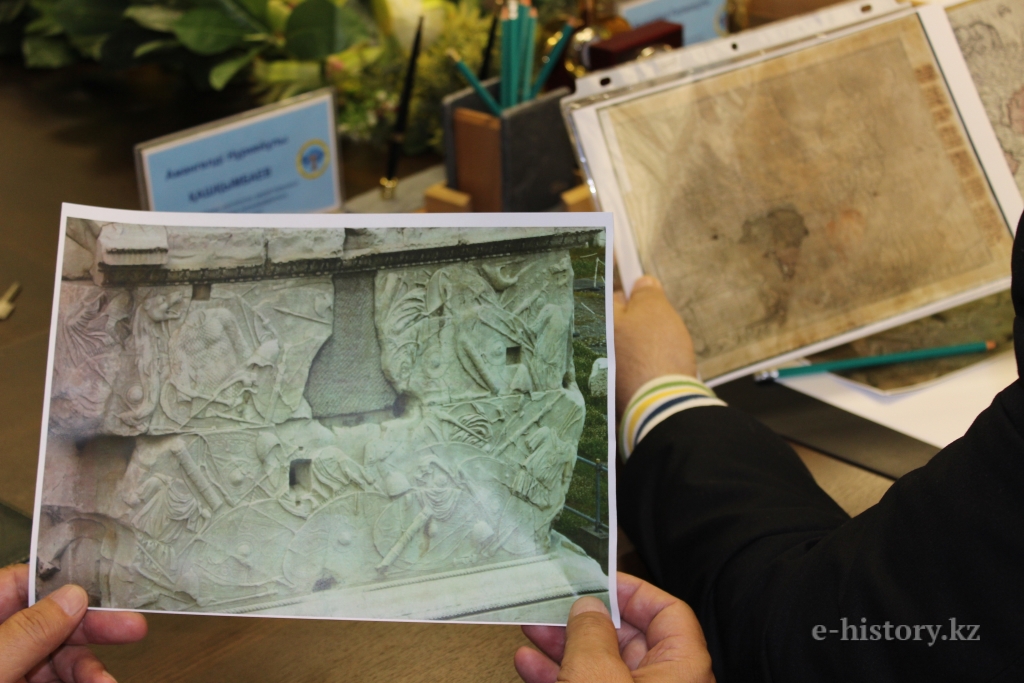 Secondly, thanks to maps, we can learn toponyms, i.e. the names of the settlements, towns, caravans, stats that also allows you to make new touches to the study of the history of Kazakhstan.

Thirdly, we have an opportunity for a fresh look at the early Kazakh statehood. When people talk about relations of the Kazakhs with Western civilization usually mention only two names: Marco Polo and Giovanni Plano Carpini. However, now, thanks to the work in the libraries and archives of the Vatican, we found another twelve names of immigrants from Genoa, Rome and the Vatican, who traveled through Central Asia and in particular through the Chuy valley»- sums up the importance of the found maps the researcher.

We have a hypothesis

«Everyone knows that Western travelers and explorers visited the territory, which became part of modern Kazakhstan. However, it was an external view of the history and culture of the peoples who inhabited the area — says Professor Abazov.
We know only one name of the Kazakh, who made huge contribution to the science of West about understanding of culture and historical features of Kazakh people, it was Shokan Valikhanov. In this regard, we believe that much earlier than Valikhanov, around 16th -17th centuries, maybe in the 18th century, the Kazakhs ancestor or a representative of the peoples inhabiting Kazakhstan, appeared in the West and influenced on the education of Western minds about Eastern civilization that is so enlightening East West about the culture, geography and its development».

«Only one of founded maps has a date, it reflects the geography of Central Asia in 5th-6th centuries. However, we think that on top of the map in the 15th -16th centuries, possibly later, were plotted a new geographical toponyms. The antiquity of this map is supported by the fact that historians for many centuries did not know that the Caspian and the Aral Sea is not a single entity, whereas on the map they were plotted as one sea. Also maps contain Turkic toponyms spread far beyond the modern Kazakhstan. Most likely, on the basis of this map was formed historical mission of Rome and the Vatican in Central Eurasia, and possibly further. However, it is only a hypothesis which requires in-depth study and understanding. 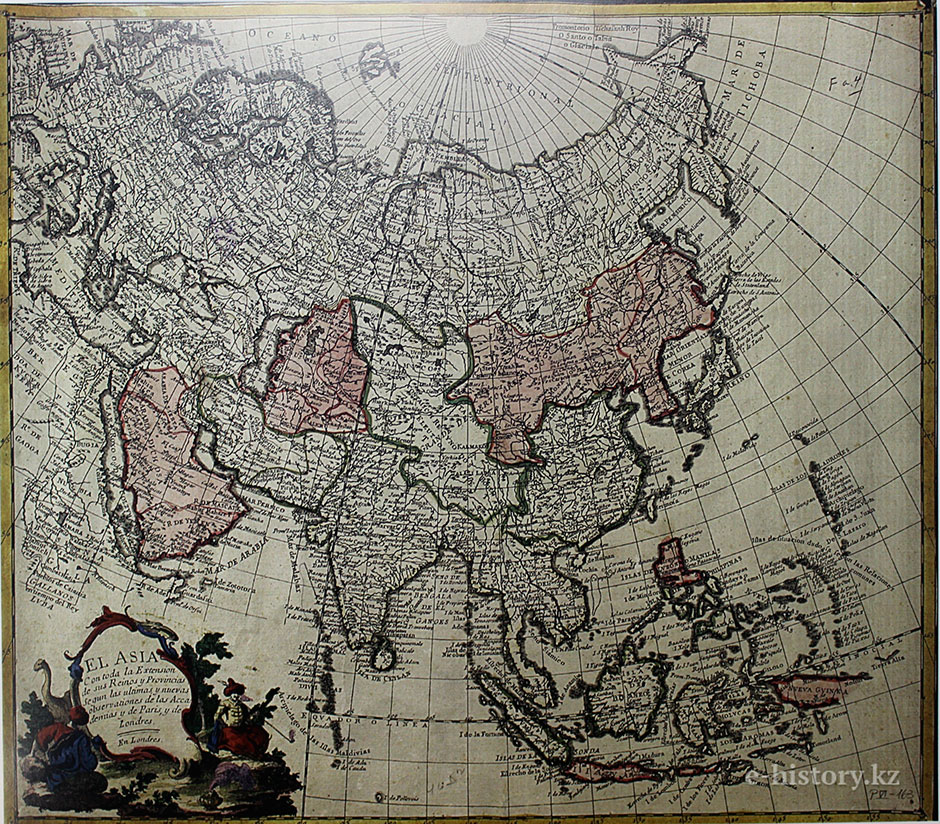 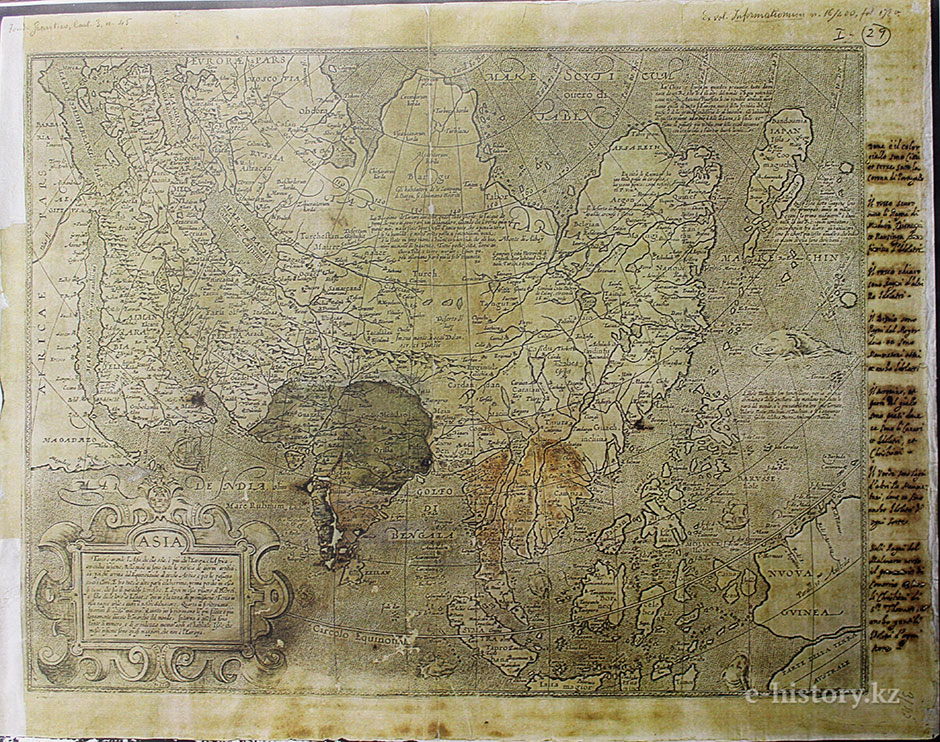 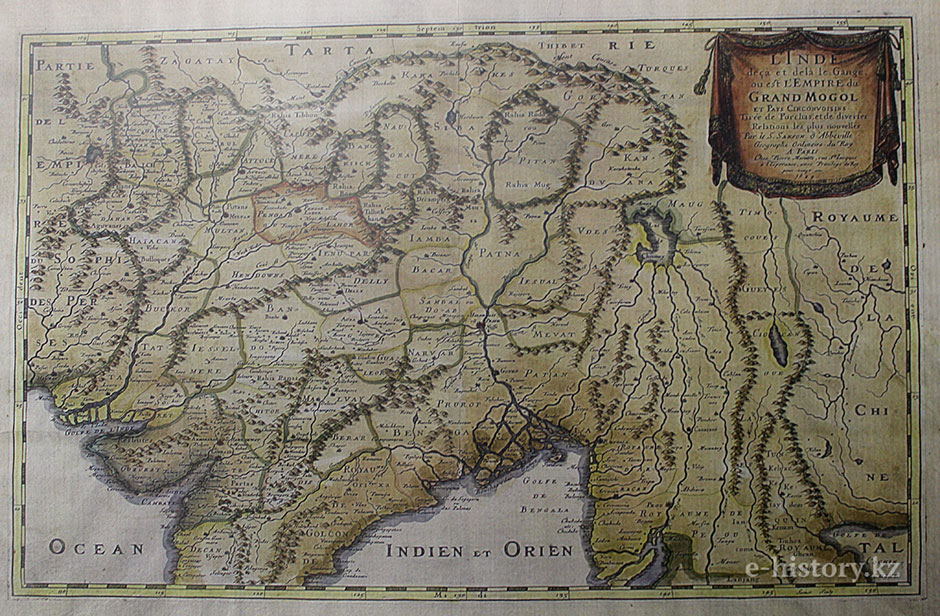 The second map is valuable as it shows a much larger number of settlements and cities in the ancient Kazakhstan, rather than assumed. This map is dated 1654 year. In general maps represent well-established strong ties with the Kazakh tribes of South Asia.

Third map stores information about the time of its creation. It was prepared by the French Academy of Sciences in the 18th century. However, what is shown on it refers to a much earlier period of political history of Central Asia and Kazakhstan.
Also in the Vatican, I took a photo of the unique ancient bas-relief. A wolf was shown on it. This symbol can be found in many of the Turkic peoples. It may come along with the Huns. I wonder how Western culture has reflected East. In the West, there is a romanticizing of the Huns. That is when Attila approached the gates of Rome he turned and walked away, even though he had all opportunities to destroy the city. Visigoths burned it and put an end to the Roman civilization», — says the professor. 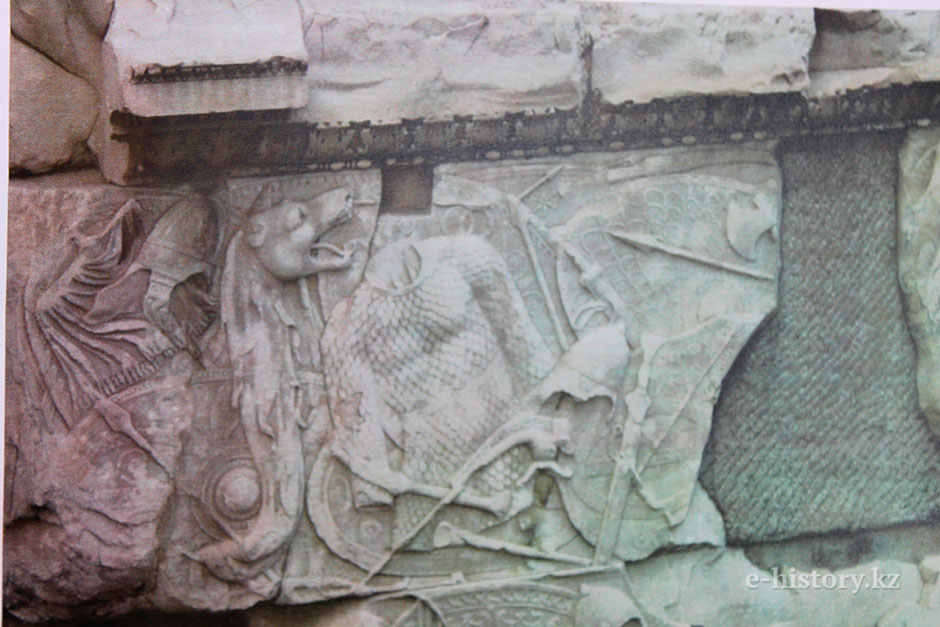 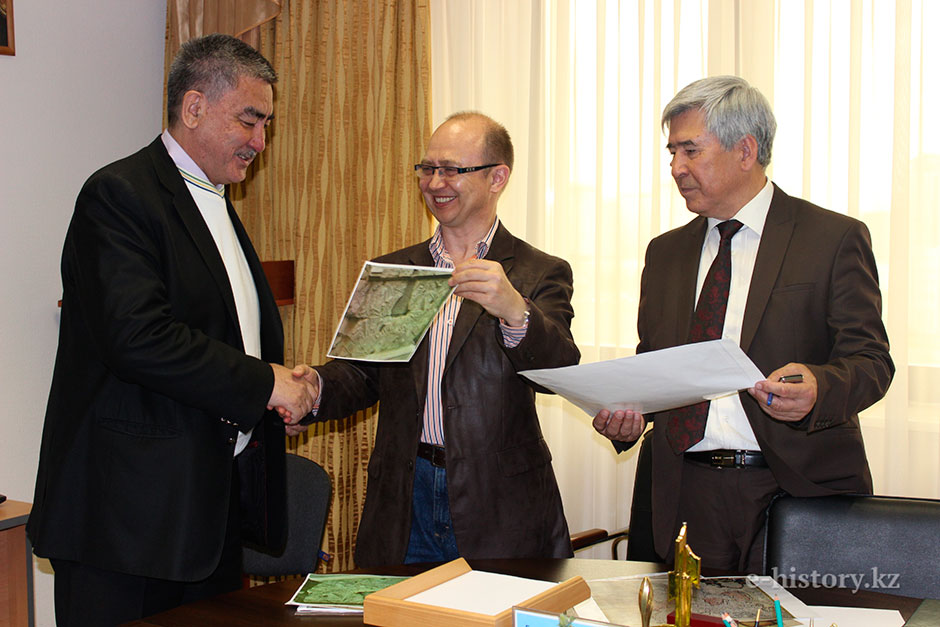 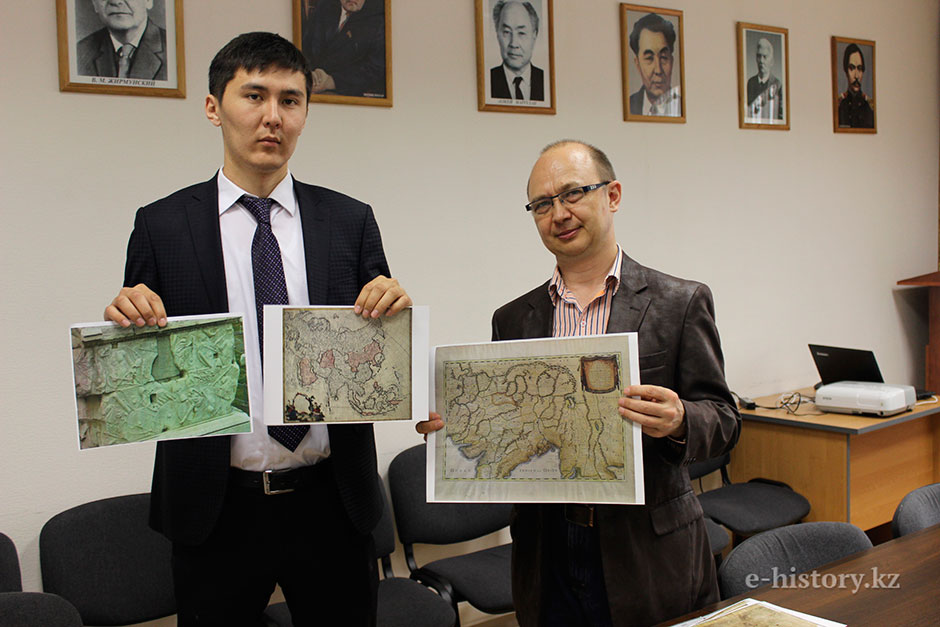 The opinion of the expert

B. Ayagan, the director of the University of the History of the State: «The Vatican for us is terra incognita, the closed territory. Rafis Abazov managed to enter to the chronicle of the Vatican and sought medieval maps, which of represent a great scientific interest. They directly relate to Kazakhstan and Central Asia as a whole. Certainly, there is a need of further careful examination».