Home News “The works of Al-Farabi are important for people”- G. Mutanov the Rector of the Kazakh National University named after Al-Farabi

“The works of Al-Farabi are important for people”- G. Mutanov the Rector of the Kazakh National University named after Al-Farabi 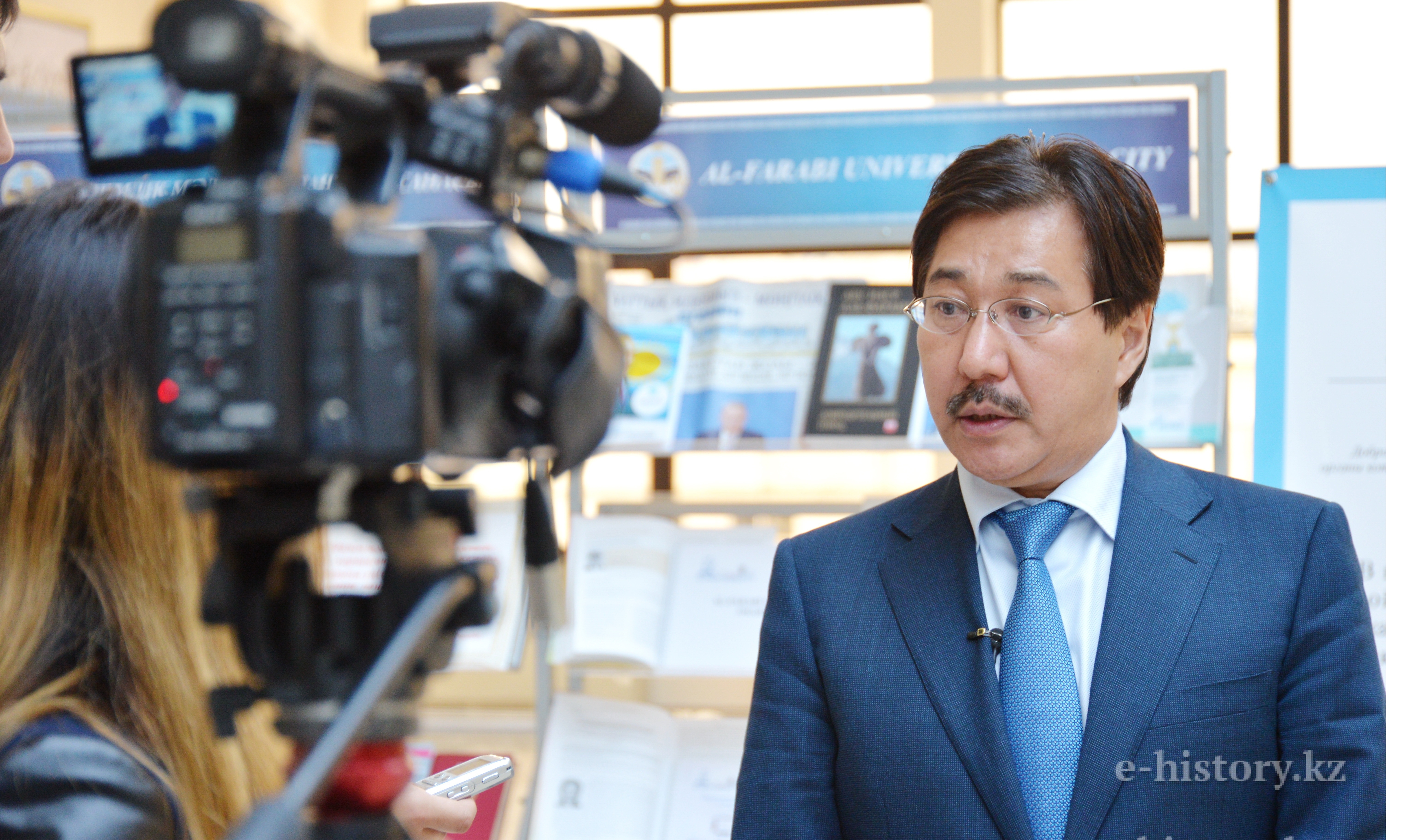 Galym Mutanovich, what kinds of conditions create the people from Farabi at Kazakh National University named after Al-Farabi?

First, since our University named after Al-Farabi, we have to inform people about the heritage of scientist. Thus, from this year we put to print the treatises of Al-Farabi in Kazakh and Russian languages. We have to introduce young generation with his heritage. The students of Kazakh National University have to learn from us. There is a project of 100 books, which include the scientist's treatises that student should know about them. First, we released the book "Kaiyrymdy kala". An example of this work, we have developed a sample of future development called "Al-Farabi university smart city". While reading the book "Kaiyrymdy kala", it can be understood that this work is the model of spiritual development. Now coordinating the scientific and technical prosperity and spiritual development, we prepare our university to the new world stage.

Al-Farabi center along with the releasing the books, started its research work. Today's forum called the library of Al-Farabi.  “Our library is the biggest library after the one in the East Otyrar. The library's reserve has 2, 5 millions of copies. It is the largest collection of books in Central Asia” - said Olzhas Omarovich at today's event.

Despite that Al-Farabi was the national scientist, there was no museum dedicated to him in Almaty except the one that appeared from the artifacts that were dig out in Otyrar. In Almaty in the cultural capital of our country there is no other museum. Thus, in our university was opened the museum dedicate to him. The name Al-Farabi has to be the global brand, which will show the history and life of Kazakhs. 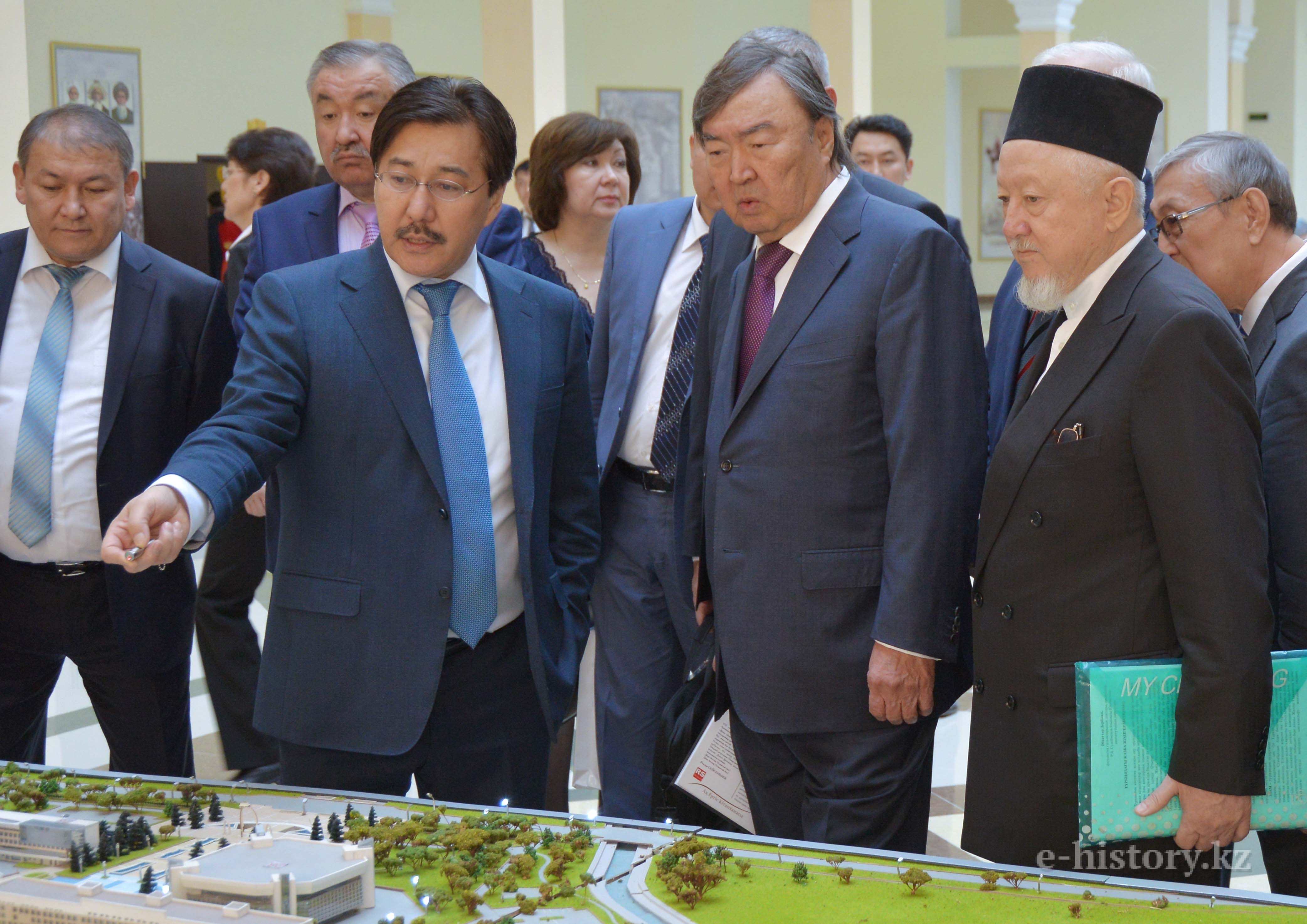 You have opened the museum of Al-Farabi, so during the collection of artifacts with what kinds of organizations of CIS and abroad, also within the country you managed to establish the connection?

As part of the President's program "People in the steam of history" few of our professors visited Middle East. The famous scientist and Arabist in our country is Professor Absattar kazhy Derbisali. He brought about 13 books recently from Arabic countries and Turkey. Not so long ago we have visited Jordan. In Amman at the University of Jordan we have established the educational and cultural research center named after Al-Farabi.  This center helped to Middle East and Arabic countries to start the research and collection of Al-Farabi's heritage. Also with the help of the center we have connected the relationship with Arabic countries on the scientific way. We are planning to publish the books and works that we brought in one single collection.

Please, tell us about relevance of Al-Farabi's works today?

Al-Farabi had many works. As a scientist he explored many areas such as science, philosophy and political science. He once made a classification of scientist, created the works on the research areas. All of these work we collect and release. His works are necessary to our nation. By learning Al-Farabi's work we lift our nation to the international and global level. The fact that we host the 1st International Forum dedicated to 80th anniversary of our university is the evidence for that. Now every year due to Al-Farabi we will host this forum and unite all scientist of the world.  Our plan is to make our country well known in the world.

Thank you for the interview!

Use of materials for publication, commercial use, or distribution requires written or oral permission from the Board of Editors or the author. Hyperlink to Qazaqstan tarihy portal is necessary. All rights reserved by the Law RK “On author’s rights and related rights”. To request authorization email to mail@e-history.kz or call to (7172) 79 82 06 (ext.111)
Қазақша Русский English
MOST READ
Week Month Year
Raymbek batyr is a determined defender of Qazaq interests Ayteke bi is a law expert of the Great Steppe Qazaq poet Kuandyk Shangitbaev: is he equal to Alexander Pushkin? History in Symbols Love and Marriage Story of Sabit and Maryam Gabit Musrepov is a man, who was born under a lucky star Kanysh Satpayev’s faithful Muse History of Wusun State and Yuezhi tribe Images of Women in the Works of Qazaq Poets-Zhyrau Nurgissa Tlendiyev. Principal Conductor of Kazakhstan President of Kazakhstan took part in the opening ceremony of celebrations dedicated to the 175th anniversary of Abai Kunanbayuly THE GREAT SON OF THE GREAT STEPPE

Materials on theme
A film about the Kazakh Khanate will be produced in 2015
The Leader of the Nation: the Phenomenon of Nursultan Nazarbayev
Kazakhstan takes over Victory relay race
Notes of London guest