Human remains were found in Atyrau by oil workers 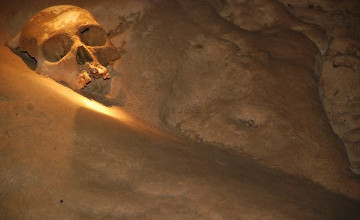 Shocking findings were discovered by oil workers in Atyrau region. According to КТК channel, in the desert area they came across with a cluster of human remains.

As it turned out, the remains belong to the inhabitants of tribes who lived in this region 2-3 thousand years ago. For the first time human bones were discovered during the geological development of sand hills. In 2009 professional archaeologists have worked here. On the ancient burial ground were found burials of five people. At that time the area was fenced, however, nothing left from it today, as assure scientists.

"These are the remains of ancient tombs. They appeared on surface due to wind blows. This place considered as an archaeological monument. However, in order to continue investigations require large costs"- said Mukhambetkali Kipiev, the member of inspection group on protection of historical and cultural heritage of Atyrau region.

Use of materials for publication, commercial use, or distribution requires written or oral permission from the Board of Editors or the author. Hyperlink to Qazaqstan tarihy portal is necessary. All rights reserved by the Law RK “On author’s rights and related rights”. To request authorization email to mail@e-history.kz or call to 8 (7172) 57 60 13 (in - 1163)
Қазақша Русский English
MOST READ
Month Year
Recorded history of Kazakhstan. Part 2
Heroic mothers of the great steppe
How had the World War II been started?
Philosophy of the Emblem
14 monuments at Tekturmas
The rural akims: the country's hope is in the elections
Kazakh historical drama Tomiris premiered in Istanbul
Stolypin about the worries and hopes of immigrants to the Kazakh steppes
ALASH IDEA IS THE PROTECTION OF KAZAKH STATEHOOD
A tireless explorer of the Kazakh land
SWITCHING TO THE LATIN ALPHABET – UNITE ALL KAZAKH PEOPLE
Kunaev Dinmukhamed Akhmedovich
People who eat horses will kill you
Materials on theme
100 unique sites: The mausoleum of Arystanbab
"The current problems of history and social sciences and humanities"
Great General of the Great Rifle Division
History through the eyes of tourist: Altay’s culture – priceless heritage