Feel yourself a nomad 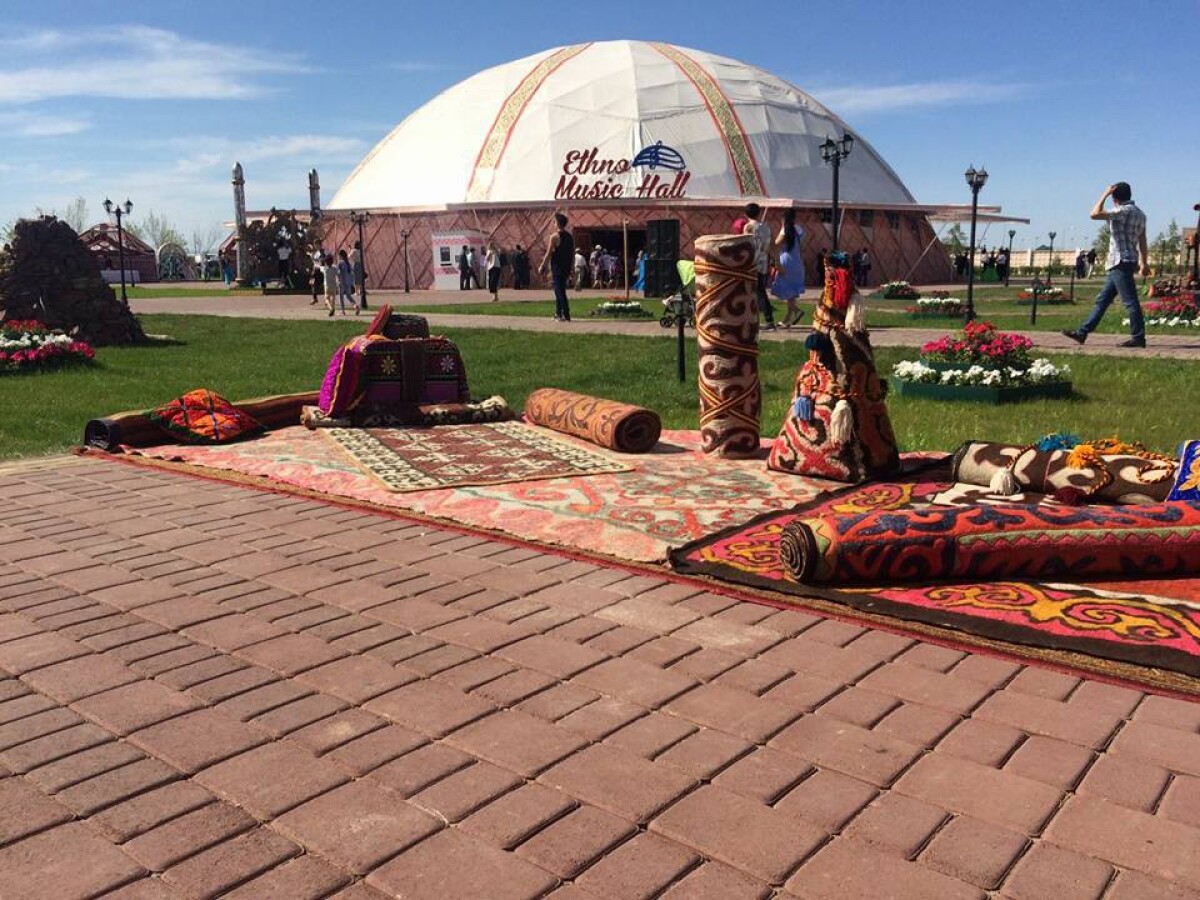 In order to send the visitors of EXPO-2017 on a journey to the history of our ancestors, so that everyone feels like a nomad, an improvised ethno-aul was opened

Thanks to the beautiful ethno-complex created by the Ministry of Culture and Sports on behalf of the Government, the guests of the exhibition are immersed in the life of the nomadic people. It presents customs and traditions that are sacredly hand down from generation to generation.

During the period of the international exhibition, each region within the framework of the Days of Culture will need to present its best creative teams, applied and craft art. 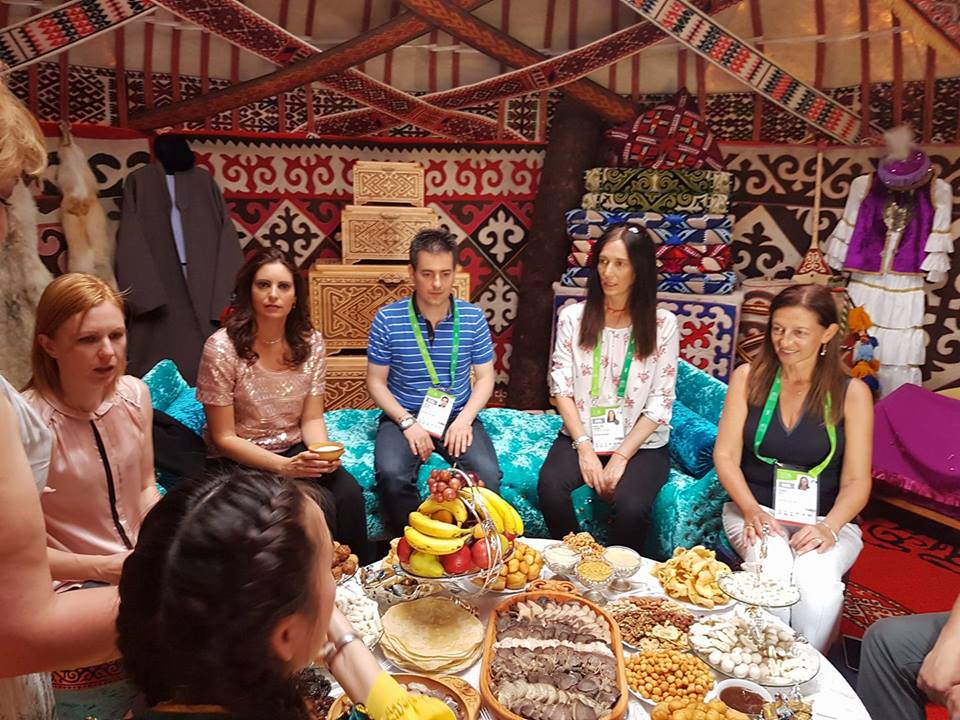 In addition to the guests who came from abroad, participants of the international Qurultay of Kazakhs visited the ethno-aul in the Days of Akmola region, which took place from June 20 to June 25, 2017. 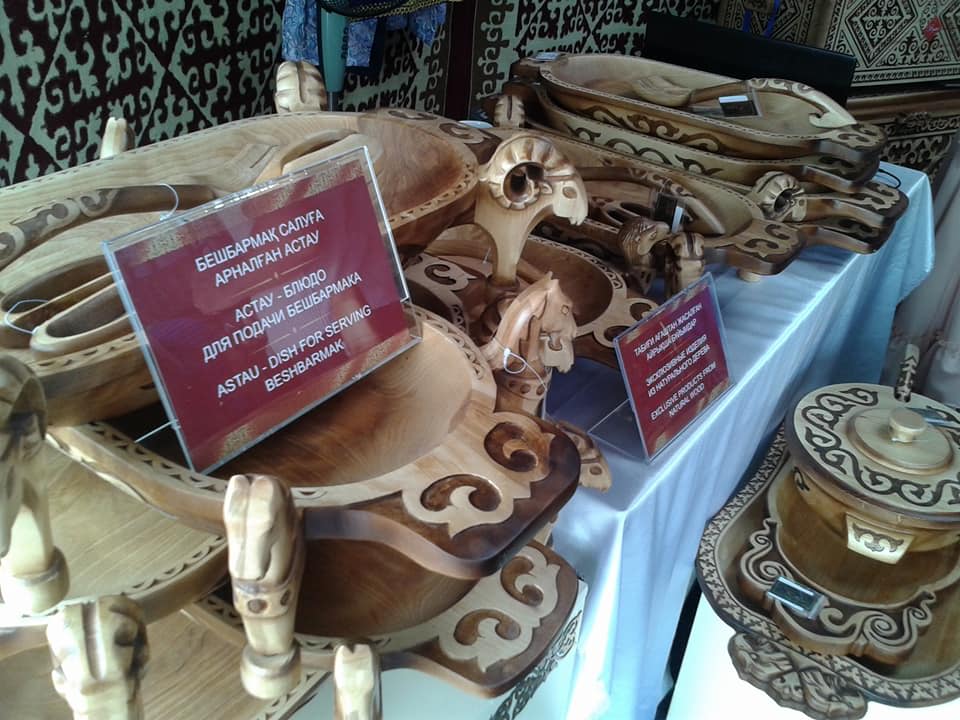 According to Saule Burbayeva, head of the Akmola region Culture Department, Kazakh songs, kyuis and terme are heard on the territory of the ethno-aul. All this is organized in order to familiarize foreign tourists and visitors of EXPO with not only the technologies of the future, but also with the original culture of the Kazakh people.

At the entrance of the improvised khan's horde, the guests are greeted by creative groups and artists from the Akmola region. Azheler (grandmothers) in white zhaulyks (kerchiefs) greeted the visitors with the rite of "Shashu”. Kazakhs believe that the sweets chosen during “Shashu” bring good luck. 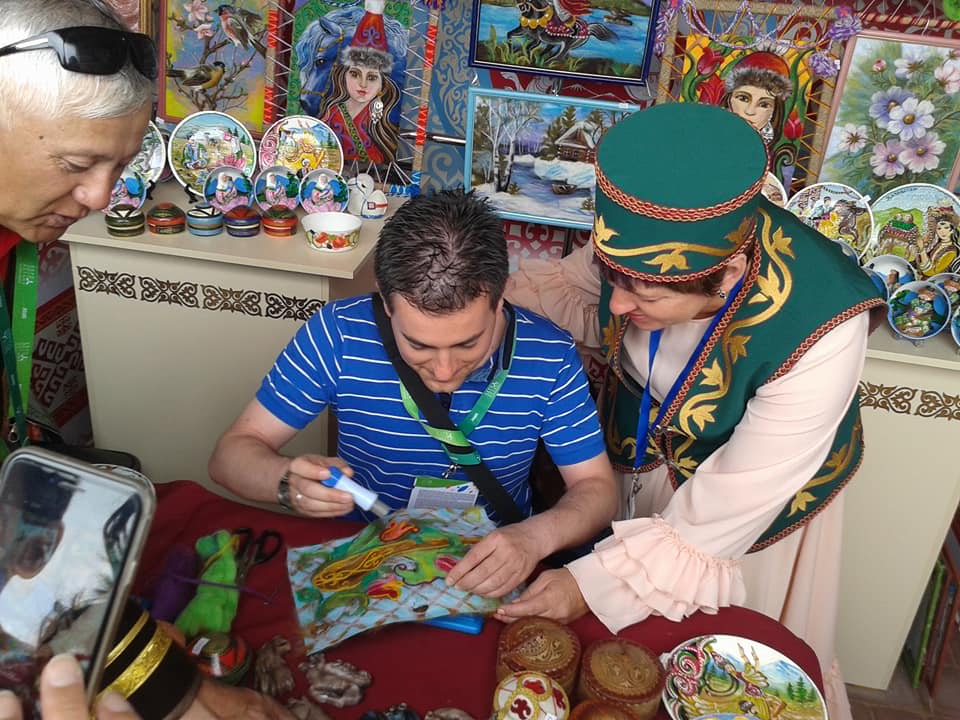 Italians interested in the process of making felt encrustation

The guests were very interested in the work of craftsmen, especially bone carving. On the sheep's shoulder blade are created real works of art: from the statue of the "Golden Man" to the constituent of arms of the Republic. And from household: from combs to women's jewelry. Also of special interest were products made of wood. Also there were exhibited the Astau - a dish for meat, ozhau - scoop and other household utensils, kamshy (lash), musical instruments. 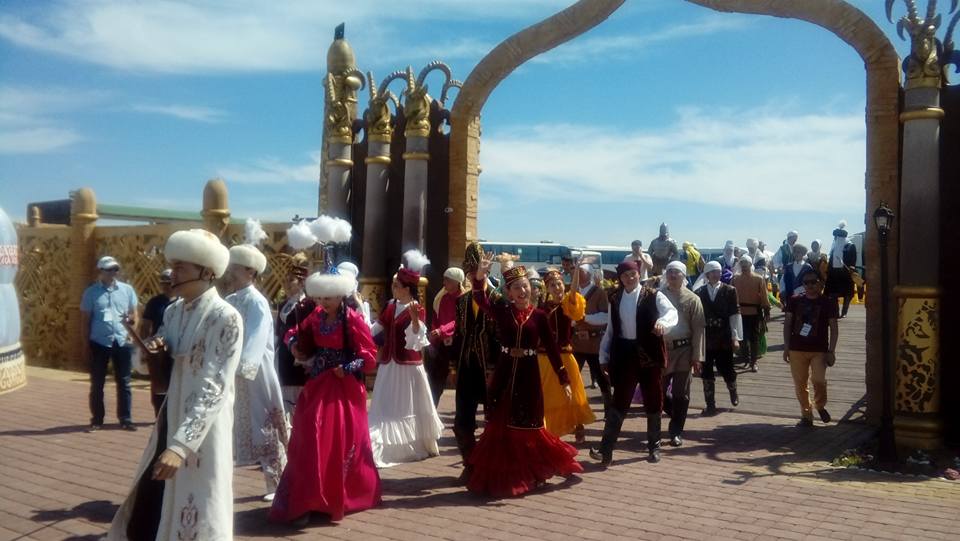 Guests from Hungary bought a woman's jewelry - a silver, three-hundred-gram necklace for mothers who breastfeed their babies for the addition of milk. It consists of six pendants, each of which is embedded in natural stone - amethyst. The cost is 350 thousand tenge. 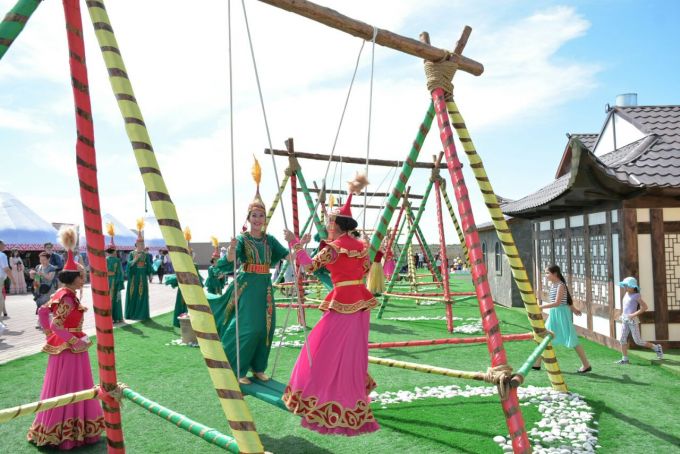 Akmola actors were able to revive people's favorites - Akan Seri, Birzhan Sal, Ukili Ybyrai. Their songs were performed to the sounds of dombra and kobyz. 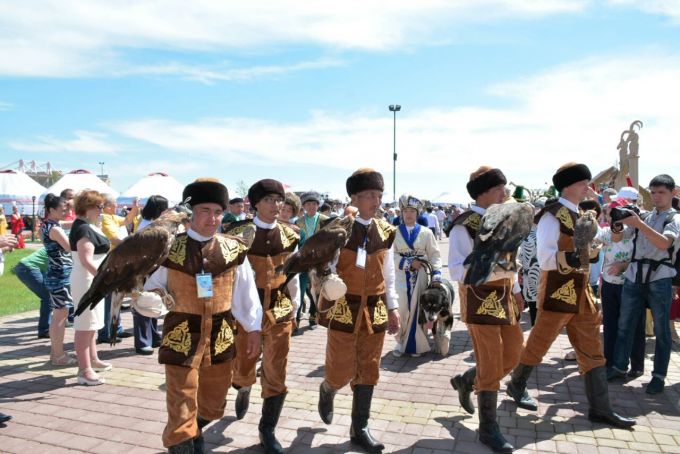 On the wrestling mats were held fights of paluans (wrestlers). Guests were represented by golden eagles, hounds tazy and wolfhounds. Children played asykatu and togyz kumalak. 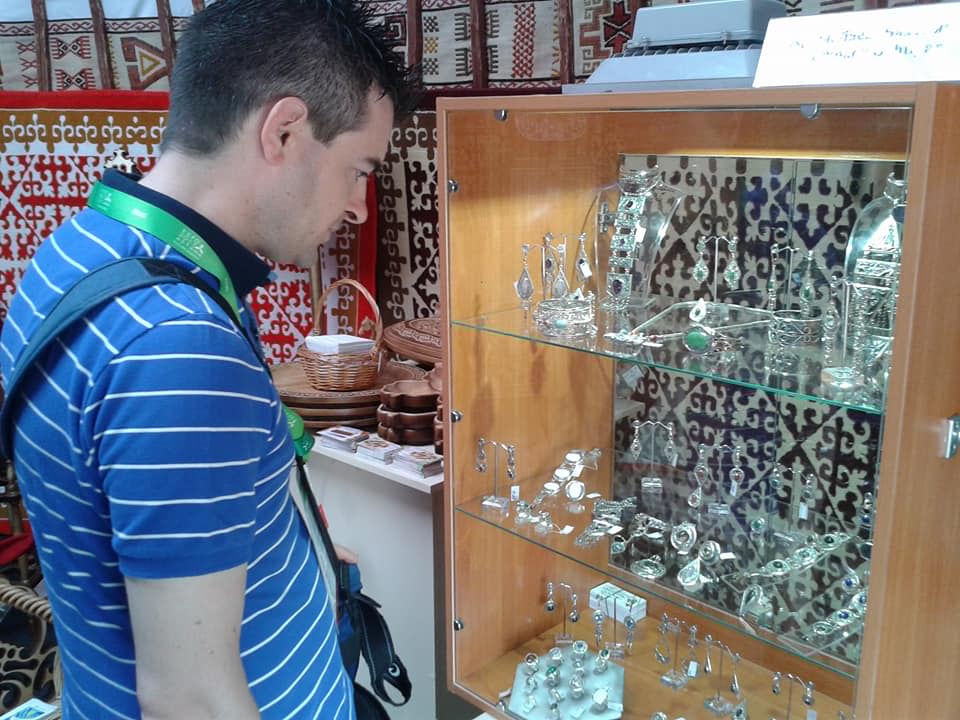 As noted the delegate of the Union of Writers, the Honored Worker of Culture of the RK, the honorable citizen of Tarbagatay district of East Kazakhstan region, akyn Almas Satpayev who returned from China to his historical homeland 25 years ago, there is the largest Kazakh Diaspora - 2 million people. 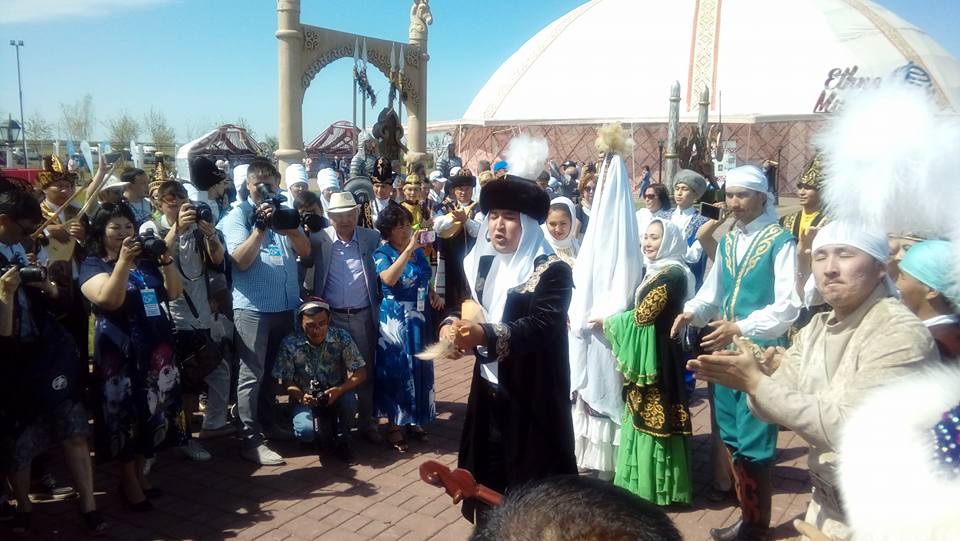 "The Kazakhs who live in the PRC study the history of Kazakhstan with love, they are proud of the names of the geniuses of the poetic and song art of Akan Seri, Birzhan Sal, Ukili Ybyrai, honor the leaders and activists of the Alash movement," said Satpayev. 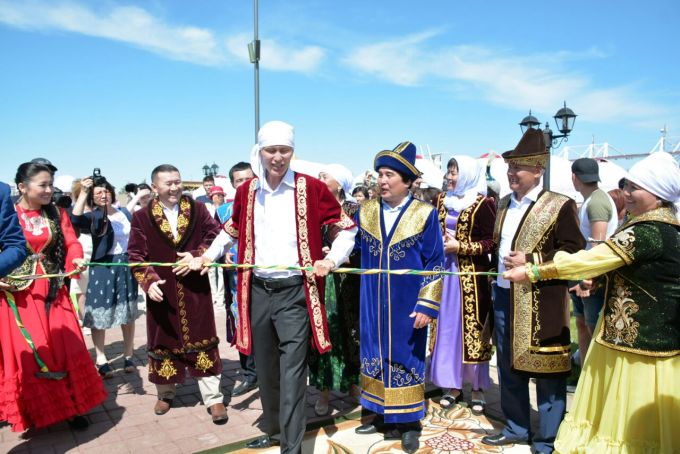 These days the residents of Akmola with all the hospitality of the Kazakh people met various delegations, including Italian and Chinese. They were surprised by the rich culture. And they tried the process of making felt encrustation. 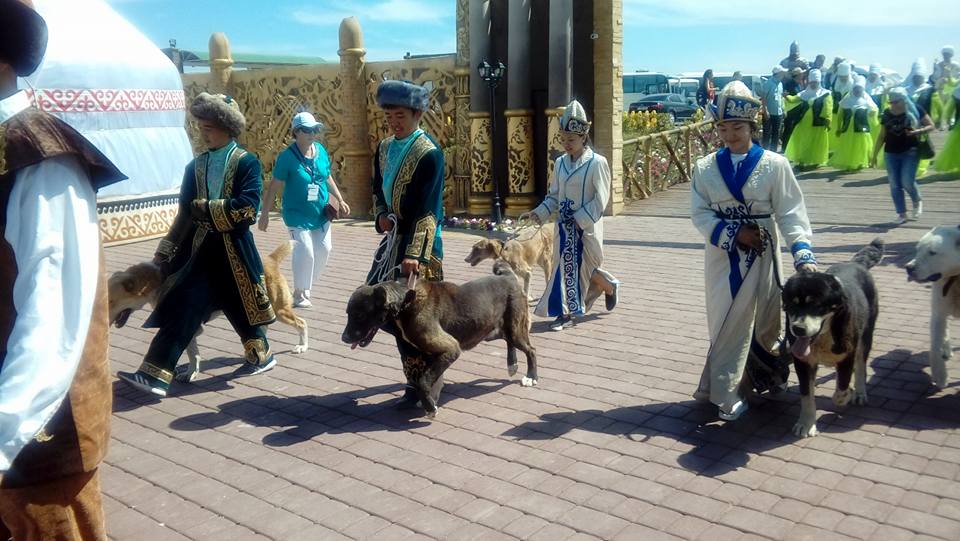 We recall that, it is here in Kazakhstan, many countries of the world demonstrate their scientific achievements in the field of saving energy resources.