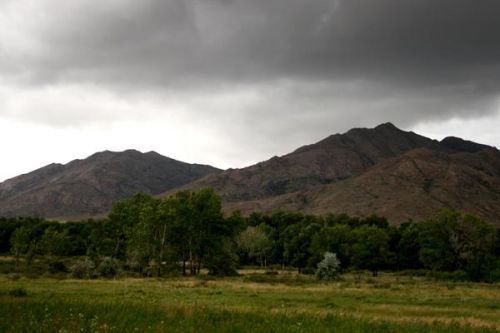 The region of Ulytau (Great Mountains) to the north of Zhezkazgan occupies a prominent place in the history of the Kazakh nomads. Archaeologists have found numerous remains of human settlements in this region, dating from as early as the Bronze Age.
Due to the abundance of accessible and easily worked copper, from about 1500 ВС this territory was an important centre in the development steppe civilization. In the wider surroundings there are significant | rock carvings from this epoch. The Copper Way, as it is called, part of the early route system that became the Silk Road, began here. Mount Ulytau was also a meeting place of the Kazakh khans for hundreds of years.
Looking at the mountain range, which gradually rises from the steppe, one can easily imagine why this particular spot was selected for important councils and actions. With an abundance of lakes, springs and rivers, the landscape is one large oasis in the steppe. Its appearance and characteristics give it a certain heavenly aura that would have appealed to the tribal leaders. The Turkic word "Ulytau" means "big mountains".
Ulytau is not just the geographical centre of Kazakhstan , but was also of great importance for the ancient Kazakhs as the origin of the Torgay River and the Sarysu Basin. The steppe mountain range stretches over 350 kilometres from west to east and over 210 kilometres from north to south. Its highest peak is Mount Akmeshit, or Ulytau (H-11 ЗЗ).
In this region there are many historic grave mounds, among them those of Alasha Khan and Zoshy (Juchi) Khan, the oldest son of Genghis Khan and an important commander of the Golden Horde. In the second half of the 15th Century, the leaders of the three Kazakh tribal hordes and numerous subordinate tribes came together here for a great kurultay and sealed their unification. The inscriptions of all the tribes' coats of arms (tanba) on the memorial stone of Tanbalytas are a sign that this alliance was meant to last forever. Recognizing the significance of this period, a monument to Kazakh unity was opened at the foot of the mountains.