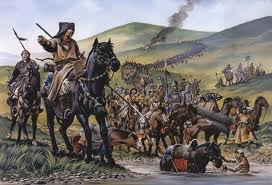 The first information about the Karluks, known under the name of Bulaks, appeared in the 5th century.

The first information about the Karluks, known under the name of Bulaks, appeared in the 5th century. In the ancient Turkic runic monuments the strong alliance of the nomadic tribes, that occupied the territory between the Altai and the eastern coast of Lake Balkhash, was referred to as the "Uch-Karluks" (Three Karluks). In the middle of 7th century the Karluk association consisted of three major tribes – Bulak, Chigil (Sebek) and Tashlyk. The Karluk tribal chiefs had the title Elteber.

In 742, the political hegemony in the steppes of Mongolia transferred to the union of three tribes – the Karluks, Uighurs and Basmyls, after they overran the Eastern Turks. For a short time the Basmyl leader became a supreme Khagan. The leaders of both, the Karluks and the Uighurs, received the title of Yabgu. However, in 744, the Basmyls were defeated by the allied forces of the Uighurs and Karluks. In Central Asia a new state of Uighur Khaganate (744-840) was established. The head of the Uighur tribes became the supreme Khagan, and the Karluk leader assumed the title of a right (western) Yabgu. The intention of the Karluks to be independent led to their migration westward from the Uighur Khaganate.

In the middle of the 8th century there was a fight for the leadership in the Turgesh Khaganate between the Karluk and Oguz tribes, whose major groups settled in the Issyk- Kul and Talas region. As a result of this confrontation a significant part of the Oghuz tribes left Zhetysu and went to the Syr Darya.

In 766, the supremacy in Zhetysu passed to the Karluk Djagbu with two Turgesh residences – Taraz and Suyab. Under the Karluks a feudal state was established. The Karluk continued extending the boundaries. In 766-775 one branch of the Karluks captured Kashgar, and at the end of the 8th century the other group extended its authority to Fergana.

On the territory of Zhetysu was formed the political alliance of the Karluk tribes. According to Arab and Persian sources, the Karluk union in the 9-10th centuries consisted of numerous tribal groups. The Arab geographer al-Marwazi (12th century) mentioned that the Karluk alliance consisted of nine tribes. Turkic nomadic and semi-nomadic tribes of Zhetysu and Southern Kazakhstan entered the Karluk confederation. There were the Tuhsi, Chigils, Azkishes, Turgeshes, Khalajes, Charuks and Barshans. The population subservient, to the Karluks was not, homogeneous. It included the Iranian Sogdians and migrants from the Middle East and Central Asia.

In the 8-10th centuries there was an intensive process of Turkification of the settled agricultural population in the Karluk state.

In the 8-10th centuries the Karluk tribes settled in the vast territory of Kazakhstan from the Dzhungarian Alatau to the middle reaches of the Syr Darya, between Lake Balkhash and Issyk -Kul, in the valleys of the Ili, Chu and Talas rivers, in the spurs of the Tien Shan mountains and in the area of Isfijab up to the medieval town of Otrar. According to the Arab geographer Ibn Hawqal (10th c.), "30 days of travel required to cross the Karluk land from west to east."

Hostilities in the east in the late 8th - early 9th centuries between the Karluks and the Uighurs ended with the Karluk defeat and the recognition of the supreme power of the Uighur Khagan in Mongolia. In the west, the Karluks waged war against the Arab conquerors of Transoxiana and actively supported various anti-Arab actions in the early 9th century. In 810, the Arabs in an offensive action against the Karluks reached the city of Kulan. In 812, they organized a campaign in Otrar, where they defeated the Karluks, forcing their Gjabgu to flee into the Kimek state. From the 20’s of the 9th century in Transoxiana the Samani dynasty came to power, which was in nominal dependence on the Arabian Caliph in Baghdad.

In 840, in the Central Asian steppes an important event occurred. The Yenisei Kyrgyz invasion destroyed the Uighur Khaganate, forcing the Uighurs to flee to Turfan oasis and to Guangzhou. The Karluk Djabgu and the ruler of Isfijab, Bilge Kul Qadeer-Khan, took advantage of the situation and proclaimed himself as a sovereign ruler and assumed a new title of Khagan. In the same year, the Karluk Khagan had to wage war against the Samanids. The governor of Samarkand declared a holy war against the Turks and captured Isfijab. In the 893 Ismail ibn Ahmed organized a campaign in Taraz. The Karluk Khagan Ogulchak Qadeer Khan withstood a long siege, but the city fell, and the population was converted to Islam. Ogulchak moved his residences from Taraz to Kashgar and continued military actions against the Samanids. However, the Turks of Semirechye not only held the line against the Samanids, but even organized campaigns in their state. In 904 a large Turkish army invaded Transoxiana, but soon was forced to leave.

Arab domination affected the Karluk Khanate, which included only part of South Kazakhstan. The cities of Farab, Isfijab and Taraz, despite the political struggle, remained, according to early medieval Arab sources, the most rebellious Arab possessions. The Arab conquests had an impact on the socio-economic, political and cultural life of the subservient territories, on ethnic and linguistic processes in them.

The political system of the Karluks was represented by the regional tribal system, which weakened a centralized form of government. The power of the Karluk Djabgu was nominal. The regional rulers, which headed the major tribes, wanted to consolidate their de facto independent possessions. Tribal aristocracy was given the privileges that were hereditary. Military and administrative system in the Karluk state represented their nomadic and semi-nomadic way of life.

There was the social and class inequality in the Karluk society. Along with the rich aristocracy there were paupers and slaves, deprived of civil rights. However, the population mostly consisted of commoners, who often fell into a non-economic dependence on the wealthy patrons. Not only strict hierarchical system existed. The clans and tribes of the Karluk confederation were separated by their social importance.

The ruling nobility of nomadic tribes not only owned the pasture lands, but also the urban centers. According to the "Hudud al-‘Alam" in the Karluk state there were 25 towns and cities, among them: Taraz, Kulan, Merki, Atlalig, Tuzun, Baliga, Barshan, Sikul, Talgar, Tong, Penchul and others. The capital of the Karluk state and many cities were located on the Silk Road, which was important for the population of southern Kazakhstan and Zhetysu, not only as a diplomatic and trade route, but also as a way of cultural and religious contacts.

However, the Karluk state did not have strong economic ties. There was internecine strife for power and for pastures in it. In these circumstances, the real threat to the Karluk state came from Kashgar. In 940 they took Balasagun, and the Karluk state fell.
Use of materials for publication, commercial use, or distribution requires written or oral permission from the Board of Editors or the author. Hyperlink to Qazaqstan tarihy portal is necessary. All rights reserved by the Law RK “On author’s rights and related rights”. To request authorization email to mail@e-history.kz or call to 8 (7172) 57 60 13 (in - 1163)
Қазақша Русский English
MOST READ
Month Year
Burial mounds of the southwestern part of the Semirechye region
Union of the Archives and Library
The referendum on the Constitution is a significant stage of democratization
Heroic mothers of the great steppe
Philosophy of the Emblem
14 monuments at Tekturmas
The rural akims: the country's hope is in the elections
Kazakh historical drama Tomiris premiered in Istanbul
Stolypin about the worries and hopes of immigrants to the Kazakh steppes
ALASH IDEA IS THE PROTECTION OF KAZAKH STATEHOOD
A tireless explorer of the Kazakh land
SWITCHING TO THE LATIN ALPHABET – UNITE ALL KAZAKH PEOPLE
Kunaev Dinmukhamed Akhmedovich
People who eat horses will kill you
Kazakhstan's participation in the Winter Olympics has a long history
Materials on theme
Oghuz Djabgu state (9th - early 11th centuries)
Kazakhstan in the Middle Ages
Turkic Khanate and people
Turkic and Turgesh Khaganates (552 – 756)