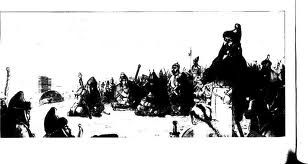 The formation of the Kara-Khitan Khanate was closely intertwined with the Central Asian Khitan tribes.

The formation of the Kara-Khitan Khanate was closely intertwined with the Central Asian Khitan tribes. The Khitans (or Khitai, Kitan, Kidan) were a nomadic Mongolian people, originally from Mongolia and Manchuria from the 4th century. They lived to the north of China, in the territory of Manchuria and Ussuri krai. In 924, the vast territory from the Altai Mountains to the Pacific Ocean was under the rule of the Khitan state, or Liao Dynasty.

In 1125 combined forces of China and Jurchen state ended the Liao Dynasty. Part of the Khitans submitted to the Jurchens, and the other group moved through the lands of the Yenisei Kyrgyz to the Emil River, and there established the Khitan state. Since their authority was asserted over a part of Semirechye, the Khitans became absorbed into the local Turkic population and were called the Kara-Khitans.

In 1128 the ruler of Balasagun from the Kara-Khanid dynasty called the Kara-Khitans to fight against the Kangly and Karluks. Yelu Dashi conquered Balasagun from the Kara-Khanid ruler and founded his own state in Zhetysu. He organized ​​several military campaigns, extending the boundaries of the state from the Yenisei to the Talas. After that the Kara-Khitans conquered the Kangly and annexed East Turkestan. In 1137 in Khujand they defeated Mahmud Khan, the ruler of Transoxiana, and in 1141 at the Battle of Qatwan near Samarkand destroyed the Seljuk and Kara-Khanid army. The Kara-Khitans gained control over Bukhara and the entire central Transoxiana. A special squad, moved towards Khwarezm, forced the Khwarezmshah to pay them an annual tribute of 3000 gold dinars. Semirechye, South Kazakhstan, Transoxiana and East Turkestan were annexed by the Kara-Khitan Khanate. The Kara Khanid dynasty became their vassals.

The head of state held the title of Gurkhan. The capital was Balasagun. In the army there was strict discipline. The country had a system of taxation, when each house had to pay one dinar. Gurkhan did not give land to his entourage as he feared their strengthening and rivalry. Under their direct control was the southern part of Zhetysu, north-eastern region of Isfijab and Kulja. Part of Zhetisu north of the Ili belonged to the Karluk khans. Gurkhan’s representatives always attended in their environment. First Gurkhan died in 1143. In 1208 the Naimans led by Kuchlug fled from Genghis Khan to the Kara-Khitans.

In the 12th century the Naiman confederation, as well as the Khereids and Merkits, was one of the major Central Asian states. The question of the origin and early history of Naimans is very complicated. It is possible that they had a mixed ethnic composition, although the latest information in the scientific literature supports the view of their Turkic speaking. It is believed that the word "Naiman" in Mongolian language means "eight", as the number of tribes that were part of the confederation. The researchers identify the tribal union "Sekiz Oghuz", mentioned in the ancient inscriptions, with the Naimans. In the 8th century the Oghuz tribal union settled in the land from the Orkhon River to the upper Irtysh. Subsequently the Naiman tribes also lived there.

The neighbors of the Naimans in the west were the Kangly and Kipchaks, who lived in the upper reaches of the Irtysh River, in the north – the Yenisei Kyrgyz, in the east – the Khereids lived in Eastern Mongolia, and in the south - the Uighurs, who were the vassals of the Khitans. The Naimans had strong ethno-political and cultural ties with the surrounding nomadic and sedentary agricultural ethnic groups, especially with the Kangly. Several groups of Kangly and Kipchaks settled in the Naiman lands.

Peaceful relations alternated with periods of strife with the strongest and most powerful tribes of the Khereid Ulus. After the collapse of the Khitan Khanate in 1125, in Central Asia several new states (uluses) were established. The leading power transferred to the Khereid khans.

The earliest information about the Khereids was mentioned in written sources, dating from the beginning of the 10th century, and related to the Zubu tribes. The Khereid confederation ethnically consisted of Turkic and Mongol tribes. To the west of the Khereids lived the Naimans, in the north – the Merkits, in the east - the Tatars, and in the south – the Tanguts. The leaders of the Khereid tribes had two residences, the north one in the city of Hatun-balyk on the Orkhon River, and the south one to the north of the Yellow River. The main residence on the Orkhon had a favorable geographical position and was located on an important part of the trade route. It was the place of concentration of merchants and different missionaries from neighboring and distant countries. In 1007 the Khereids and Naimans adopted Nestorian Christianity. It is obvious that the Khereids were under some influence of Uighur culture.

In the second half 12th century the Khereid Ulus under Toghrul Khan covered the territory from the upper reaches of the Selenga River in the north to the Yellow River in the south, from the Khangai Mountains in the west to the Khalkyn-Gol in the east. The Khereids maintained close political and ethno-cultural relations with the Naimans, Kangly, Uighurs, Merkits, Mongols, Kara Khitans and Tanguts. At the court of Toghrul Khan the future rulers and leaders of the steppe tribes were brought up, particularly Temujin (Genghis Khan) and Jamukha.

The Khereid ruler Toghrul Khan recruited the representatives of the Kangly aristocracy. It seems that there was a genetic link between the Khereids and Kangly.

The Khereids and Naimans were at the same level of social and political development. They formed into independent states, or uluses, and each of them had their own territory. Important parts of the ulus borders were protected. Khans had their personal summer and winter pastures.

Khan’s residence (Horde) was of great importance in the Khereid and Naiman states. The Naiman and Khereid states were governed by customary law. In the khanates the paperwork existed. Documents were set with a seal, especially in the collection of taxes and the appointment of officials. Positions among the aristocracy, as usual, were handed down. The adoption of Christianity by the Khereids and Naimans shows a high level of social and cultural development. Social differentiation and consolidation of related tribes led to the formation of early feudal states: the Khereid Ulus and the Naiman Ulus.

In the end of the 12th century the political rise of Temujin occurred. After defeating the Tatars, in 1203 he conquered the Khereids, and in 1206 defeated the Naimans. Defeated Naiman tribes led by Kuchlug moved to the Altai, where they joined the Khereid and Merkit groups.

In 1211 Kuchlug and khans allied with him captured the Gurkhan. After two years, the last Gurkhan Zhilugu died. The Kara Khitan state ceased to exist. Less than a century of existence of the Kara-Khitan Khanate had no appreciable impact on the economy, social life and culture of the region.

Use of materials for publication, commercial use, or distribution requires written or oral permission from the Board of Editors or the author. Hyperlink to Qazaqstan tarihy portal is necessary. All rights reserved by the Law RK “On author’s rights and related rights”. To request authorization email to mail@e-history.kz or call to 8 (7172) 57 60 13 (in - 1163)
Қазақша Русский English
MOST READ
Month Year
The referendum on the Constitution is a significant stage of democratization
Philosophy of the Emblem
The rural akims: the country's hope is in the elections
Kazakh historical drama Tomiris premiered in Istanbul
Stolypin about the worries and hopes of immigrants to the Kazakh steppes
ALASH IDEA IS THE PROTECTION OF KAZAKH STATEHOOD
A tireless explorer of the Kazakh land
SWITCHING TO THE LATIN ALPHABET – UNITE ALL KAZAKH PEOPLE
Kunaev Dinmukhamed Akhmedovich
People who eat horses will kill you
Kazakhstan's participation in the Winter Olympics has a long history
Rebooting a field of science and education
Recorded history of Kazakhstan. Part 1
Materials on theme
Turkic and Turgesh Khaganates (552 – 756)
Questions of systematization of medieval written sources on the history of Kazakhstan and Central Asia
Kazakhstan in the Middle Ages
Karluk Yabgu State (756-940)