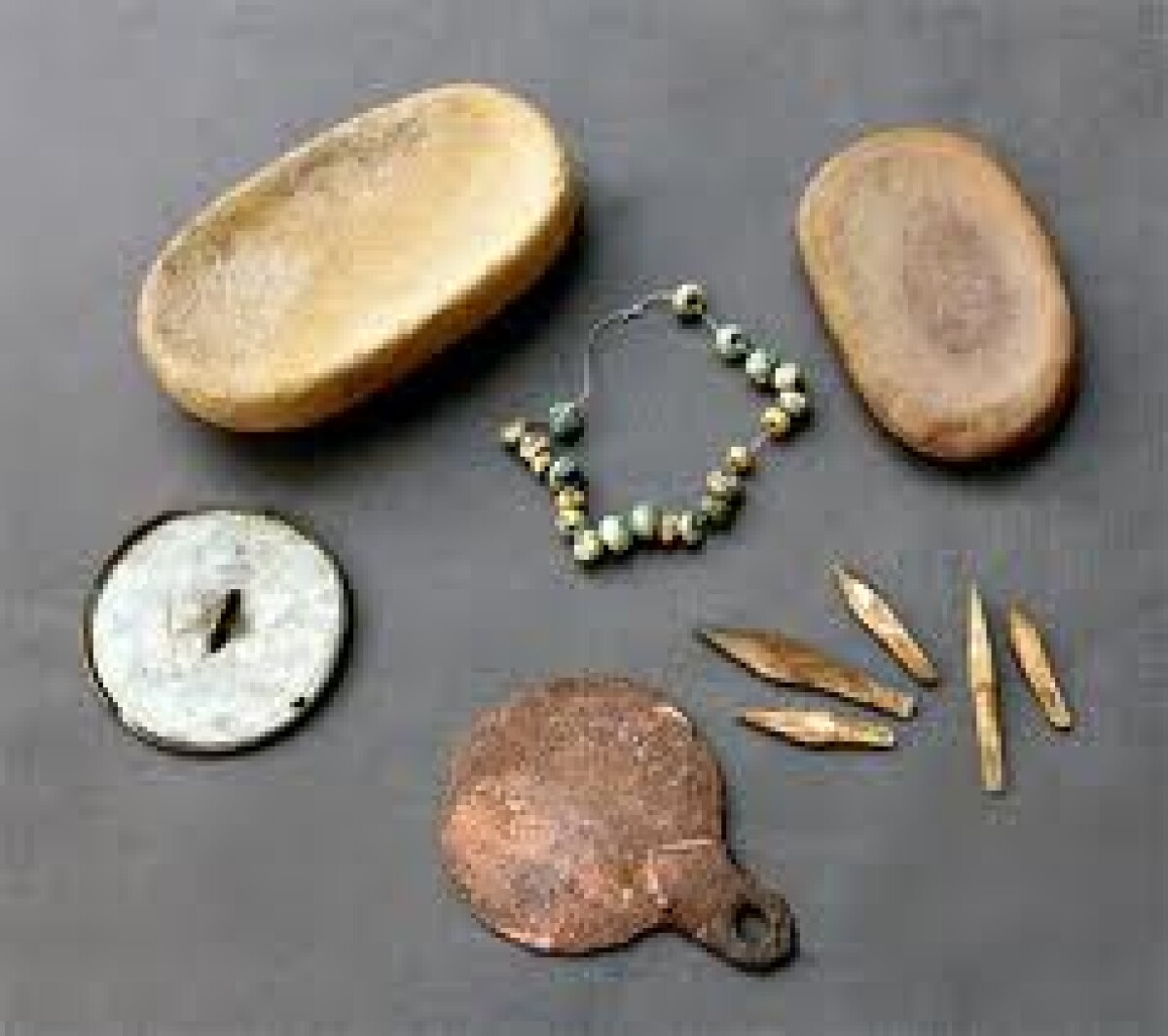 Progress of society during the Bronze Age is determined by two factors. One of them, determining a new age, was manufacturing developing of paleometals.

Contemporary Northern Kazakhstan is divided into two parts: the southern steppe and the northern forest-steppe. The forest-steppe zone, or Priishim province, covers North-Kazakhstan region and the northern part of the Kokchetav region. In Priishim province there are two districts which are Petropavlovsk district and Sergeyevsk district [1, pp. 80, 81]. Tselinograd region, as well as large parts of Kokchetav and Kustanay regions from the standpoint of modern physical and geographical regionalization are steppe landscape temperate zone. This area was consolidated by specialists in Geography into North-Kazakhstan-small-hill province, which is subdivided into two districts: Ubagan-Ishim and Chaglinsk. The peculiarity of the Northern Kazakhstan lies in its geographical location at the junction of two natural zones of steppe and forest-steppe and the consequent neighborhood of various types of economic and cultural antiquity.

In the II millennium B.C. economic changes, emerging in the Neolithic period, resulted in formation of stock-raising and agricultural economy and a highly developed industry. Transition to an economy of producing type radically changed the whole situation on the territory of Kazakhstan.

Progress of Bronze Age society was based on two factors. One of them, which defined a new era, was the industrial development of paleometals.

Climate changes also led to restructuring of the economy. Thus in the Bronze Age to replace the long cool and wet phase came more than a thousand-year period of gradual climate change in the direction of greater warming and dryness. Arid period was accompanied by a decrease of river discharges, slow drying of floodplain above terraces, lower of lake level, reduction of the total moisture of the continents of the Northern Hemisphere. [2, p. 81].

In XXVII–XXV centuries B.C.in all three regions it began a long aridity, which lasted in the Eastern European and Mongolian steppes till the XVII–XVI centuries B.C., and in Siberia and Kazakhstan — till the VII century B. C. The Era was also characterized by increased continentality of climate. Aridity and a sharp increase in temperature fluctuations by seasons and in short series of years led to the deterioration of living conditions in the arid regions of Eurasia. In regions of the steppe zone the duration of arid periods, the depth of aridity and amplitude of natural zones removal took place; moving of moisture was metachronous. [3, p. 16]. During this time changes in nature-climatic conditions were accompanied by the manifestation of sharp fluctuations in solar activity, to the maxima of which less favorable environmental conditions were timed, and to the minima — more favorable. In Siberia and Kazakhstan steppes the aridity was not only long, but more pronounced, especially in the second half of the Era. The displacement of natural areas in the region was significant — on the whole zone, unlike the Eastern European region, where it was not beyond the subzone.

There is no doubt that the condition of the environment, even its minor changes, had a great impact on the economic activity of man. And to the same changes of climate conditions ecosystems of various landscape as well as society not rarely respond unlike. According to I.Ivanova and T. Lukovskaya, it can be identified five types of ancient society’s reaction on improvement or deterioration of ecological conditions, which are:
1) absence of reaction when changes of habitat are insignificant or there is a large variety of conditions of habitat when redistribution of loads on local landscapes take place;
2) full or partial changes of economic-cultural types, types of economic management, aimed at reduction in accordance with changes of ecological volume of the territory;
3) migration inflow and outflow of population: from minor to complete abandonment of a territory or population explosion;
4) significant changes in a public and social life (changes in land, water and other property relations), in politics (focus on society or conquests);
5) gradual or rapid degradation and destruction of societies that failed adaptation to changing environmental conditions.

However, in the Bronze Age the vast steppe areas of Siberia, Ural, Kazakhstan and Central Asia were inhabited by tribes related by birth, which left behind bright and original culture. In science it was called «Andron» culture according to the place where the first monument was discovered.

For a long time researchers defined only one culture in Kazakh steppes which was Andron culture. Currently, instead of one culture they mark out several cultures combining them into Andron cultural-historical community.

Nowadays the search of more productive research methods to clarify the general concept of evolution and to identify the main patterns of climatic fluctuations investigations of regional character are becoming more significant. Since this time, it is universally recognized that the historical research should take into account the specific of natural regularities on three different levels: global, regional and local. All these levels

All these levels, whether or no, are reflected both on general and private rules of interaction between society and nature. Therefore, these investigations have to consider the work of A. Tairov «Climate Change in Steppes and Forest Steppes of Central Eurasia in the II–I millennium B.C: Materials to Historical Reconstructions» («Изменения климата степей и лесостепей Центральной Евразии во II–I тыс. до н. э.: материалы к историческим реконструкциям») in which he gives the description of paleoclimate of Northern Kazakhstan. Subboreal aridization, which began here approximately 4700 years ago, continued till 1700 years ago. End of II — beginning of I millennium B.C. was the era of evident ecological crisis, when rainfall amount was 50–100 mm (75 mm in general) lower than modern standard (325 mm/g), under the condition of higher than now continentality of climate.

Based on soils, buried 2800 years ago under the mounds Kara-Oba and Obaly, at the turn of the Bronze and Iron Ages, the climate was still more continental than at present, while rainfall was 50–70 mm smaller than nowadays [4, pp. 35–48]. The special researches of paleo-soils conducted here revealed changes in natural conditions. The set of features indicates the dry climate in the era of construction of ancient mound. Soils existed in the era of large mound construction were closer to modern: the amount of atmospheric precipitations has increased while continentality of climate has weakened.

In VII B.C. there was a sharp improvement in environmental conditions. Rainfall amount was close to the modern norm, but the climate still remained continental. Dark brown soil of dry steppes evolved in southern black earth. [3, p. 27].

For the region under research the evolutionary scale of N. A. Khotinsky is also the closest and reflecting recent achievement of paleobotany [5, p. 153]. According to it the gradual accumulation of after-glacial warmness reaches optimum in later-atlantic phase, after which the abrupt change of temperature regimes and moisture take place. In general for the last 10 years Khotinsky outline three main thermal maxima which are boreal (8300–8900 years ago), atlantic (5000–6000 years ago) and subboreal (3400–4200 years ago) [6, pp. 142–147].

Thus, the climate of Holocene in the frameworks of its basic line develops pulsively and its changes are spasmodic. More or less prolonged dry and warm stages are abruptly changed by decreasing of temperatures and increasing of rainfall [7, p. 138].

It follows that the paleoclimate rippling and landscape restructuring of the second half of the Holocene led to noticeable changes in the ethno-cultural map of the area under the study. They demonstrate that investigation of cultural-chronological questions and social-economical history of ancient societies in Northern Kazakhstan is not possible without taking into account ecological features and specific of this Eurasian territory as the region situated at the turn of steppes and forest-steppes. Vast territories of Ishim province of Northern Kazakhstan and significant on its depth line of South of Western Siberia were incorporated in the zone of contacts between forest-steppe and steppe cultures during various periods of the Bronze Age. Latitudinal frames of contact borders were changeable and, to a large extent, depended on landscape and climate transformations. They both separated and bring together various human collectives with different cultural-economic types. At the same tome it is necessary to take into consideration that the connection between the nature and society is a dialectically conflicting process. Undoubtedly, it does not mean only the natural influence on man and society, the most important element of it is human impact on natural- geographical environment, incorporated in social-historical process [8, p. 19].