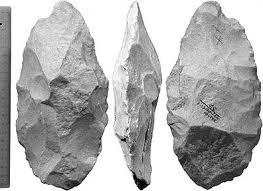 This is the time of wide human settlement in all climatic zones of land and the formation of races and racial groups.

There is a direct link between the emergence of Homo sapiens and the further development of the material and spiritual culture of  human society of the late paleolithic. This phenomenon is directly linked to the progressive development of public relations, the process of formation of the tribal community, the emergence of the first kind as a specific form of social organization of the human collective. It is believed that the tribal organization was everywhere matrilineal and matrilocal, nd the woman held predominating position in a community. Matrilineal clan, in such a way, was a exogamous group of people united by ties consanguinity with each other and a common origin on the maternal line. High position of women in public life was defined also by specifics of a communal household, a role of the woman in a family as continuers of a sort. It is no accident in the ideological representations of the ancient people emerged cult of woman – the mistress and the ancestors of the hearth.

The outlook of the late paleolith era person became complicated.  Has spread the cult of hunting magic, which was based on a belief in the power of the animal getting through the mastery of his images and symbols.It is believed that magic was a versatile instrument which appeared in this time of bright primitive art.

Ideas of soul and afterlife of the person as continuation of terrestrial existence conducted to emergence of difficult ritual ceremonies. Body of the dead strewed with red ochre, a breast decorated with necklaces from the drilled sinks and canines of a predator, a foot — bracelets from tusks of a mammoth, clothes embroidered garlands of a beads. Together with buried put products made ​​of flint and bone.

In comparison with monuments of the previous period parking of that time it is revealed a little. In East Kazakhstan Kanai, Svinchatka, Cave and Novo-Nikolsk parkings are known.  The greatest interest is represented by parking at the village Cave.

The Cave parking is on Bukhtarma's right coast at an entrance to a cave and located on the edge of the cape with an entrance to the west and represents two grottoes, united by a canopy.  S. Chernikov as a result of  exploratory excavation at a depth of  30-50 cm in the eastern part of the excavation in the 60-170 cm in the western found  paleolithic items, including a scraper with a circular touch-up, knife-edge piece of plate, knife-like tool, pyramidal shape nucleus with traces of chipping , bump and waste products from the black silicon and greenish quartz rock. Besides, fragments of  animal bones  are found: rhinoceros, bison, cave lion, etc.  Character of tools allows to date parking by the top paleolith.  In the upper paleolith processing of stone tools was more difficult:  cleaved thin plate from cores, most of which were intended to insert into bone and wooden frames, and then used as a skin and scrapers.  Wide application received and extractor technique allows to obtain weapons with a thin blade, such as spearheads darts.

From 1980  to 1983 were excavated on Irtysh on parking Shulbinka  in the New Shulbinsk area of the Semipalatinsk region. Among the 5,000 stone products are abundantly present scrapers on flakes and plates, tip, chisels, punches, cores varieties of forms and waste production.  Except stone products the centers put from pebbles, an ashes layer are found, and round the center at considerable distance there were dark stains of small diameter and a roundish form. Possibility is not excluded that this is the remains of wooden pillars that are the foundation of the home. The convenient arrangement of the district, high terrace, the river, the wood — all of this attracted the person, and dark stains and the centers testify  that escaping from the scorching sun and a rain in summertime, he built to himself easy lodgings.  Besides the cultural and community remains burial of the person who was placed in the writhed situation on the left side is revealed and is focused by the head to the west. The skeleton is in very bad preservation, as overlied shallowly, but the fact of finding it deserves attention. As the main raw material for production of tools on Shulbink's parking  were chalcedony, jasper, rock crystal and flint. Compared with the previous periods of stone age a variety of species, and not only local origin were used.  The collection is similar to the parking Altai in Siberia, which allows them to date the age of 30-25 thousand years.

On the territory of  Kazakhstan the completely studied monuments of the late paleolithic a bit, but the available data make it possible to trace the continuity of the ancient stone age  people’s material culture devolopment, and also the Kazakhstan territory settling process.

Use of materials for publication, commercial use, or distribution requires written or oral permission from the Board of Editors or the author. Hyperlink to Qazaqstan tarihy portal is necessary. All rights reserved by the Law RK “On author’s rights and related rights”. To request authorization email to mail@e-history.kz or call to 8 (7172) 57 60 13 (in - 1163)
Қазақша Русский English
MOST READ
Month Year
Recorded history of Kazakhstan. Part 2
Heroic mothers of the great steppe
How had the World War II been started?
Philosophy of the Emblem
14 monuments at Tekturmas
The rural akims: the country's hope is in the elections
Kazakh historical drama Tomiris premiered in Istanbul
Stolypin about the worries and hopes of immigrants to the Kazakh steppes
ALASH IDEA IS THE PROTECTION OF KAZAKH STATEHOOD
A tireless explorer of the Kazakh land
SWITCHING TO THE LATIN ALPHABET – UNITE ALL KAZAKH PEOPLE
Kunaev Dinmukhamed Akhmedovich
People who eat horses will kill you
Materials on theme
The historiography of the problem of archaeological definition of the Eneolithic of North Kazakhstan and Transural region
Man stretches his back
Workshop with industrial achievements
Natural conditions and habitat of ancient hominids