Kazakhstan in the Stone age 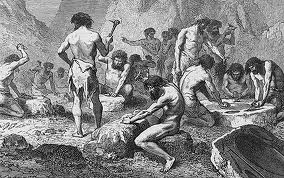 Modern ideas about life of far ancestors are based on studying places of parking, caves, grottoes where the remains of work- stone tools, waste of their production, the food remains, bones of animals

Ethnographic data from life of so-called backward nationalities of the present have also considerable value. They allow explaining better some parties of material and spiritual culture of the most ancient mankind.  But the main information nevertheless gives the most abundant material of primitive society - stone tools.

The era of ancient Stone Age is the time of formation of humanity and its economy – characterized by low levels of productive forces. Primitive economic activity consisted in use of ready-made products of the nature. The primitive person collected wild-growing cereals, fruits and berries and hunted on wild animals. Human relations were based on economic equality of collective, on the natural division of labor and were collectivist in nature.

The social organization of people in the paleolithic era was a difficult and long path of development.  The initial step was its primitive stage – the union for the common defense and attack, hunting and gathering. This prenatal social education differed with its amorphous, undeveloped public relations, lack of communal household, at the same time decency of marital relationship was inherent for it.

Primitive stage corresponds to two earliest stages of the Lower paleolith – before Acheul and Acheul periods. In the Acheulean period ripe stage for a new social organism - a primitive community grow gradually. In the age of the mousterian settled life and the natural division of labor by sex and age already exist, also initial shapes of the community appear. The human team of the late paleolith socially is characterized by a new face – adding the mature forms of the primitive tribal community.  This qualitative leap, how is considered by many researchers, coincided with the transformation of the Neanderthal type into anatomically modern humans (Homo sapiens).

© The Institute of History and Ethnology named after Ch. Valikhanov  KN RK, 2013

Use of materials for publication, commercial use, or distribution requires written or oral permission from the Board of Editors or the author. Hyperlink to Qazaqstan tarihy portal is necessary. All rights reserved by the Law RK “On author’s rights and related rights”. To request authorization email to mail@e-history.kz or call to 8 (7172) 57 60 13 (in - 1163)
Қазақша Русский English
MOST READ
Month Year
A role of Buddhism in formation of Central Asian mythologies
From the story of a blood feud
Kazakh historical drama Tomiris premiered in Istanbul
ALASH IDEA IS THE PROTECTION OF KAZAKH STATEHOOD
Stolypin about the worries and hopes of immigrants to the Kazakh steppes
A tireless explorer of the Kazakh land
SWITCHING TO THE LATIN ALPHABET – UNITE ALL KAZAKH PEOPLE
Kunaev Dinmukhamed Akhmedovich
People who eat horses will kill you
Kazakhstan's participation in the Winter Olympics has a long history
Rebooting a field of science and education
Recorded history of Kazakhstan. Part 1
Historical Dates on the Bosphorus
Recorded history of Kazakhstan. Part 2
Materials on theme
On the question of Botay ceramics’ origins
The historiography of the problem of archaeological definition of the Eneolithic of North Kazakhstan and Transural region
Another link in our genealogy
The Neolithic Era