Home Historical education We are faced by big tasks

We are faced by big tasks 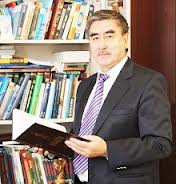 The main objective of historians - finishing to the general public of the main ways of formation of modern Kazakhstan as independent state, and Kazakhstan citizens as modern full-blooded society.

For today the problem of reforming of the Kazakhstan historical science became the most discussed in society.

This problem of functioning of historical science as full-fledged scientific discipline existed for a long time. And the reasons of crisis were also known: involvement of ideology of this science, weak methodological base etc. But the meeting held by the State secretary of the Republic of Kazakhstan by Marat Tazhin, became a critical event and created strong base for updating. This meeting and the subsequent actions made the break which has removed barriers, holding down science. That unlike former times the state came to the rescue to scientists is remarkable. And anybody before social scientists doesn't put any ideological framework, on the contrary, is done everything possible for carrying out full and in-depth studies. From now on all responsibility lays down on shoulders of historians. Speaking in images, for scientists hour came "X": or we will overcome a methodological separation from the advanced schools of sciences, or we are doomed to tail after events.

Today I would like to share thoughts what have to be our actions during the next period.

The first. Writing of the qualitative basic textbook and the anthology is represented to the most important. Society waits long ago from scientists of full, basic books meeting the most modern requirements. Creation of the similar textbook at all doesn't mean completion of scientific discussions, but initial versions of grants in which the main historical accents would be placed are necessary for being trained youth. To significant me development of the defining principles on which material giving will be based here seems. In many respects the principles of scientific search found the reflection in the book of the President of the country of N.A.Nazarbayev "In a history stream". These principles – scientific character, objectivity and complexity – have to become corner at implementation of researches. Concerning the main demands made to historical science, M. Tazhin quoted words of the Head of state who has emphasized that "all Kazakhstan identity has to become a core of historical consciousness of the nation".

The second. The today's scientist-historian has to not only master archival sources, but also develop deep concepts of research both the whole era, and a concrete case. We have to depart from a former image of the historian owning only one craft firmly. Modern opportunities allow the researcher to use achievement and other interdisciplinary sciences – the rights, sociology, religious studies, cultural science etc. Inexhaustible opportunities for research of the past will give achievements of population genetics, social psychology and anthropology. In recent years domestic archeologists made the largest discoveries, and they have to be introduced into scientific circulation.

Many questions which face today social scientists, can fully and effectively be solved through the "People in a History Stream" program. Not only deep judgment and detection of historical regularities, but also finishing to the general public of the main ways of formation of modern Kazakhstan as independent state, and Kazakhstan citizens as modern full-blooded society – here the main objective of historians. In it I see sense of operation of all case of scientists-social scientists. It is pleasant that today at universities chairs of history of Kazakhstan are restored, the contingent of the students arriving on a grant increases. For search and introduction in a scientific turn of basic traditions of ethnocultural and civilization identity of Turkic subethnos – ancestors of modern Kazakhs and Kazakhstan citizens – some groups of professional scientists are sent to China, Iran, Turkey, Russia and Great Britain.

Studying of formation of early state educations on open spaces of the Great steppe has to become a special subject. The modern tools allow us much more deeply and comprehensively to investigate evolution of the state institutes, economic life, social structure of the ethnic communities occupying this region. We should give in short terms the analysis to the largest events of the XX century. To cross out this huge layer of the history which has made life of the whole generations, having painted it with one black paint, it would be biased for purely historical reasons.

For today historians of Kazakhstan did considerable work on research of formation of the Soviet totalitarian car, the tragedy of the Kazakhstan peasantry and mass violations of the right and morals during the Soviet period. But, unfortunately, these researches have fragmentary character and aren't connected by uniform scientific methodology. Therefore it is necessary to group them within the special program "The People in a History Stream". It would help to combine efforts of all chairs of history of Kazakhstan and adjacent specialties – political scientists, lawyers and even biologists and geneticists. In coordination of efforts of scientists sectional meetings of historians with participation of representatives of local authorities gave a positive impulse. Now there is a task not to lose speed in further reforming of historical science.

In my opinion, adjustment of scientific contacts with the largest scientific centers and leading scientists of the world is perspective. Now scientific cooperation with the large centers has not system character. And the main reason for this situation is covered in former isolation of the research centers of Kazakhstan, weak knowledge with bulk of my colleagues of leading world languages: English, Arab, Chinese. The young generation of historians has to render the big help in implementation of breakthrough projects. They organized Association of young historians which never was before.

Realities are that that the country constantly is in a vice of information currents of various sense. In the world intensity in ethnic and religious questions doesn't fall down. Respectively historians have to tell the loaded word and in a question of formation of the Kazakhstan policy of toleration and tolerance. Scientists could render the practical help to the state institutes concerning cross-cultural interaction, on studying of social well-being of the population.

The newest period of Kazakhstan which has begun in 1991, already became object of studying. But owing to incompleteness of many processes, scale and the global importance of events the number of questions demands more in-depth and system studies. But it is already clear that unlike former times independent Kazakhstan is the real Homeland for all ethnoses occupying it. Modern Kazakhstan with the new capital of Astana became a child of all citizens.

In the light of carried-out reform of national history the thematic field of researches on the contemporary history considerably extends. I think that there will be a lot of work for all chairs and scientists.

Materials on theme
Priorities of scientific researches
On some problems in the study of the history of independent Kazakhstan
"History – a treasury of our acts …"
Some questions of migratory policy of the period of the Soviet Kazakhstan: sources and consequences