Institute of presidency in Kazakhstan 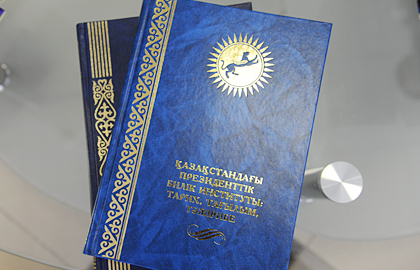 Each nation has its own way of formation and history. Al of them passed through the process of establishment and organization of state. For example, the USA, France, as civilized societies, established the Institute of President’s power, by this means launched political modernization. Let us investigate the question when did the Institute of President’s power created in our country, whether it supported in accordance with contemporary conditions and how do it develop.

During the period of coming into being of our state’s independence, there was necessary to create and develop a new system of state governance, correspond to the requirement of the time and the course of this age. The elite of Kazakhstan face the challenge to solve this complicated problem exactly in this direction.

The future of the sate depends on the results of democratic reconstructions as well as on political innovations of our state which began 20 years ago.

And we are not mistaken, when suppose that the first step, undertaken in this direction, was the decision to introduce the Service of President on April 24, 1990.

In 90-s of the ХХ century with the introduction of global processes the worsening of the inner structure of the Union of Soviet Socialist Republics (the USSR), which accelerated the large-scale challenges in the whole world, became one of the new developments taking place in the world. Habitual point of view, i.e. general appearance of Soviet citizens which became a legend, the ability of people to live, free for democratic system and market economy, the independence of mass media and electivity of authorities began to take the shape in all spheres of life.

By the mid — 90-s the reconstruction in the public life had begun while new changes implemented in all sectors of national economy. The first President N. A. Nazarbayev along with the intellectuals of Kazakhstan adopted and implemented these new changes. Thus, a new stage of Kazakhstan’s history has started.

In this respect the Head of state noted: «Taking into consideration the civilized cultural space we have to define ourselves the national state features of the development strategy, an original character of political history and culture, stereotypes of the Soviet system, ethnic traditions», this wakens up feelings about the destiny and future of the state in confession of every citizen.

The period of the collapse of the USSR began and a new page in the history of modern Kazakhstan opened.

Thus, the transition from totalitarian yoke to the democratic social order is the principal goal of sovereign Kazakhstan. Hence, independence and sovereignty form the basis of Kazakhstan’s innovation.

The assertions that democratic reforms are the basic core of modernization of social order are not groundless. The main peculiarity of changes in the state is that they conducted by peaceful and evolutional means instead of revolution.

At his time in 1991 the President Nazarbayev N.A. outlined: «Our aim is to find our own road considering interests and characteristics of multiethnic nation of our republic as much as possible, at the same time taking into account the world experience», undoubtedly, it had decisive role in selection of the way of development for Kazakhstan.

It was evidently demonstrated during the election campaign of the Supreme Council of the Kazakh SSR of twelfth legislature on March 25, 1990. A high competition, which had not taken place before, was observed during the election of the Supreme Soviet. On April 24, 1990 at the first session of deputies after a long discussion thanks to support of overwhelming majority of deputies the Law of the Kazakh SSR «On the purpose of activity of the President of the Kazakh SSR and alterations and amendments to the Constitution (Fundamental Law) of the Kazakh SSR» was adopted, on April 24, 1990 after the adoption of the law by the Supreme Council 317 deputies, from those 335 who participated in secret ballot at presidential election, supported Nazarbayev N.A., and 18 deputies voted against. As a result, Nazarbayev N.A. was elected the first President of Kazakhstan.

A candidature of Nazarbayev N.A. was unanimously proposed to this high position by the 21st Plenum of the Central Committee of Communist Party of Kazakhstan.

However, it was too early to talk about the institute of presidency at that time. Presidential activity was implemented and the Supreme Council of the President was elected.

The following significant document in detection of the President’s status and authority was the Declaration on the state sovereignty of Kazakh SSR adopted on October 25, 1990. The declaration formalized the first separation of state power. The Supreme Council holds legislative power while the President, who is the Head of state, has high administrative-executive power.

All things considered, the institute of presidential power of our country went through its own evolution of development. Along with democratic changes and appropriate requirements of the modern time, our country, entered civilized society, has chosen its own historical way.