Home E-resources In Kazakhstan any ethnos didn't lose the language

In Kazakhstan any ethnos didn't lose the language 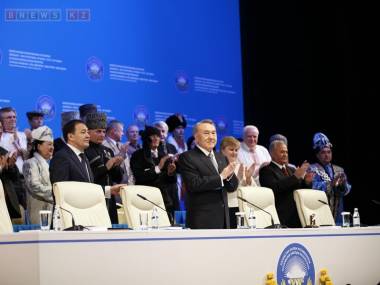 For years of independence in Kazakhstan any ethnos didn't lose the language. The President of RK Nursultan Nazarbayev reported about it during anniversary XX session of Assembly of the people of KZ

"In Kazakhstan for years of independence any ethnos didn't lose the language, on the contrary, we carefully store and we create all opportunities for cultural development of the smallest ethnic groups. The Kazakh earth united more than 100 ethnoses. Certainly, that all this variety became the uniform nation, good cement" is necessary, - N. Nazarbayev told.

Today the main factor the nation, according to the President, the Kazakh language has to become cementing.

"We often thus give examples for other countries and the states. Who wouldn't come to the USA, whether it be Chinese, Arabs, all of them become Americans and have to speak English. Also in France, Germany. At us historically it developed in a different way", - the Head of state noted.

Use of materials for publication, commercial use, or distribution requires written or oral permission from the Board of Editors or the author. Hyperlink to Qazaqstan tarihy portal is necessary. All rights reserved by the Law RK “On author’s rights and related rights”. To request authorization email to mail@e-history.kz or call to (7172) 79 82 06 (ext.111)
Қазақша Русский English
MOST READ
Month Year
A death of Ulugbek Kazakh dissidents: Amangali Kenzheakhmetuly, known as the “Gang”
Where did Tengriism come from? Armenians and their kinship with the Kazakh people Today is Kazakhstan Police Day Nurmukhan Zhanturin. Actor who played himself Doctors-comrades-in-arms of A. Bukeyhanov Aytys between Suyunbay and Katagan Nurtas Ondasynov. Kunayev’s Chief Symbols of people's hope and dreams We need to know the light and dark pages of history - Makhabbat Kozybayeva Remembrance Day for Victims of Political Repression and Famine Karaganda coal and the merchant Ushakov The great son of the great steppe