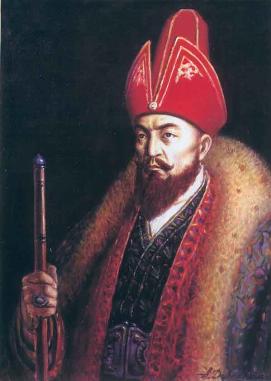 On June 27, 2013 the Institute of literature and art of a name of M. Auezov held the republican scientific and practical conference "Image of Abylaykhan in Folklore, Literature and Art".

On June 27, 2013 the Institute of literature and art of a name of M. Auezov held the republican scientific and practical conference "Image of Abylaykhan in Folklore, Literature and Art" devoted to the 300 anniversary of dzhungarsky invasion which has united in severe time three Kazakh жуза and tried to return independence of the people of khan Ablaya.

The outstanding politician and the statesman of the XVIII century was proclaimed by the national khan and we highly appreciate the contemporaries. Round its extraordinary figure all known batyrs, Biya and governors of childbirth united, were established diplomatic relations with China and the Russian Empire. Therefore our debt to collect and propagandize heritage of this outstanding personality, - I noted opening conference the director of institute, the Doctor of Philology, the corresponding member of HAH PK Ualikhan Kalizhanov.

Given it in the performance Abylaykhan's characteristic of the Russian scientist A.I.Levshina: "Sultan Abylay was very clever, perspicacious politician. Skillfully supporting enemies in interstine conflicts, he managed to avoid war and to keep integrity of the territory of the state" most fully reflects its role and the importance in the history of the Kazakh state.

Conference was held in Mukhtar Auezova's house museum and passed vividly and fascinatingly, causing the interested reaction of participants. The director of Institute of history and ethnology of Ch.Valikhanov, the doctor of historical sciences, the corresponding member of HAH PK of Hangelda Abzhanov in the report shined Abylaykhan's value in formation of statehood of Kazakhstan. Abylaykhan's personal qualities were shined on the basis of researches of many sources of the department chair of the Kazakh National university of Al-Farabi, by the Doctor of Philology, professor Anuar Tarakov.

Reports of managers of M. Auezov were devoted by departments of Institute of literature and art: Doctor of Philology Bakytzhan Azibayeva - regularity of the epos according to outstanding persons on the example of Abylaykhan, Amangelda Mukan – to questions of reflection of historic figures on the Kazakh theatrical scene, Gulmira Musagulova – the opera "Abylay Khan" of E.Rakhmadiyev in a context of modern theater.

Use of materials for publication, commercial use, or distribution requires written or oral permission from the Board of Editors or the author. Hyperlink to Qazaqstan tarihy portal is necessary. All rights reserved by the Law RK “On author’s rights and related rights”. To request authorization email to mail@e-history.kz or call to (7172) 79 82 06 (ext.111)
Қазақша Русский English
MOST READ
Month Year
Burial mounds of the southwestern part of the Semirechye region
Union of the Archives and Library
The referendum on the Constitution is a significant stage of democratization
Heroic mothers of the great steppe
Philosophy of the Emblem
14 monuments at Tekturmas
The rural akims: the country's hope is in the elections
Kazakh historical drama Tomiris premiered in Istanbul
Stolypin about the worries and hopes of immigrants to the Kazakh steppes
ALASH IDEA IS THE PROTECTION OF KAZAKH STATEHOOD
A tireless explorer of the Kazakh land
SWITCHING TO THE LATIN ALPHABET – UNITE ALL KAZAKH PEOPLE
Kunaev Dinmukhamed Akhmedovich
People who eat horses will kill you
Kazakhstan's participation in the Winter Olympics has a long history
Materials on theme
«Actual problems of investigation and teaching the history of Kazakhstan» Regional Scientific and Practical Conference
Interview of the senior research associate of Institute of history of the state of the Ministry of Education of RK Saule Bagdatova.
"Alash readings: "Scientific heritage of Alash figures on a way to independence of Kazakhstan".
Years of creation and priorities of a national historiography