Home E-resources The "Princess" of Urdzhar 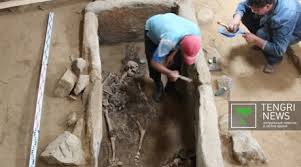 The sensational artifact was founded in Urzhar Area of Eastern Kazakhstan.

The sensational artifact was founded in Urzhar Area of Eastern Kazakhstan oblast during excavations one of the barrows by the Kazakhstan archeologists, appeared in a zone of reconstruction of Taskesken-Bakta Highway.  Research works were carried out by the Institute of Archaeology named by A.Kh. Margulan. 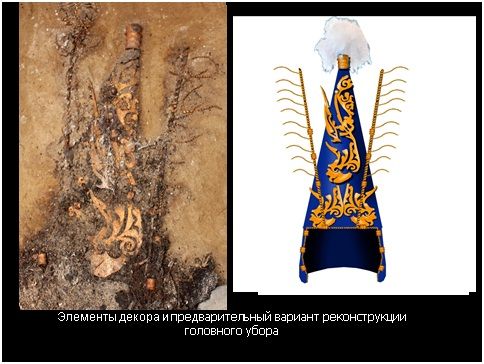 Remains of the young woman of a notable origin under a barrow embankment in a stone sarcophagus under massive granite plates, depth level on - 1,70 m were researched.  In the chamber with the buried ceramic and wooden vessels and bones of a sacrificial animal – remains of a sheep were found.  Remains of fabric of clothes of blue and green color remained on bones of a human skeleton.  Old earrings and a stone altar - indispensable attribute of female burials of that time were found at the head of buried woman.

The greatest value is represented by the peaked gold headdress ornamented with vegetable patterns and a zoomorphism ornament. The top part, decorated with a spiral from a gold wire has a headdress also arrow-shaped. The lower part of a product was decorated by ancient jewelers (zergers) with corrugated suspension brackets. In a form and an ornamental embodiment, the find reminds national Kazakh female headdresses saukele and borik. Similar headdresses as it is supposed were accessory of a full dress of Saka tribes of Kazakhstan. The similar find in Kazakhstan is known only in the well-known Issyk barrow relating to the same time, as the burial in the Urdzhar area. The "Princess" from Urdzhar is preliminary dated back to the IV-III centuries BC. 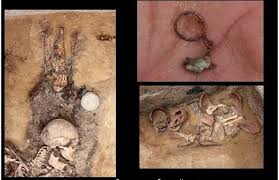 June, 2013
Use of materials for publication, commercial use, or distribution requires written or oral permission from the Board of Editors or the author. Hyperlink to Qazaqstan tarihy portal is necessary. All rights reserved by the Law RK “On author’s rights and related rights”. To request authorization email to mail@e-history.kz or call to (7172) 79 82 06 (ext.111)
Қазақша Русский English
MOST READ
Month Year
Stolypin about the worries and hopes of immigrants to the Kazakh steppes Kazakh historical drama Tomiris premiered in Istanbul
Karaganda coal and the merchant Ushakov The great son of the great steppe Kazakh dissidents: Amangali Kenzheakhmetuly, known as the “Gang” Kassym-Jomart Tokayev sent a telegram to UN Secretary General António Guterres History of pandemic in Central Asia Living for the Kyrgyz account The excavation works in the town of Syganak A death of Ulugbek Heroic mothers of the great steppe How had the World War II been started? 14 monuments at Tekturmas The rural akims: the country's hope is in the elections

Materials on theme
The Altai Kazakhs –Ancestors of Ancient Cultures
From the heart of millennium
The treasure from Sayram Medieval site
Flies, flies the steppe mare...