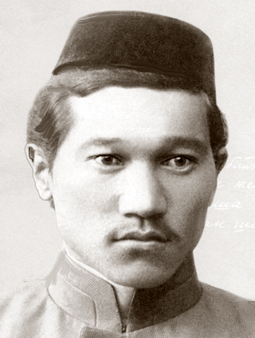 Mirzhakyp Dulatov is a prominent Kazakh educator, social activist, poet, writer, one of the leaders of the government of "Alash Orda" and the national liberation movement in Kazakhstan.

Mirzhakyp was two years old when his mother died, and 12 years old when his father died, he was raised by his brother Askar. Askar helped Myrzhakyp to continue his studies as their father wanted; he paid a particular attention to his education.  Mirzhakyp was born and raised in the village, he was working there as well, and everyone called him “a rural teacher”.  He was worried about the difficult life situation of his people; it made him think of it. He promised to be a reassurance to his oppressed people, to be with them in times of grief and in times of joy. He devoted himself to serving the people with whole heart.

He engaged in self-education and learned Russian, after this he started to study the works of progressive Russian writers. He was the first who felt the approach of many violent things that have changed the world in which he lived. He spoke to the people:

Do not spend your life in vain, in the dark!

He tried to “wake up” people with his verses, called them to enlightenment, to useful activity. He saw the main condition for achieving the freedom, in overcoming the darkness of ignorance. His appeals: “Wake up, Kazakh!” were described in the works of Ahmet Baitursynov who was older than him for almost 12 years.

The early "awaken", proud Mirzhakyp, he’s always been at the forefront of the national struggle. He influenced the younger generation with his verses and personal example, urged them to serve the people with whole heart. All his works, journal articles, poems and novels were devoted to the interests of the people. As well as Ahmet Baitursynov, he put a lot of effort in education of youth, in instilling the respect for traditions of his people and the love of his native land.

The voices of these two giants have always been in tune, they were close on the historic podium, even though the fate has scattered them in different directions; both were persecuted and both sat in prison. They were indifferent to material possessions. They were more concerned with the problems of the people; they spoke about the suffering of the people. Both of them were declared as enemies of the nation, both were shot, and their names were deleted from the history. But in people's mind, two of them stand together.