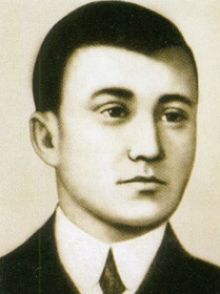 Sultanmahmut Toraygirov (Kazakh: Сұлтанмахмұт Торайғыров, 29 October 1893 − 21 May 1920) was a prominent Kazakh writer and poet. He was born in Qyzyl Tau (near the city of Kokshetau) but moved to Bayanaul in the province of Pavlodar at the age of four. Toraygirov wrote his first poems when only 13 years old. From 1913 on, he was the sub-editor for the first Kazakh journal Aikap. In 1914 and 1915 he worked as a teacher in Bayanaul. In 1916 Toraygirov moved to Tomsk in Russia, but the next year the February Revolution made him return to Semey, in Kazakhstan. During this time he developed his style and wrote prolifically.

Toraygirov released several poem collections and his novel Beauty Kamar, released posthumously in 1933, was one of the first Kazakh language novels. He was very active politically, advocating both Kazakh national interests and the new Soviet ideals. However, he died in 1920, at the age of only 26, and therefore couldn't witness the birth of the Soviet Union.

The state university in Pavlodar is named after Toraygirov.