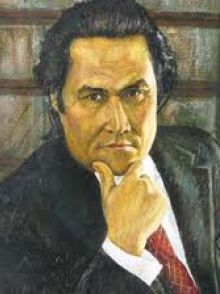 He was born on February 9, 1931, the village Karasaz, Narynkol district, Almaty region.

He graduated from high school. Aulsoveta worked as a secretary and head of the red yurt, an employee of the Komsomol, the literary staff of the local newspaper.

In 1954-1962 he worked as a radio announcer on Kazakh, a teacher, in the years 1962-1972 - head of department of newspapers "Sotsialistіk Kazakstan", "Kazakh әdebietі" magazines "Madeniet zhane tұrmys", "Zhuldyz", in the years 1972-1973 - the literature consultant of the Union of Writers of Kazakhstan.

Mukagali Makataev Karasaz was born in the village of Alma-Ata region, in the foothills of the Great Khan Tengri. He graduated from the Literary Institute. Gorky. Author of "Life is a legend," "Life is a river", "Mozart's Requiem", "Favorites." Song of his poem "Sarzhaylyau" became popular. Translated into Kazakh Russian classics, foreign literature, including Walt Whitman, "The Divine Comedy" by Dante. His name is put in front of them, Abay Auezova and other classics of Kazakh literature. Laureate of the State Prize of Kazakhstan ... Mukagali and his peers have become the main labor force and replaced the adult men who had gone to the front. They grazed cattle and plowed land, harvest and threshing. Along with the women and old men they considered themselves to be responsible for a life in the rear and very proud of it.