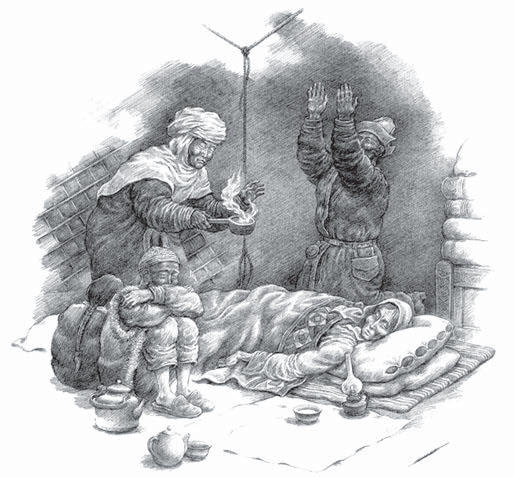 Since ancient times Kazakhs believed in the influnece of various signs on their life.
In fact, superstitions touched upon different sides of life in the steppe.
1. If someone ate brain of the spinal cord, according to superstitions, he would sink in water.
2. If a swallow made a nest in the dome of the yurta, the hosts would not leave until the baby birds grow up and fly away, they would not ruin the nest.
3. One should not go with his hands clenched behind, it is not good, as it reminds a prisoner or a captive with the hands tied behind.
4. It is not accepted among Kazakhs to shake off water from hands, they should be thoroughly wiped with a towel. The one who shakes hands would be punished by a water master and this causes springs to become clogged.
5. Kazakh believe: if there is noise in left ear — he’ll hear news about somebody’s death. In this case they repeat three times: «Right ear, right ear...» and say a good wish: «let it run good». Noise in the right ear is a presage of joy. «Lead to good» they say them and hit the base of the right ear with the thumb of the right hand. It is a desire to make the wish come true and happiness irreversible.
6. Salt is not scattered for no reason, as no dish has taste without salt. «Essence of food in its salt» is reckoned by Kazakhs. When salt is scattered — welfare is scattered away. The one who lets that happen is doomed to drag out a miserable salty existence unless the scattered salt is melted.
7. Kazakhs usually disdain the man who managed to abandon three wives in a row. Children should not take treats from the hands of such a person — so that they would not get infected with his «good-for-nothingness».
8. If there are many black moles of the size of millet grain on the body he would have many daughters.
9. Kazakhs spit only through his left shoulder. Right shoulder is a saddle of the guardian angel that might fly away and abandon the person he protects because he would disdain the spit.
10. One does not eat the food that was left open for a night. Such food is reckoned filthy and not good as a devil fouls it.
11. Kazakhs do not give their own headwear to strangers. This may cause his family diminish, not grow.
12. Kazakhs reckon that elbow bone has supernatural power. It could substitute a shepherd for the cattle, i.e. protect cattle from wolves and thieves. For that they put it in a yurta. According to beliefs of Kazakh people, this elbow bone in the form of a man guards cattle from thieves and appears in front of them in the sight of a man. Kazakhs call this bone kary zhilik. The elbow bone Kazakhs also wear tied to the front saddlepin as a guard of the saddle set and a horse.
There are a lot of beliefs and signs that Kazakhs have; almost all of them are applied to various cases in life, therefore, it was not possible to reflect all of them in one article in full. Those who are interested may read about them more in the collected edition of Sh. Ualikhanov, in the educational publication of A. Divayev, in the collection of Seit Kenzheakhmetuly and others.
Use of materials for publication, commercial use, or distribution requires written or oral permission from the Board of Editors or the author. Hyperlink to Qazaqstan tarihy portal is necessary. All rights reserved by the Law RK “On author’s rights and related rights”. To request authorization email to mail@e-history.kz or call to 8 (7172) 57 60 13 (in - 1163)
Қазақша Русский English
MOST READ
Month Year
A role of Buddhism in formation of Central Asian mythologies
From the story of a blood feud
Kazakh historical drama Tomiris premiered in Istanbul
ALASH IDEA IS THE PROTECTION OF KAZAKH STATEHOOD
Stolypin about the worries and hopes of immigrants to the Kazakh steppes
A tireless explorer of the Kazakh land
SWITCHING TO THE LATIN ALPHABET – UNITE ALL KAZAKH PEOPLE
Kunaev Dinmukhamed Akhmedovich
People who eat horses will kill you
Kazakhstan's participation in the Winter Olympics has a long history
Rebooting a field of science and education
Recorded history of Kazakhstan. Part 1
Historical Dates on the Bosphorus
Recorded history of Kazakhstan. Part 2
Materials on theme
The Conference "Zhansugurov readings" dedicated to the Independence Day of the Republic of Kazakhstan
The old-timer building. The house of merchant Sokolov
Mysteries of Names (Esimder syry)
Without knowing the past there is no future