Change in the "special contingent" in the Great Patriotic War 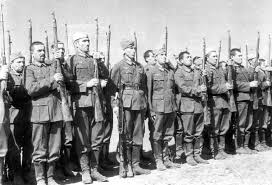 The Great Patriotic War has changed the lives of all the people of the Soviet country, millions of people volunteer went to the front heroically worked in the rear, bringing the Great Victory. The War had become an ordeal of the peoples of the USSR, their readiness to defend the freedom and independence of the Soviet Motherland. Despite all the hardships of forced industrialization and collectivization and mass repression, under the slogan of struggle against «enemies of socialism», majority of people retained faith in the socialist ideals and slogans, confidence in the leadership of the country [1,146].

Their number increased, when in the first period of the war from the areas which were threatened by the Nazi occupation, was evacuated 27 210 colonies and camps of the Gulag to the total number of prisoners 750,000 people. In Kazakhstan labor settlers were evacuated from the Ukrainian SSR, they were placed in the Karaganda. [3] According to first quarter of 1941, 10 regions of Kazakhstan resettle 180,015 labor settlers, the greatest part of them in the Karaganda 87,787 people [4]. The War amended camp life: as industry workers, prisoners were transferred to Labor Camp for continuous working week. Since the beginning of the war, the KarLag (Karaganda Labor Camp) received from GULAG NKVD number of orders for isolation of prisoners, enhanced protection, removal of the loudspeakers, the prohibition to issue newspapers, an increase of up to 10 hours of work and production rate to 20% [5,7–8].

«Special contingent» 1920–1930-ies., which was formed by prisoners and the dispossessed, special settlers, due to the huge losses of the first months of the war was one of the sources of replenishment of the Red Army. By the decrees of the Presidium of the Supreme Soviet of the USSR of from July 12 and November 24, 1941, prisoners convicted of truancy, domestic and minor officials and economic crimes were released prematurely, and subject to an appeal to the Red Army.
Gulag released 420 thousand prisoners [6, 24–25]. These people were able to «redeem» their guilt to the community by participating in the fight against yield fascism. With the release of resolution of the State Defense Committee (GKO) № 1575ss on April 11, 1942 were allowed to recruit and former kulaks, although according to the this guidance Main Directorate of the Red Army number 22/181387 dated February 17, 1940 in the army, they were not called to [7]. Mobilization of labor settlers at the end of 1941–1942 provided conscription of 60747 people, 11294 of them from Kazakh SSR. [8]

The war led to a decrease in the number of «special contingent», but this decline was offset by new sources. Since the first day of the war was discontinued release imprisoned for treason, espionage, terrorism, sabotage, Trotskyites and rights; for banditry and other heinous crimes against the state. Number of persons convicted of counterrevolutionary and other particularly dangerous crimes increased more than 1.5 times. The total number of detainees with the release to December 1, 1944 amounted to 26 thousand people. Besides, about 60 thousand people, which ended the sentence, were forcibly abandoned at camps «free hiring» [6, 23].

The war also caused the need for the organization of «labor front» in the rear. When hostilities purchased rampant and much of the territory of the USSR has been occupied by the enemy, there is an urgent need for the early establishment of new facilities of the defense industry. Protracted war demanded a sharp increase in the production of ammunition, shells, mines, artillery, tanks, aircraft and other equipment [9, 529]. That part of the «special contingent» that could not be sent to the front was used for forced labor work, adding «labor army». According to P. Knyshevskogo, the State Defense Committee (GKO) to mobilize manpower for alternative service (labor front) and in the military-mobilized entered simultaneously with the deported peoples, persons not fit for health for military service, demobilized from the army contingent Gulag and internees [10]. Several labor divisions like construction (working) battalions, special construction and mounting parts (OSMCH) and working column were organized. Construction (work) battalions were formed during the Great Patriotic War by the NKVD of the Red Army soldiers who had relatives abroad or lived there themselves trapped in an environment or captured, lost military or party documents, exhibit anti-Soviet sentiments, previous convictions, which were connected with deserters. Special construction and mounting parts were formed from the first days of the war for the construction of the defense industry.

In September 1941, all the previous and special construction and mounting parts (SCMP), construction battalions were renamed the building columns and translated into economic calculation. The so-called labor columns were formed during the mobilizations in 1942–1944, conducted NKVD of the citizens of those nationalities who fought against the Soviet Union — the Germans, Finns, Romanians, Hungarians, Italians and others. They were organized in accordance with the decision of the National Defense Commission № 1123 from 10 January 1942. In Total to these columns have been mobilized more than 400 thousand people, which included 20 thousand representatives of other nationalities (Chinese, Koreans, Bulgarians, Greeks, Kalmyks and Crimean Tatars). 220 thousand mobilized people were used in construction and in the NKVD camps. Also 180 thousand were used in other commissariat’s objects [6, 24]. Construction (work) battalions and (SCMP) converted to construction or labor columns, working column — constituted «labor army», which was formed from both the civilian population and forcibly mobilized the labor front. At the same time, most of it in the special settlers was deported to Kazakhstan. The management of the camps was engaged in arranging accommodation, security and labor.

In 1941, there were two other categories in the «special contingent» — internees and prisoners of war. Since the beginning of the Great Patriotic War in the USSR have been interned all civilians — citizens of other states. Interned citizens, as prisoners of war, were placed in the camps of the Main Office on POWs and Internees of People’s Commissariat of Internal Affairs of USSR. [11, 17]. To do this, in June-July 1941 was formed two camps in Karaganda and Aktobe regions. By the end of 1941 registered in the Office on POWs and Internees of NKVD were 9 thousand people. The number of prisoners increased from the end of 1942, after Hitler’s entourage at Stalingrad [12, 14].

April 22, 1943 the Decree of the Presidium of the Supreme Soviet of the USSR «On the penalties traitors and betrayers of the motherland and for the introduction of these individuals, as punishment, hard labor». Thus were created the legal basis for the emergence of another category of «special contingent» — convicts. By decree of the Presidium of the Supreme Soviet of the USSR «On the penalties for fascist villains responsible for the killings and torture of civilians and the Soviet Red Army prisoners, for spies, traitors from among Soviet citizens and their accomplices» of April 19, 1943, capital punishment — the death penalty could be replaced with hard labor for a term of 15 to 20 years [13, 123]. To maintain these kinds of special contingent during the war and after its completion in Kazakhstan operated 14 camps of the People’s Commissariat of Internal Affairs of the USSR for war and internees, 4 of them were located in Central Kazakhstan [11, 18]. The first echelon of POW in the amount of 1436 people arrived to Spassky Special Camp in August 1941. [14] 1943 internees and prisoners of war are beginning to be used as labor camps, but only from 1947–1948, their productivity began to grow and by 1949 the camp of Main Office on POWs and Internees become fully viable [11, 19–20]. Thus, during the war the greatest return gave the work of special contingent of GULAG, which contained the Soviet citizens, and not contingent the Main Office on POWs and Internees. During the war, the term «special contingent of the NKVD» changed under it now meant the person tested and filtering in the special camps of the NKVD, renamed in February 1945 in verification — filtration camps (VFC) of the NKVD [6, 25]. NKVD’s special camps themselves were created in 1941 by the decision of State Defense Committee № 1069 from December 27, 1941 to check the former Red Army soldiers held captive and surrounded. Special camps obeyed Division NKVD special camps, from February 1945, the department of verification — filtration Division camps of the NKVD.

Materials on theme
The Head of State with Nurmagambetov S.K., Hero of the Soviet Union, the first Minister of Defence of the Republic of Kazakhstan
Scientists will visit archives of other countries
«To the new architecture of the global financial system». On the rostrum of the second Astana Economic Forum
Text of statement of N.A. Nazarbayev at constitutive conference of the International Fund for Saving the Aral