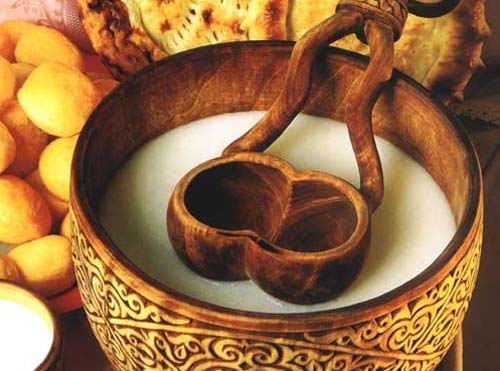 Among the Kazakhs, the interference of a boy (men) in cooking or in the production of food was considered as a disgrace, on the other hand, it was an honor for men to milk the mare, and this duty was

Among the Kazakhs, the interference of a boy (men) in cooking or in the production of food was considered as a disgrace, on the other hand, it was an honor for men to milk the mare, and this duty was honorable. Probably, this custom preserved from the Scythian times, it was described by Herodotus - (OJ). It was not right to pour the residues of kumiss that were left on the bottom of the cup after drinking. Some people do not know the customs and habits of the Kazakhs, some, unfortunately, neglected them, and so they poured the residues of kumiss on the ground. Then Kazakh looks on the visitor with horror – host to the visitor. Once in the morning, one person, after milking mares, went home with a full bucket of kumiss and another person saw the kumiss in the bucket and said: "Oypyrmay what a kumiss, like a pure stream of water". When the host poured kumiss in a wineskin, and looked into the bucket, he found that the stone at the bottom split in to two parts. When someone cursed, someone say, "Your Tongue is not a stone." "The tongue can split the stone if not a stone, so the head" - said in a Kazakh proverb.

Let the god to fulfill every wish

Let there be a lot of mares,

Let there be many kumiss

Children will be healthy,

The relatives will be friends

Let the unity be strong

Unlike on other toys, all the blessings on the kumiss toy should begin with the patron saint of horses Kambar. According to Kazakh legends, Kambar is not only the patron of horses, but also he was the first who prepared kumiss. When people milked the cows, they cooked her milk, just like the milk of sheep, and therefore they have tormented, as there was nothing good, but they wanted to cook kurt, cottage cheese, then Kambar-Ata cooked kumiss and taught everyone how to do it.

From the book of O. Zhanaydarov "Tengrianism: myths and legends of ancient Turks" some of the customs and beliefs of the Kazakhs, associated with a horse.

Use of materials for publication, commercial use, or distribution requires written or oral permission from the Board of Editors or the author. Hyperlink to Qazaqstan tarihy portal is necessary. All rights reserved by the Law RK “On author’s rights and related rights”. To request authorization email to mail@e-history.kz or call to (7172) 79 82 06 (ext.111)
Қазақша Русский English
MOST READ
Month Year
Recorded history of Kazakhstan. Part 2
Heroic mothers of the great steppe
How had the World War II been started?
Philosophy of the Emblem
14 monuments at Tekturmas
The rural akims: the country's hope is in the elections
Kazakh historical drama Tomiris premiered in Istanbul
Stolypin about the worries and hopes of immigrants to the Kazakh steppes
ALASH IDEA IS THE PROTECTION OF KAZAKH STATEHOOD
A tireless explorer of the Kazakh land
SWITCHING TO THE LATIN ALPHABET – UNITE ALL KAZAKH PEOPLE
Kunaev Dinmukhamed Akhmedovich
People who eat horses will kill you
Materials on theme
Establishment of the Commonwealth of Independent States. Alma-Aty meeting 1991
26
"We prevented the Third World War"
Institute for Philosophy, Political Science and Religion Studies