The Nomadic Civilization and shezhire 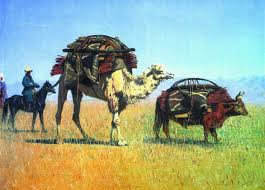 Most of the ancient civilizations like Egypt, Mesopotamia, Ancient Greece, Rome, China and others, originated in the subtropical zone.

Most of the ancient civilizations like Egypt, Mesopotamia, Ancient Greece, Rome, China and others, originated in the subtropical zone. The subtropical climatic conditions determined the farming as the most efficient type of agriculture. These civilizations that arose in different places and at different times, formed around certain centers where we could find a large number of artefacts. Their main value was the fertile land. Moreover, all the relationships in society were based on ownership of the land. A large concentration of population created these unique pockets of ancient civilizations for centuries.

Unlike the agricultural civilizations, the nomadic culture originated in the steppe. If you look at the map, it is clear that a significant part of the Eurasian land is occupied by the steppe. Steppe is a place of residence of the Turkic peoples. The special form of farming – the nomadic herding originated here for a few decades before our era. It has survived to the present day, as it is the best way of life in the desert. All pastures were divided between tribes. The genealogical unification of people gave a number of advantages, thus it was easier to hold the territory and easier to farm.

Under the conditions of nomadic pastoralism, tribe was the main structural unit of the state. The property and social status of each person is determined by its position within the genus. During the hostilities, each tribe sent a certain number of soldiers. The head of the clan was the main person to do the business among the tribe members. The large tribes were subdivided into the subgenus, while the tribes were united in the labor unions or zhuzes. The head of State Hagan or Khan solved all the major issues of governance with the heads of the tribes and zhuze . This structure has been unchanged for centuries. Therefore, for each individual was vital to know that he or she belong to the genus. Without belonging to his tribe, the person could be thrown out of society.

The nomadic pastoralism do not require a sufficient number of workers, but it gave a large gain of the product. With proper management of the farmstead, the number of livestock will grow rapidly and provide nomads with everything they need - food, clothing, shelter. Therefore, a portion of the released people could develop other activities: mining and processing of metals, wood, ceramics production, tanning leather, cloth, felt, production, jewelry, medicine, astronomy, science and religion. In the oases of the steppe, where the conditions are suitable, it is possible to develop the agriculture. The population out there led a sedentary life and built the city. The availability of settled and nomadic population has led to differences in the production and as a consequence to the emergence of barter and trade.

The availability of human resources in the desert with well-developed skills to overcome the long distances, the well-developed horse and camel breeding, as well as the invention of the wheel and the wagon led to intensive development of trade. That is how the Great Silk Road was created. It lasted for more than three millennia, until the 16th century AD, until the sea route from Europe to Asia was established and America was discovered.

The Kazakhs cherish their genealogy. It sits deep in the subconscious even in the minds of the modern Kazakhs. People are not always aware of why they store their shezhire, but they firmly believe that it is very important. Many people do not even know all their pedigrees, but they clearly know to which tribe they belong. Every Kazakh family has shezhire. Shezhire is the genealogical records. They are passed from father to son and consist of several generations of ancestor’s on the male line. Sometimes these records include the most outstanding women. In addition, these records contain the biography, history and geography of the most significant events and legends. Often the families kept the following things as the relics of their ancestors: books, saddles, clothing, jewelry, etc. Often these things are from 16-18 centuries. It is very natural thing for Kazakhs to know their shezhire and it is not perceived as something unusual. But if you look at it from the point of view of other people, this phenomenon looks extraordinary. Many of our friends were quite surprised when they heard that we know about thirty generations of our ancestors.

The current situation with the genealogical heritage of Kazakhs is ambiguous. On the one hand, the historians collect the shezhire materials and study them, the Kazakh language media published a lot of interesting materials on this topic. But due to the fact that in today's society of Kazakhstan, the Russian-speaking population is dominating, including Kazakhs themselves, these media do not have enough audience. In the Russian media, which have both popularity and influence, the topic is not addressed. The popular initiatives lies in the fact that the representatives of large tribes such as naiman, dzhalair, argyn and other published books on the genealogy of a kind, containing of more than 50 000 names. The official structures are not trying to help, they afraid of tribalism and a split within the Kazakhs zhuzes and tribal affiliation. Of course, this is the legacy of the Soviet era, when it was a taboo subject and the influence of the media that speculated on the popularity of shezhire, and wrote the scandalous articles about the fact that the government officials are secretly carried out the personnel policy of tribal affiliation.

We got a rich heritage from the ancient civilizations of the steppe. However, there are still many white gaps and the time distortions much is not understood. We want to contribute to the study and promotion of the history and culture of the Kazakh and other Turkic peoples for mutual understanding, and mutual rapprochement people. Recently, with the fading of the nomadic civilization its values have been lost. The generation of our fathers and grandfathers will end soon, and with them the memories. Another couple of generations and the shezhire will be forgotten. We would like to preserve this heritage of ancient civilizations.

Use of materials for publication, commercial use, or distribution requires written or oral permission from the Board of Editors or the author. Hyperlink to Qazaqstan tarihy portal is necessary. All rights reserved by the Law RK “On author’s rights and related rights”. To request authorization email to mail@e-history.kz or call to (7172) 79 82 06 (ext.111)
Қазақша Русский English
MOST READ
Month Year
Recorded history of Kazakhstan. Part 2
Heroic mothers of the great steppe
How had the World War II been started?
Philosophy of the Emblem
14 monuments at Tekturmas
The rural akims: the country's hope is in the elections
Kazakh historical drama Tomiris premiered in Istanbul
Stolypin about the worries and hopes of immigrants to the Kazakh steppes
ALASH IDEA IS THE PROTECTION OF KAZAKH STATEHOOD
A tireless explorer of the Kazakh land
SWITCHING TO THE LATIN ALPHABET – UNITE ALL KAZAKH PEOPLE
Kunaev Dinmukhamed Akhmedovich
People who eat horses will kill you
Materials on theme
Astronomy is the most ancient of the sciences.
11
Gerassomiva Eleonora Ivanovna
Goryachev Alexander Anatolyevich