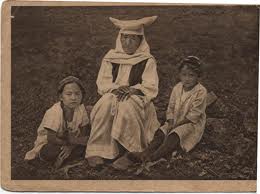 Kyrgyz is a very ancient race. The word Kyrgyz means the same as the Kazakh - "wandering, free (wandering alone, wild)".

It is known that in the third century BC, the Kyrgyz nomads wandered in the lands between the ridges of Tyannu-Ola and Tau. In times of Genghis Khan, Arysaynal was the Khan of Kyrgyz. Aina is the title of Khan among Kyrgyz people. The name Aris. Genghis Khan sent the ambassador Bari (Turamysh) to him in order to force him to comply with the requirements; the Khan of Kirghiz accepted the conditions and sent him a white falcon, along with other gifts. According to Abulgazi (the progenitor) Kyrgyz was one of the grandsons of Oguz Khan. Kirghiz people are the descendants of his. Currently, the bulk of the Kirghiz live in their ancient land, from the pass of Syntas (western spurs of Alatau) to the mountain peaks of the Pamirs. They are divided into the right and left (on the slopes of Alatau) Kyrgyz. Their tribes: bugy, sarbagash, solty, sheriek, bagish, sayak. These six tribes are the descendants of certain Sagay. Other three are Edigene, Munkish, Ishkilik, the Edigene branch. The last two kinds are our Kipchak, Argyn and Naiman, became Kyrgyz. Even though we are now call ourselves Kazakhs, we actually part of the Kyrgyz people.

And although we were later called Kazakhs , actually we also hails from the Kyrgyz people

From the book of Shakarim Kudayberdy-uly "Genealogy of Turks, Kyrgyz, Kazakhs and their Khan dynasties". Translation by B. Kairbekov. Alma-Ata, Dastan JV, 1990
Use of materials for publication, commercial use, or distribution requires written or oral permission from the Board of Editors or the author. Hyperlink to Qazaqstan tarihy portal is necessary. All rights reserved by the Law RK “On author’s rights and related rights”. To request authorization email to mail@e-history.kz or call to (7172) 79 82 06 (ext.111)
Қазақша Русский English
MOST READ
Month Year
Stolypin about the worries and hopes of immigrants to the Kazakh steppes Kazakh historical drama Tomiris premiered in Istanbul
Karaganda coal and the merchant Ushakov The great son of the great steppe Kazakh dissidents: Amangali Kenzheakhmetuly, known as the “Gang” Kassym-Jomart Tokayev sent a telegram to UN Secretary General António Guterres History of pandemic in Central Asia Living for the Kyrgyz account The excavation works in the town of Syganak A death of Ulugbek Heroic mothers of the great steppe How had the World War II been started? 14 monuments at Tekturmas The rural akims: the country's hope is in the elections

Materials on theme
For young man from Kazakhstan – from the Ukrainian Komsomol
At the CICA’s Summit
Sworn brothers. Nursultan Nazarbayev and Nicholas Litoshko
With the Director-General of UNESCO Federico Mayor at the celebration in honor of the 150th anniversary of Abay’s birthday