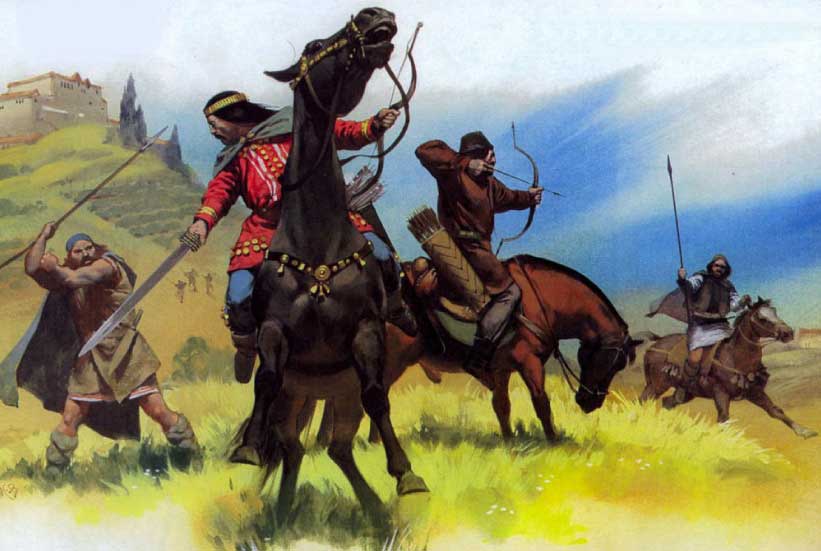 He was the founder of the Persian tribes - king CyrusII, who in 550 BC defeated and subdued the Medes and created a huge country that included the regions of Central and South Asia.

He was the founder of the Persian tribes  - king CyrusII, who in 550 BC defeated and subdued the Medes and created a huge country that included the regions of Central and South Asia. In the Achaemenid State ( in the interval between 530 and 522 years. BC. E . ) Consisted of Parthia , Khorezm, Bactria, Sogdiana , Saka , and the people who were on the territory of Central Asia and Kazakhstan , were conquered by the Achaemenids , or subordinate to them .

To North from Bactrian , Sogdians and Khorezm , in the steppes of Kazakhstan , according to ancient sources, inhabited by nomadic "tours with fast horses." Tours in the Persian sources referred Saks , which means " mighty men ", and in the writings of Greek authors appear under the name of Scythians , which came into use extensively as a synonym for the nomads.

The Roman scholar I c. n . e . Pliny the Elder wrote : "On the other side of the Jaxartes ( the ancient name of the Syr Darya ) live Scythian tribes . The Persians generally called them Sakas ... Number of Scythian peoples indefinitely ... Celebrities including Saks , Massagets dai , issedonov ... arimasps . "

Saki, judging by the extant descriptions, were pastoralists , were breeding horses, cattle, sheep and cattle were splendid horsemen and archers .

Under the name of the Scythians and Saks Greeks and Persians meant , most likely, many associations related tribes . The most numerous of them was a union Massagetae , which Herodotus ( wrote: " The people of this is the numerous and warlike , lives in the east on the other side of the river Arax (apparently, the Syr Darya ) against issedonov ... For clothing and lifestyle massagets like the Scythians. they fought on horseback and on foot . Know both methods of war , fighting with bows and spears , and usually armed with axes. All items out of their gold and copper ... they do not sow , feeding pets and fish, which delivers them in abundance Arax river . They drink milk . "

Other authors mention the fact that "for the Sughd, the river Jaxartes ( Syr ) lived Saks."

In the Persian cuneiform inscriptions refers to three groups of Sakas : paradarayya (Overseas Saks ) , Saks - haomavarga ( Saks , beverage manufacturing haomu ) , Saks - tigrahauda ( wearing pointed hats ) . Where these tribes are located , it is difficult to say , because the precise scientific geographical references ancient writers have left . According to some researchers , saki paradarayya settled in the Aral Sea , the lower reaches of the Syr Darya and Amu Darya , "or in the Northern Black Sea ; saki tigrahauda - in the middle Syr Darya and the Tien Shan ; saki haomavarga - in the valley of the Murghab . According to K. Akishev , Saks tigrahauda Iranian - written sources correspond to the Scythians ortokaribantii because both words mean " Saks in pointed hats ." In addition, Saks depicted on bas-reliefs from the palace of Xerxes at Persepolis have Mongoloid features and are tall pointed hat, most likely, scientists believe, is saki tigrahauda . And as one of the centers of the Mongoloid could be Seven Rivers area , he concludes that the saki tigrahauda lived in the Seven Rivers . This assumption is confirmed by the fact that buried in a mound of Issyk Saka king wore a tall pointed hat. According to the researcher , in the tribal union of Saks were also aksatagi , Arist and possibly argippei .

M.K. Kadyrbaev thought aorsy - savromatskih one of the tribes living in the Southern Urals . Lived north of the boudins , the land which is' covered with thick forest of different breeds , "and further north - and fissagety yrki , engaged in hunting . Argippei living " at the foot of high mountains ", most likely placed in the south- eastern Urals . Saka tribes Arimaspi and " guarding the gold vultures ", located perhaps in the Altai , where the gold mines .

Issedonov M.K. Kadyrbaev puts in the vast Central Kazakhstan. Final decision about where different tribes lived Saks, depends on research of archaeologists , for only by archaeological sites can reveal differences in material culture .

Use of materials for publication, commercial use, or distribution requires written or oral permission from the Board of Editors or the author. Hyperlink to Qazaqstan tarihy portal is necessary. All rights reserved by the Law RK “On author’s rights and related rights”. To request authorization email to mail@e-history.kz or call to (7172) 79 82 06 (ext.111)
Қазақша Русский English
MOST READ
Month Year
Recorded history of Kazakhstan. Part 2
Heroic mothers of the great steppe
How had the World War II been started?
Philosophy of the Emblem
14 monuments at Tekturmas
The rural akims: the country's hope is in the elections
Kazakh historical drama Tomiris premiered in Istanbul
Stolypin about the worries and hopes of immigrants to the Kazakh steppes
ALASH IDEA IS THE PROTECTION OF KAZAKH STATEHOOD
A tireless explorer of the Kazakh land
SWITCHING TO THE LATIN ALPHABET – UNITE ALL KAZAKH PEOPLE
Kunaev Dinmukhamed Akhmedovich
People who eat horses will kill you
Materials on theme
Ashamay
11
Kaskelen Kazakh school named after Abay. Photos of the 1950
Text of statement of N.A. Nazarbayev at constitutive conference of the International Fund for Saving the Aral