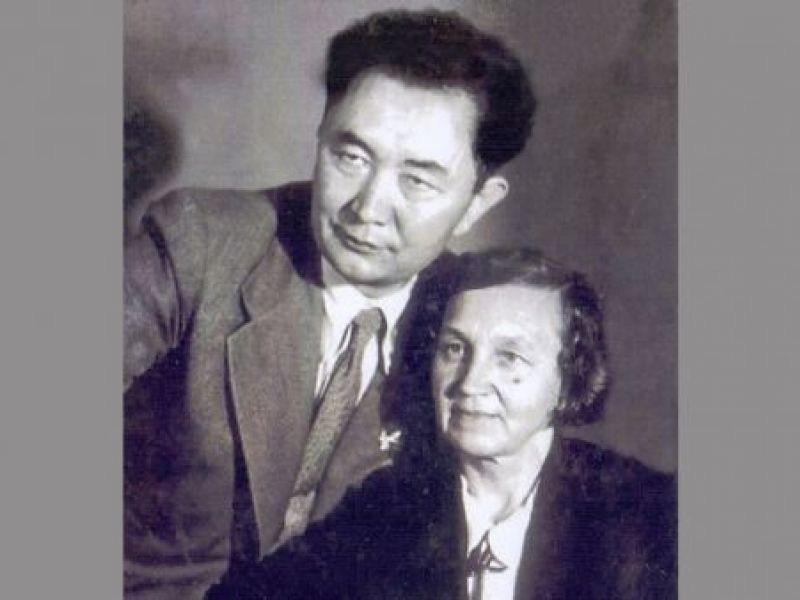 The name of Kanysh Satpayev is familiar to every person, living in Qazaqstan. He is the founder of the Qazaqstan school of metallogeny and the Qazaq Academy of Sciences.

He discovered one of the largest copper ore deposits in the world - the Ulytau-Dzhezkazgan deposit (Qazaqstan).

We have all heard an old expression “Behind every great man is a great woman”. In most of the cases the woman is overshadowed by the reputation of her man and she is defined solely as his wife, sister or mother. But all of them have stories of their own…  Behind Kanysh Satpayev stood his faithful muse, wife, friend and just an angel Taisiya Satpayeva (Koshkina).

Taisiya Satpayeva (Koshkina) was born on May 22, 1900 in the village called “Zyryanovsk”, situated in the East - Qazaqstan Region.

After completion of the secondary school in the city of Semipalatinsk, she entered the Faculty of Geology of the Tomsk Institute of Technology. In 1925, Taisiya Satpayeva (Koshkina) graduated it. She became one of the first women to be granted a diploma of a Mining and Geological Engineer.

In her student years at one of the frat parties, Taisiya met Kanysh Satpayev, a student of the same faculty. They liked each other and began to date. Due to the fact that women, trained in geology and mining engineering were treated by people with some distrust, at the beginning of her career it was very difficult for her to find an appropriate job. She had to work as a teacher in the Semipalatinsk Seminary. Having finished the same institute a year later, Kanysh Satpayev arrived in Semipalatinsk and asked Taisiya to marry him. In this way Taisiya Koshkina forever linked her fate with him. Later the young couple moved to Kyzyl-Orda and then to Moscow.

It should be noted that it was the second marriage for Kanysh Satpayev in his life. He married for the first time at the insistence of his father, Imantay. His marriage was arranged with Sharipa, a daughter of the local elder Smagul. In 1920, they took a wedding ceremony according to Muslim traditions (called “Neke qiyar”), and a year later they had a daughter. She was given a name - Hanisa.

A coincidental encounter with Mikhail Usov, the professor of the Tomsk Technological Institute awoke in a young man a thirst for knowledge and he immediately wanted to go to study. At that moment he had no idea how much that meeting would change his life.

The marriage with Taisiya upset the elderly Imantay, there were definite tensions between Kanysh's father and his new chosen one. In spite of that fact, Taisiya always spoke about her father-in-law in high terms.

In the 20s of the last century, a systematic study of the natural resources of Qazaqstan began. From 1928 to June 1941, the Satpayev family lived in the village of Karsakpay, located in the Dzhezkazgan district of the Karaganda region. Kanysh Satpayev headed the Geological Unit of the Karsakpay plant, which was later transformed into the Dzhezkazgan Exploration Expedition. His spouse, Taisiya worked as a geological engineer, carrying out mineralogical studies of the ores of the Dzhezkazgan deposit. Thanks to efforts of Kanysh and Taisiya Satpayev, a first-class geological service, an excellent mineralogical laboratory, a photo laboratory, and an excellent mineralogical museum were organized in the Karsakpay village at that time. Research works on Dzhezkazgan ores were carried out at the highest scientific level.

In 1934, in Moscow, at a session of the USSR Academy of Sciences reports, devoted to the problems of the Greater Dzhezkazgan and outcomes of the study of the Dzhezkazgan deposit were presented. Among them was a report, prepared by Taisiya Satpayeva “On the Mineralographic Study of Dzhezkazgan Ores”, which was later published in the book “Big Dzhezkazgan”.

About her relocation to the Dzhezkazgan district, Taisiya Satpayeva in a book of memoirs writes as follows: “Looking back, me and Kanysh always come to a common understanding that the most interesting period of our lives was the period of twelve years of work on the study of geology and ore wealth of the Dzhezkazgan district. I remember that at first I did not want to go to Dzhezkazgan. Everything scared me: a demanding climate of the semi-desert, very few amenities, the remote location and its isolation from ‘civilized scientific centers’. But all sorts of unrest remained unrest, it was necessary to go. The nearest Zhusaly station was 400 km from the village of Karsakpay. It was possible to get to the destination either by camel, or by a passing truck. And the most important and pleasant thing for us was to get a two-room apartment with a kitchen, while we expected to have just a small room.”

The warmth and coziness always reigned in the Satpayevs' house. Taisiya’s mother Felitsata Vasilievna helped daughter to do household chores. She made people feel comfortable in the house. Taisiya was a very kind and softhearted person. In the great hunger years of 1930 in Qazaqstan, Kanysh Satpayev, during one of his trips to his homeland, the village of Bayanaul brought eight children of his relatives to his house in Karsakpay. At that time, they had the eldest daughter from Kanysh’s first marriage, Hanisa (having matured she became a Doctor of Medical Sciences), the one-year-old daughter, Meiz (she obtained a Doctor of Geological and Mineralogical Sciences) and Kanysh’s nephew, Kemal Akishev (he became a world famous archaeologist). The writer Aleksey Bragin, in his book “The First Academician” devoted to Kanysh Satpayev’s life path, wrote: “Kanysh and Taisiya supported a family, consisting of twelve members”. These facts demonstrate the philanthropic and noble character of Taisiya Satpayeva.

In June 1941, Kanysh Satpayev was appointed as a Director of the first Geological Institute in Qazaqstan. He brought his family to Alma-Ata. Starting from that time and until the end of her life, Taisiya Satpayeva worked at the Institute of Geological Sciences, where she headed the mineralogical laboratory. The main scientific direction of her work was the study of Dzhezkazgan ores and other deposits of the “type of copper sandstones”.

She is the author of three monographs: “Ore-forming minerals of the Dzhezkazgan deposit (composition, structure and paragenesis) (Alma-Ata. 1947), “Ore-forming minerals of the Dzhezkazgan deposit” (Alma-Ata. 1949) and “Mineralogical features of deposits, that are distinguished as copper sandstones ”(Alma-Ata. 1958). Taisiya Satpayeva described outcomes of her scientific works also in numerous scientific articles.

The first of the monographs is a thesis for the Candidate’s Degree successfully defended by her, the second monograph was prepared as a future dissertation to a Doctoral Degree. Due to her poor state of health Taisiya Satpayeva could not defend it.

A special merit of Taisiya Satpayeva is the discovery, together with S. Kalinin and E. Fain, of the presence of rhenium in Dzhezkazgan ores, for which she was awarded the Diploma of the USSR Ministry of Geology “Discoverer of the rhenium deposit in Dzhezkazgan”, 1977.

After the death of her husband, Taisiya Satpayeva, working at the Geological Institute as a consultant, focused her attention on perpetuating of memory of Kanysh Satpayev. She led the processing of his personal archive, took an active part in the preparation of the 5-volume edition of his selected works (Alma-Ata, 1967-1970), bio-bibliography (Moscow, 1982), and a collection of memoirs (Alma-Ata, 1965), in every possible way helped the museums of Kanysh Satpayev in Barnaul and Karsakpay. She conducted extensive correspondence with schools named after Kanysh Satpayev, museums, people who knew him closely during his lifetime. She devoted a lot of time to conversations with writers who wanted to describe the life of Kanysh Satpayev, the creators of the tombstone, colleagues from the USSR Academy of Sciences, the USSR Ministry of Geology.

Taisiya Satpayeva died on April 6, 1976 due to ischemic heart disease. She managed to outlast her husband by 12 years. She was buried in the Central cemetery of Almaty next to Kanysh Satpayev and their daughter Maryash, who died at 22, eight months after the death of Kanysh Satpayev.