The first laws in steppe 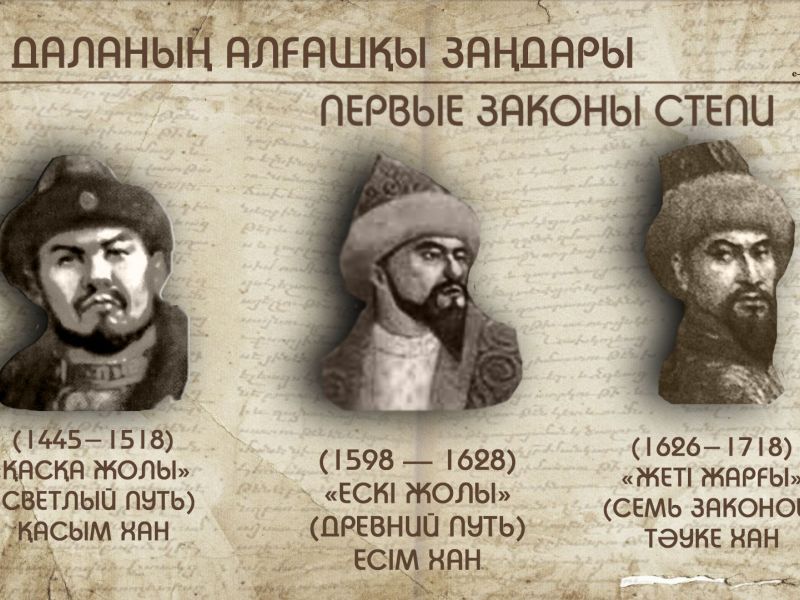 Ideas of constitutionalism in Kazakhstan stretch back far longer than a century. Such codes of the 15th — 18th centuries as «Kasym Khannyn Kaska Zholy» («Shining Path of Kasym Khan»), «Yesim Khannyn Yeski Zholy» («Ancient Path of Yesim Khan»), and «Zheti Zhargy» («Seven Codes») of Tauke Khan played crucial role in heir formation. In this regard, the Constitution of the Alash (draft) was outstanding achievement. The history of constitutional progress in Kazakhstan has five written Constitutions, including currently applied Constitution of 1995.

The history had many cases when norms of the clan system gradually transformed into the sanctioned practices. As is well known, customs in Kazakh society served the main source of law. Accordingly, legal or sanctioned custom of the Kazakhs was the basic form of law. 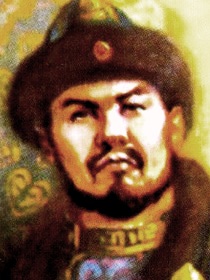 The set of laws also known as «Kasym Khannyn Kaska Zholy» («Shining Path of Kasym Khan») was worked out and promulgated in the beginning of the 16th century during the ruling of Khan Kasym. It included the following five sections:

1. The Property Law. It contained provisions on resolving disputes about land, cattle and property.

2. The Criminal Law. It considered various types of criminal offences and punishment.

3. The Military Law. It stipulated obligation to maintain army in wartime, military duty, principles of units’ establishment, division of spoils of war.

4. The Ambassadorial Custom. This section considered issues of international law and ambassadorial etiquette.

5. The Law of Community (zhurtshylyk). This section was dedicated to obligations of communities to render mutual assistance as well as to the rules of organization of celebrations and palace etiquette.

The political system described above appeared to be unstable and was based on personal authority of the ruler. His was more obviously demonstrated during the second third of the 16th century when each sultan tried to proclaim himself as khan. This was the first law in the history of Kazakhs created on the basis of national traditions and people’s wisdom.

Yesim Khan had to overcome more complicated political struggle resulted in fundamental reformation of political system of the Kazakh state. The basic aim was to replace the power of restricted elite (tore) with the domination of the opened elite (biis and foremen). This was a sort of revolution of biis (judges) restricted political power of Chingizides and established greater rights of communities and their leaders.

These changes were legally enshrined in the original code — «Yesim Khannyn Yeski Zholy» («Yesim Salgan Yeski Zholy») — «Ancient Path of Yesim Khan» («Original Path of Yesim»). It was adopted as an addition to the Code of Kasym Khan. The Law was widely recognized among people as for cattle-breeders the norms of Adat were more acceptable than the Sharia law. This legal instrument defined the authority of khan, biis and batyrs (warriors), their mutual duties and rights. In fact, this was the «Revolution of biis» because Khan restricted the power of aristocrats and relied on biis (steppe judges).

Maslikhat still had the supreme legislative power. It consisted of representatives of all Kazakh communities and more powerful sultans. Maslikhat met once a year primarily in autumn in Ulytau, Turkestan city or near Tashkent city.

Weakening of khan’s role in political system led to the change of the principle of khan’s election. Though legally the principle of meritocracy remained in force, in fact Kazakhs moved to inheritance of khan’s title until the beginning of the 18th century. In the beginning of the 17th century zhuz organization was introduced instead of ulus system. It meant that all Kazakh lands were divided between three economic and territorial units — zhuzs. Biis and leaders of more powerful and large in number group of communities were heads of zhuzs. In fact, biis of zhuzs controlled everything. They also were members of the Council of Biis which restricted the power of khan. Domination of biis was based on personal authority and khan who depended on them could not influence biis. 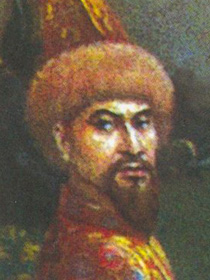 Common (tora and adat) and Muslim Law (Sharia) regulated legal interrelations in society. Kasym and Yesim made an attempt to develop a unique legal foundation. However, Khan Tauke (1680 — 1718) was more successful in this sphere. He is considered to be the author and initiator of development of «Zhety Zhargy».

The date of promulgation of these laws is unknown. It is believed that in the end of the 17th century Tauke gathered outstanding biis of three zhuzs (Tole — from the Great Zhuz, Kazybek — from the Middle Zhuz and Aiteke — from the Junior Zhuz). They were the authors of the «Seve Codes».

What were the reasons for the development of these laws?

1. To enhance internal political integrity of Kazakhs, to create Kazakh centralized state (as is known, the integrity was crucial for the struggle with Zunghar threat)

2. To develop unique legal frameworks for Kazakh society which were appropriate to current demands. «Zhety Zhargy» were kept in notes of Russian scientists G. Spassky and A. Levshin (not in full version — only 33 fragments).

According to its structure, «Zhety Zhargy» consisted of norms of administrative, criminal, civil law, family and marriage legal relations; sections about taxes, religion and so on. Tauke khan used the following principles to unite Kazakh people: principle of strict subjugation of the younger to the elder (children — to parents, wife — to husband, dependent — to ruler); principle of collective responsibility (responsibility of man towards his clan and clan towards each member). Criminal punishment was based on the principle of talion (an eye for an eye). However, death penalty (4 types) could be always replaced with redemption-fee (kun). «Zhety Zhargy» reflects social and political heterogeneity of society as revealed in the articles about different levels of responsibility of ruling individuals and common people.

The majority of population was free subject of law. Slaves depended on their owners and could be deprived of their life at the discretion of owners.

1. The Land Law (Zher Dauy) which resolved disputes about pastures and watering places.

2. The Family and Marriage Law which set up the procedures of the conclusion and dissolution of marriages, rights and duties of spouses, property rights of family members.

3. The Military Law regulated military duty, organization of units and election of commanders.

4. The Provision on Judicial Proceedings discussed the order of court examination.

5. The Criminal Law set up punishment for different offenses, except murder.

6. The Law about Kun set up punishment for murders and grievous bodily injury.

7. The Law about Widows (Zhesir Dauy) regulated property and personal rights of widows and orphans and responsibility of community and relatives of the deceased towards them.

Undoubtedly, «Zhety Zhargy» is the embodiment of achievement of medieval law. Reflecting its epoch the Code played crucial role in integration of Kazakhs.