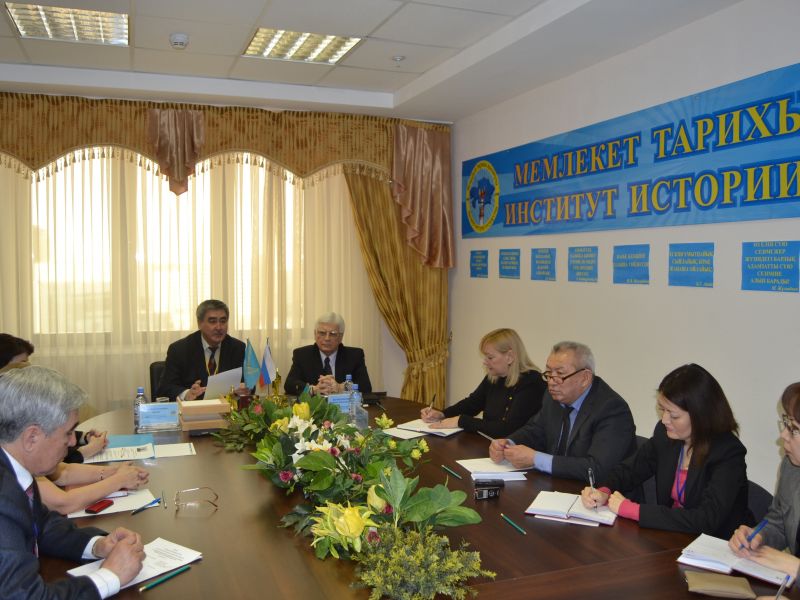 At the Institute of History of State was meeting of scientists with Extraordinary and Plenipotentiary Ambassador of Russia in the Republic of Kazakhstan M. Bocharnikov.

The meeting began with introduction of guest with Institute and its team, one of the directions of scientific activity of which is the study of the Kazakh-Russian relations, with a long history. By scientists of the Institute, during the years of its existence, was prepared and published many scientific works about this issue. They include many researches of S.Seliverstov “Kazakhstan, Russia and Turkey: on the pages of Eurasian ideas of 19-21st centuries”, B. Ayagana, A. Kashkimbayev and other. “Russia-Kazakhstan: the history of relations and modernity. Historical and textbook essay” of N. Lapin and R.Temirgaliev of “Kazakhs and Russia” and others.

Scientists of Institute have a wide experience of cooperation with Russian scientists, developing on a contractual basis with a number of Russian scientific centers of the historical profile, despite the lack of humanitarian cooperation between Kazakhstan and Russia, the necessity of which was told many times.

As Mr. Ambassador noted, that the program should include and open the principle of scientific cooperation between scientists of two countries. Humanitarian cooperation based on the system of state-based in the interests of both parties. The same view shares the first deputy director of the Institute Zh. Kydyralina, in her opinion  there are issues, for instance, social well-being of different nations living in the above mentioned nations, onomastics and others requiring discussion during the joint meetings of scientists, statesmen and public figures on both sides.

Not accidently the chat with Mr. M. Bocharnikov began with discussion on the history of relations between Kazakhstan and Russia, the chronological framework of the colonial period, contribution of our people to the victory in the Great Patriotic War, cooperation between the two countries at the present stage, the usefulness and benefits of the Customs Union. It is important to understanding not only the history of the past, but today’s story. As Mr. Ambassador noted, achievements of Independent Kazakhstan obvious — it is a fact that causes universal respect and admiration. The authority of Kazakhstan in the international area has been strengthening every year. Basing on development of Eurasian integration, the nations of our country moving to momentous event — the first Eurasian economic union.

“History is inseparable, especially the history of our peoples and states, therefore, the study of the Kazakh-Russian relations, the development of common approaches to the history of the two friendly nations should be built taking into account their long intimacy,” said Mr. Ambassador. Based on this, they proposed to the President of Russian Federation V. Putin to establish joint commission to study the history of the two nations.

During the meeting, questions concerned the modernization of history of Kazakhstan were raised, in order to bring it in line with modern requirements. As the director of the Institute, Professor B.Ayagan noted, the process of modernization gaining momentum which is clearly expressed in the opening of a number of laboratories, traveling historians in foreign archives, implementation of the “people in the flow of history”, big scientific projects.

In conclusion, Mr. Ambassador promised to assist the deepening of scientific contacts of scientists-historians of Kazakhstan and Russia, in organization of works of scientists in achieves. He expressed the readiness of Russian side to the dialogue during the seminars, in “round tables” organized by the Institute.