Home Publications A Fighter in Life

A Fighter in Life 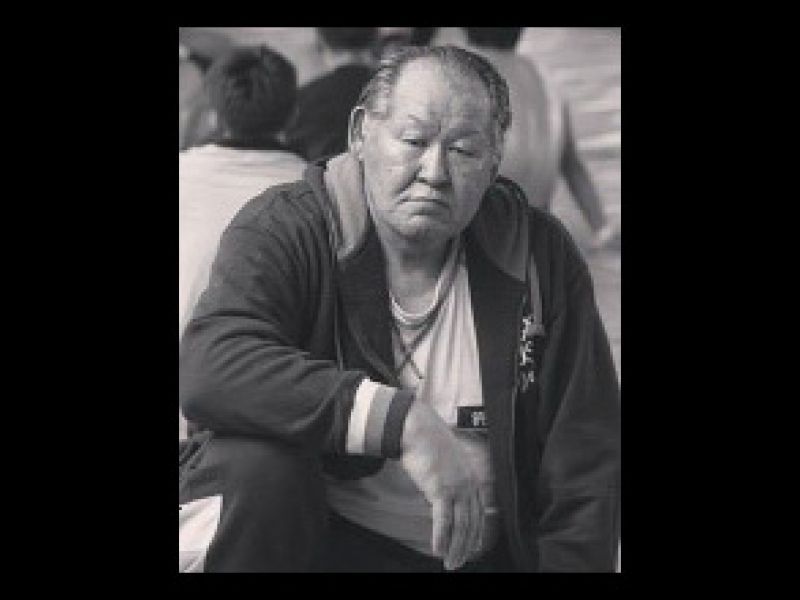 Since ancient times, wrestling was a national sport of Qazaqs, good wrestlers (“paluans” in Qazaq) were pride of the Qazaq nation.

Abilseit Aykhanov is a man - legend. Throughout his career he received numerous awards and titles. He is one of the founders of the Freestyle Wrestling school in Qazaqstan.

Abilseit Aykhanov is the first Qazaq athlete who became the champion of the Games of the Peoples of the USSR in 1963 in freestyle wrestling in Moscow, the silver medalist of the XVIII USSR Freestyle Wrestling Championship, took place in Riga in 1962, the eleven - times winner of the national championships, Master of Sports of the USSR of International Class, Honored Coach of Qazaqstan.

Between 1961-1970 he was an absolute winner in the light heavy and heavy weight categories at various competitions, held on a national level.

He received a gold medal in international competitions in Germany, Czechoslovakia, India, Japan, the United States of America, Turkey, Iran, Mongolia, Australia, Greece, Austria, the Netherlands, Great Britain, Afghanistan and other countries of the world. Thanks to his efforts, the USSR anthem was played several times in his honor.

He won such famous wrestlers as the three-time Olympic wrestling champion, the seven-time world champion Alexander Medved, the Olympic wrestling champion, the four-time world champion Alexander Ivanitsky, Bin Singh from India, Janos Reznak from Hungary, the bronze medalists of the Olympiads Bohumil Kubat and Petr Kment from Czechoslovakia, the World Cup Winner from Saint-Petersburg (at that time Leningrad) Anatoli Albul, Sasaki from Japan, G. Yilmaz from Turkey, the silver medalist of the Olympic Games Boris Kulaev, Madalnee and Liiva from Estonia.

He was an honorary citizen of the Almaty region, a holder of the Order “Badge of Honor” (an award, given to someone for his high achievements in an appropriate field). But, as it seems to me, that the highest rank was rewarded to Abilseit Aykhanov by Qazaq people, they used to call him “The Second Kazhymukan”. (There was a famous Qazaq wrestler Kazhymukan Munaitpasov who was a world champion in wrestling several times: in 1908, 1909, 1911, 1913 and 1914). 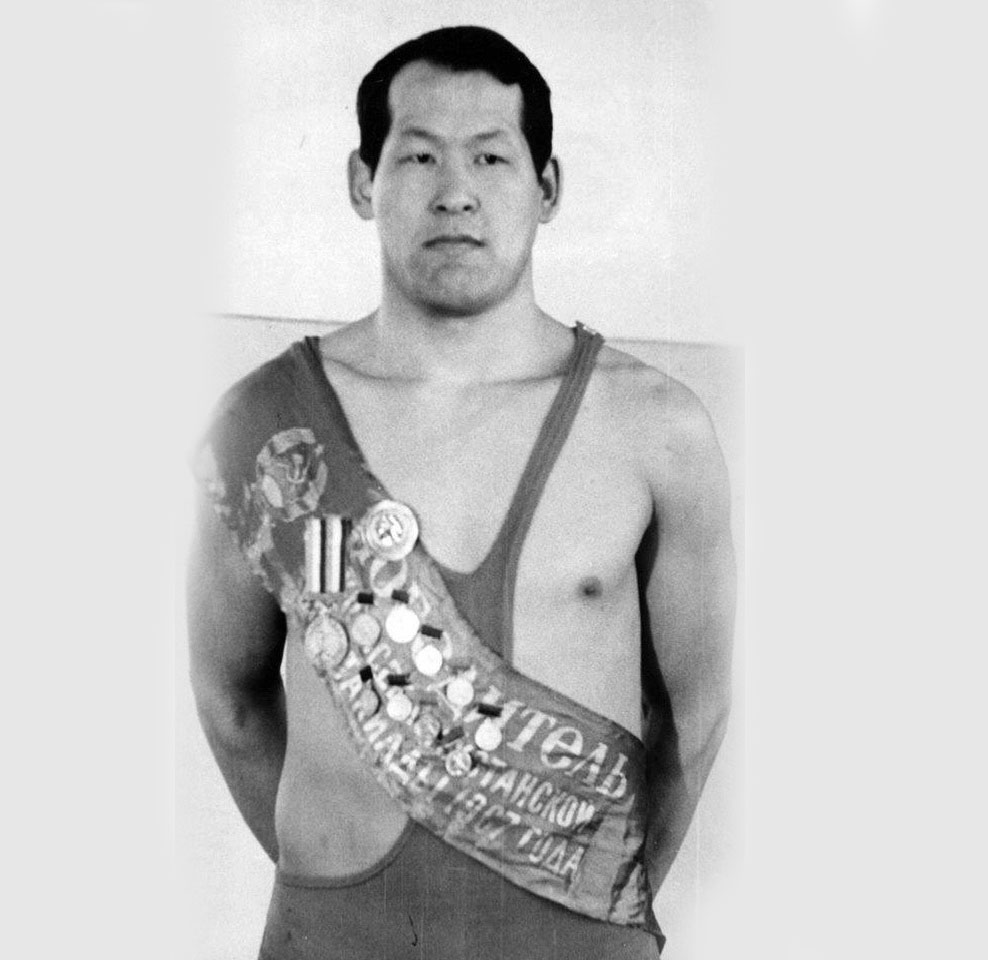 He had a huge talent. He reached unbelievable results in sport. His success raised the morale of the Qazaq people, the Qazaq youth followed his example and began seriously to get involved in wrestling. Young people started to stick to a healthy lifestyle, sought to grow up decisive and strong, as their idol Abilseit Aykhanov.

At the same time, being a coach and mentor, he educated and raised many famous athletes at home and abroad. Abilseit Aykhanov for several years headed the National Team of Afghanistan. It was not easy for him in a war-ridden country to unite in one team Tajiks and Pashtuns. The fruit of his successful work in Afghanistan was the training of four international-class masters of sports and two dozen prize-winners of big tournaments. His Qazaqstani disciples are Master of Sports of International Class A.Bugubayev, Master of Sports Zh.Kopebaev, N.Nurmanov, A.Musabekov.

Abilseit Aykhanov was born on April 15, 1938 in the village “Pokatilovka” in the Sarkand district of the Alma-Ata region. There were six children in the family, four boys and two girls. His mother inspired him to go for wrestling.

According to Abilseit Aykhanov, he got into a wrestling by accident. In one of his interviews, he says that he came to Almaty in 1957 to enroll in a Physical Education Institute, although school teachers, knowing about his abilities, advised him to enter the Faculty of Physics and Mathematics. But he believed that health is more important than mathematics and decided to go for sports. The matter was that he did not know exactly what kind of sport he would like to practice. At school, he was engaged in skiing and acrobatics, upon his arrival to Almaty he decided to enter the Wrestling Department. But all he knew about wrestling was a feature film about Ilya Gromov, called “The World Champion”, shot in 1954 (the movie tells a story about a guy who was an ordinary blacksmith in a small place and became a world champion in freestyle wrestling thanks to his efforts and strong belief). He even knew nothing about admission requirements for freshmen, applying for the Wrestling Department. When he came to apply for admission, the staff of the selection committee looked at him in surprise and sent him home. Young man was confused and without thinking twice decided to enter the Skiing Department, in view of the fact that he had a third category in this kind of sport. However, when he passed the exam on General Physical Training, the coaches noticed in him something: with his height of 190 cm he could do somersaults. So they offered him to play basketball, which at that time was very popular in Almaty.

“But how did you find yourself among freestyle wrestlers?”, asked him a journalist. Abilseit Aykhanov replied: “It happened by accident. In the hostel I was given lodging with the wrestlers. Once at the championship of Alma-Ata (an old name of Almaty) in “Qazaq Kuresi” (the national kind of wrestling) there were not enough heavyweights. They called me, although I weighed only 74 kg, but I needed at least 87 kg. Two days I ate tirelessly and at last I gained 85 kg. Before weighing, I drank a lot of water, as a result I was somehow admitted to the tournament. It was my first competition, I got acquainted with the rules of the wrestling already at the place. Nevertheless, I reached the final round and took out the second place. After a tournament my future coach Peter Matuschak invited me to visit him next day. So I started my training with him. At the beginning at sparring matches I lost fights for wrestlers, who weighed 52 kg. But I was not ashamed of it. On the contrary, I worked even harder. A year later, I went to the USSR Championship in Tbilisi, where the wrestling carpets were spread right on the football field, and the stands of the stadium were overcrowded. Having the second grade in freestyle wrestling, I totally immobilized two Masters of Sports - one was from Georgia and the other was from Armenia”. At this championship Abilseit Aykhanov won even the USSR champion Khrestyuk. His success surprised very much the administration of the Federation of Freestyle Wrestling.  A year later, in the Soviet championship in Minsk, everyone was in shock, when Abilseit Aykhanov furiously smashed one opponent after another. After that championship he was included into the National Team of the USSR.

At the international tournament in Czechoslovakia Abilseyt Aykhanov performed very well. He defeated wrestlers whose weight exceeded 140 kilograms. The reward for hard work was the second place. Alexey Gatulin, the national team coach, even shed a tear of happiness. Later Abilseit Aykhanov became the second prize-winner of the Soviet Union, and then the winner of similar competitions.

On April 17, 1962, in the newspaper “Sovetsky Sport”, experts wrote about him in the article like this: “Thanks to his natural body shape (tall, long arms), Abilseit Aykhanov creates not only spectacular but unusual situations on the carpet, and he always wins”.

Abilseit Aykhanov always believed that the technique and tactics in freestyle wrestling should be learned as an alphabet, and for a concrete victory you should choose your best weapon, honed by years of training. During the attacks, he had chosen unfavorable for his opponents positions and by his dynamical actions suppressed the opponents' attempts to do something.

His tactics and skills made him a legend. Tall, strong, not loving hypocrites and sycophants, he always spoke the truth. Because of his character he was not taken to the Olympic Games in Tokyo (1972). Although the wrestler from Qazaqstan won in test sparring matches with his main opponents in the USSR national team: Alexander Ivanitsky and Alexander Medved. He was told, that he won his opponents, but his weight did not allow him to present USSR in the first turn, and he was left in reserve.

He took offence at that remark, packed up and left. At home, he announced his retirement (1971) and became a coach. He trained a National Team of Qazaqstan. 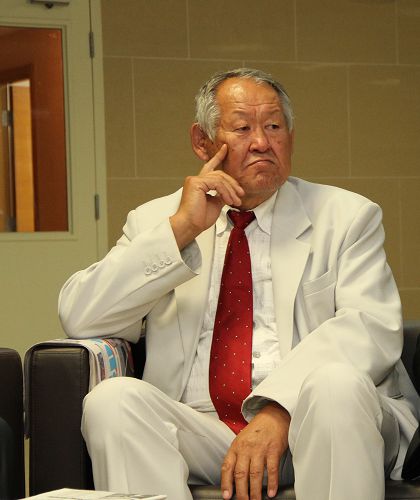 Abilseit Aykhanov did not consider himself especially gifted by God. He suggested, that everything he had been given from above, he developed and brought to perfection. Such qualities he wanted to see in today's masters of freestyle wrestling.

He did a masterful job in everything. He headed the Republican Federation of national kind of wrestling called “Qazaq Kuresi”. He drastically changed the work of the Federation, he revised the rules of the wrestling, returned to this kind of sport a spirit of entertainment and dynamism. In addition, he was a member of the National Olympic Committee of Qazaqstan, one of the most insightful, engaging and authentic speakers at the sessions and plenary sessions of the NOC.

As a final goal of his efforts, Abilseit Aykhanov saw in returning the interest of Qazaq people to the national kind of wrestling “Qazaq Kuresi”, which is very close to “sambo”.

In 1993, Abilseit Aykhanov was nominated as a candidate for people's deputies of the Republic of Qazaqstan from the Alakol electoral district of the Taldykorgan region.

The legendary wrestler of international class, Abilseit Aykhanov, died on March 6, 2016, at the age of 78.