Home Publications My Country is My Life

My Country is My Life 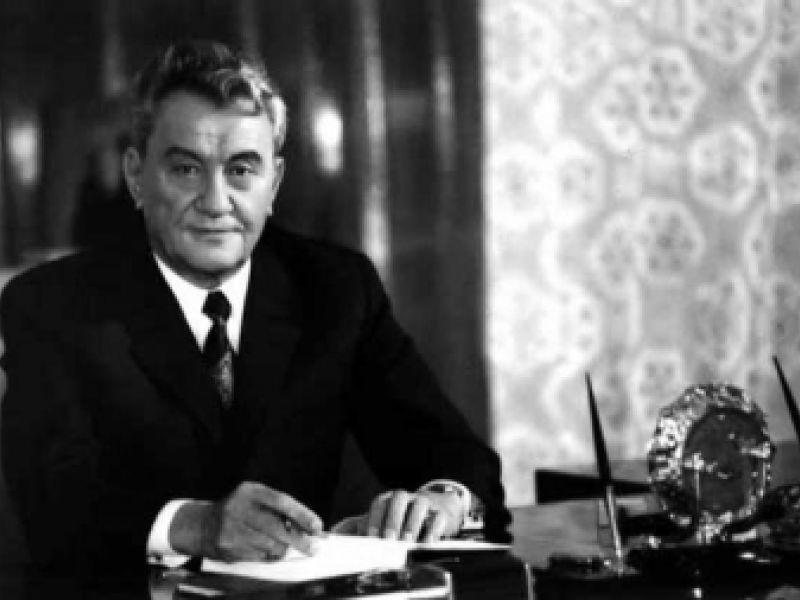 An article about Dinmukhamed Kunaev, an effective leader of the Qazaq Soviet Socialist Republic for more than two decades

This year marks the 107th anniversary of a prominent Qazaqstani political figure of the Soviet epoch Dinmukhamed Kunaev’s birth.

Historians express different views on input made by Dinmukhamed Kunaev during his reign in Qazaqstan. Some people are used to say about a big economic growth of the country, when the Qazaq Soviet Socialist Republic turned into a leading economical hub of the USSR. At the same time there are people, who accuse him of excessively large expenditures on the development of Almaty.

Dinmukhamed Kunaev was known for his noble nature. He was a person of high moral integrity and strategic thinking.

He was born in the city of Verny (now it is the city of Almaty, the former capital of Qazaqstan) on January 12, 1912. The father of Dinmukhamed Kunaev, Minliakhmed Kunaev worked at agricultural enterprises of the city of Verny, was literate and spoke well in Qazaq and Russian languages, and his mother, Zaure Shynbolatova was born in 1888 in a peasant family in the village of Chilik of Chilik district.

In 1931, a District Committee of the Komsomol gave him a document, on the basis of which he could apply for admission to the Moscow Institute of Non-Ferrous Metals and Gold. Five years later, Dinmukhamed Kunaev with a Master degree in Mining Engineering was sent for work to Balkhash (Qazaqstan). He started his career as a foreman of one of the major mines of Qazaqstan.

Dinmukhamed Kunaev said in one of his interviews that he wanted to become a mining engineer from his childhood, because at that time it was an extremely rare profession among Qazaq people and it was very important one in the context of economic growth of the country. 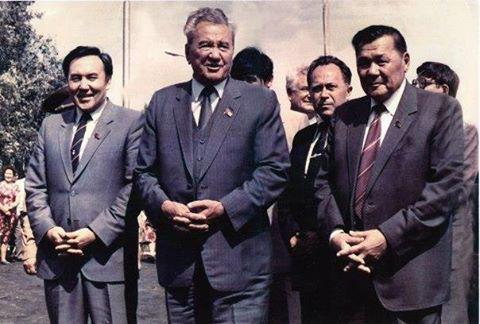 He demonstrated his strong organizational skills at work. Within four years he was appointed as a Director of the ‘Altaypolimetal’ Rudnensky Integrated Industrial Complex. He was sent to all the important mines and factories that appeared on the territory of Qazaqstan during that historical period. It was a time of rise and development of mining industry in Qazaqstan.

He was a sagaсious manager. He used to resolve a lot of key issues of the mining industry with the help of strengthening the link between production and science. Dinmukhamed Kunaev is known as a party and state leader to a wide circle of people, but he was also a prominent scientist, a Doctor of science, an Academician.

A lot of people, who knew him in person say that Dinmukhamed Kunaev was a very modest person and even went to work on foot. At that time, almost all people lived alike, they did not have private property. Dinmukhamed Kunaev lived all his life with his wife in an official housing, which was located in Almaty at the corner of Kirov Street and Kommunistichesky Avenue (now they are called Bogenbai Batyr avenue and Abylay Khan avenue). They had no children. Their country house and car were also temporarily owned.

Dinmukhamed Kunaev was a great diplomat. The Soviet leadership often sent him to the most difficult negotiations on international affairs: for example, he headed the Soviet delegation at the negotiations with Mao Zedong, Gamal Abdel Nasser. He met with the leaders of Ethiopia and North Korea, Mengistu Haile Mariam and Kim Il Sung.

In 1955, Dinmukhamed Kunaev for the first time in Qazaq history hosted the high-level international guests: the first Prime Minister of India Jawaharlal Nehru and his daughter Indira, Burma’s Prime Minister U Nu.

On July 31, 1956, Dinmukhamed Kunaev, as a member of the USSR parliamentary delegation, visited the United Kingdom, met with Winston Churchill and Queen Elizabeth II in Buckingham Palace. 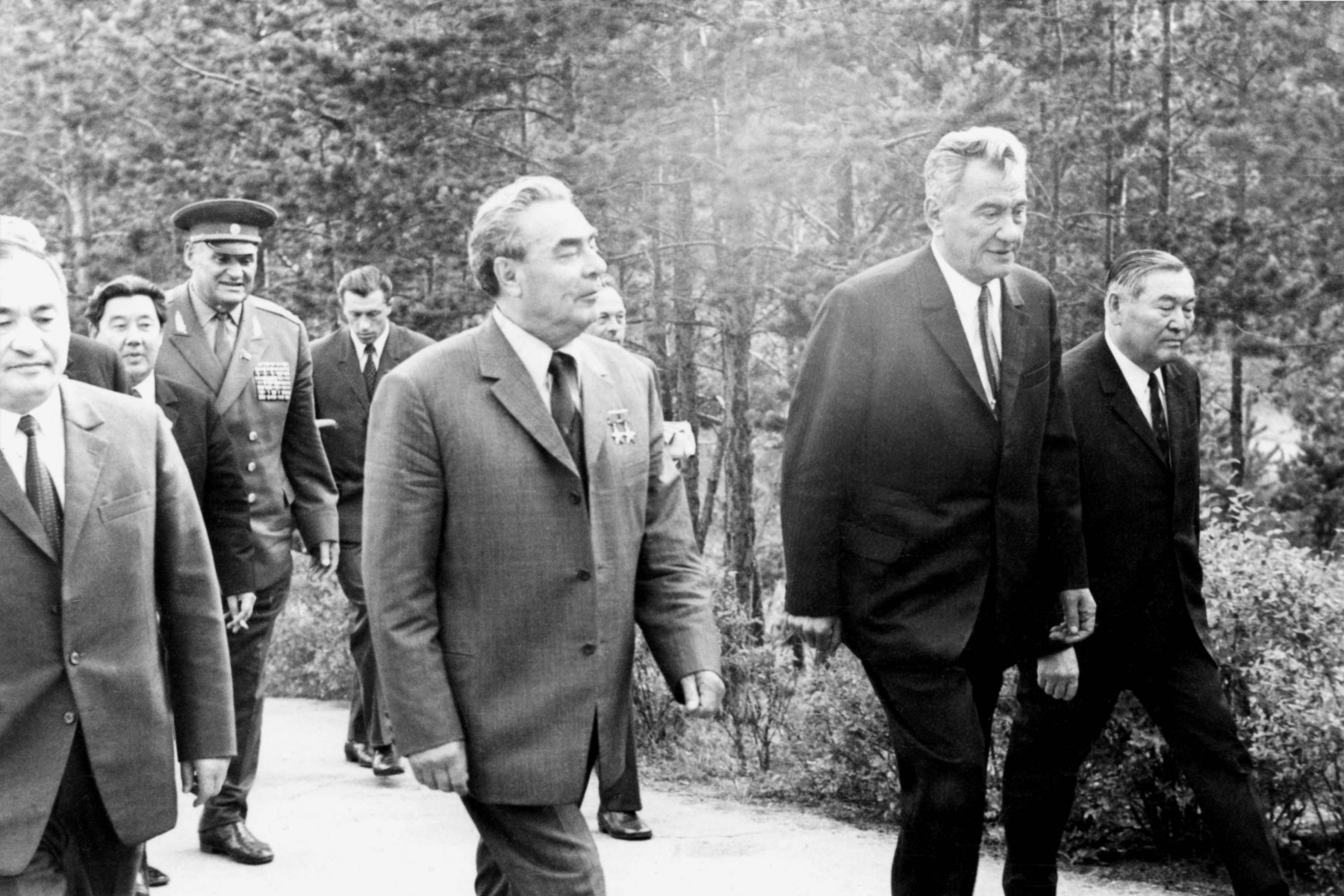 He decided to transfer the territories of some of the Union Republics to others for rational use. In this way the RSFSR handed over the Crimea to the Ukrainian SSR, and the KazSSR was supposed to hand over a region called the ‘Tselinny Krai’, occupying 21% of the area of Qazaqstan, to the RSFSR, the cotton-growing areas of the South Qazaqstan region were to be transferred to the UzSSR, and rich for oil Mangyshlak (a large peninsula located in western Qazaqstan) was supposed to be given to the Turkmen SSR.

The leadership of Qazaq Soviet Socialist Republic was opposed to the Moscow’s proposal. First, Zhumabek Tashenov was dismissed from his post of a Chairman of the Council of Ministers of the Qazaq SSR, and after him Dinmukhamed Kunaev, who took his post.

For a position of the First Secretary of the Central Committee of the Communist Party of Qazaqstan was appointed loyal to Nikita Khrushchev, Ismail Yusupov. But it did not last long, since, as soon as Leonid Brezhnev became a leader of the Soviet Union, Dinmukhamed Kunaev was again appointed to the highest post of Qazaqstan.

In general, Dinmukhamed Kunaev came to the post of the First Secretary of the Central Committee of the Communist Party of Qazaqstan twice. The first time he was appointed to this position in 1960 and resigned in 1962, the second time he came to this post in 1964 and stepped down only in 1986.

Most of the amazing buildings of Almaty, existing by now, were built under guidance of Dinmukhamed Kunaev. They are: the Palace of the Republic, a campus of the Al-Farabi Qazaq National University, Arasan, the ‘Medeu’ outdoor speed skating and bandy rink.

When 55-year-old Mikhail Gorbachev came to power, he introduced the policies of glasnost and perestroika. He attempted to revitalize the Soviet Union. It required substantial personal changes in the party and state apparatus.

In February-March 1986, Dinmukhamed Kunaev tendered his resignation from his functions as the First Secretary of the Central Committee of the Communist Party of Qazaqstan.

Mikhail Gorbachev accepted his resignation. By the end of the year, on December 16, 1986, during the plenum of the Central Committee of Qazaqstan, Dinmukhamed Kunaev relinquished his post to Gennady Kolbin, who headed the Ulyanovsk Regional Committee of the Communist Party of the Soviet Union at that time.

The change of power in the Qazaq SSR led to unrest, which would later be called the ‘December events in Alma-Ata’ or ‘Zheltoksan’. The participants in the peaceful rally demanded that the first secretary be a representative of indigenous ethnicity, but military units were sent to suppress the rally.

Dinmukhamed Kunaev was accused of organizing unrests. He was interrogated in cases of embezzlement and misappropriation of property, but nothing was confirmed. After his resignation Dinmukhamed Kunaev lived in Almaty.

He died on the evening of August 22, 1993 in the village of Akshi of the Alakol district of Almaty region. He had a heart attack.