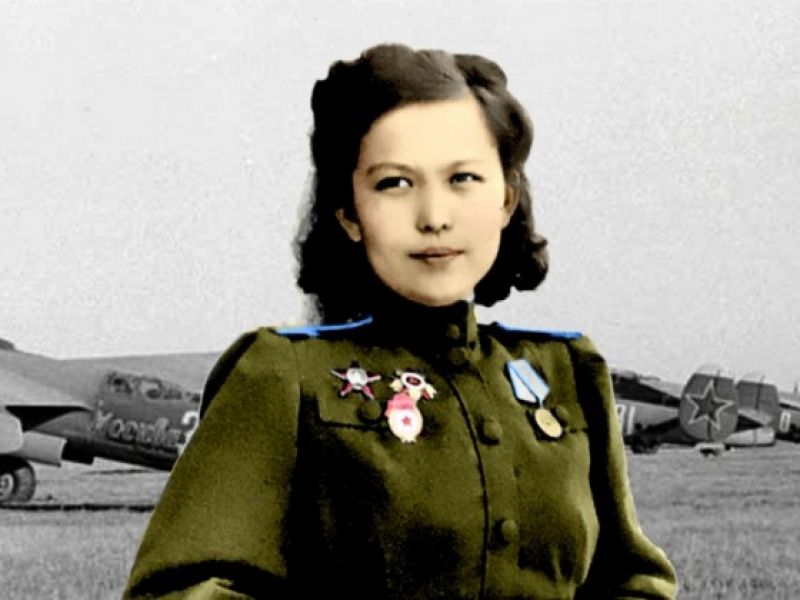 Today marks the birthday of Khiuaz Dospanova, the veteran of the World War, Khalyk Kaharmany, who was born May 15, 1922, in the village of Ganyushkino and passed away on May 20, 2008, in Almaty city

It was an extremely turbulent moment when the majority of the young people wanted to explore the sky, with young boys eager to become pilots like Chkalov. Khiuaz used to say: "Of course, we knew that Chkalov was a unique person, and for us, young girls, he was a person that we thought we would never get to see. But when three friends - Valentina, Polina and Marina made a non-stop flight through the whole country, from Moscow to Vladivostok, I was dawned: that's the one from whom you need to take an example, so you and girls can dream of the pilot's feat!". As you know, not everyone’s dreams come true. Pilots need perseverance, firm character and Khiuaz Dospanova had all these qualities instilled in her early on. One day she expressed her desire to her parents to be trained as a pilot. Thus, she got their consent.

Khiuaz did well at high school and was one of the best activists - the Pioneer leader and also the secretary of the Komsomol organization of the school. In the summer of 1940, she successfully graduated from the tenth class and the flying club. She had two precious documents - a certificate full of highest grades, with which she could easily be enrolled at least in MSU without exams, and a pilot's certificate. But Khiuaz did not go somewhere, but directly to the Air Force Academy named after Zhukovsky. However, she received a polite but firm refusal. It was a defeat, a blow to dreams and plans.

She did not go back to Kazakhstan but applied to the First Moscow Medical Institute. After almost a year, she began the summer exam session of the first year. But before she finished, he was already started! Hiuaz learned that the glorious pilot and her personal ideal - Hero of the Soviet Union Marina Raskova was seeking permission to form a women's aviation regiment to participate in military operations on the fronts of the war. Khiuaz realized that this was the same sign of fate that she had vaguely expected for months. As soon as the radio broadcast a message about the actions of Raskova, Khiuaz runs to the Central Committee of the Komsomol. And ... submits an application.

In the spring of 1942, the graduates were given the first combat missions of a regiment of light bombers.

They were accepted to the front without much desire, they looked at the women's regiment with irony and mistrust. However, they coped, although the war before the air regiment required no female tasks. It was necessary to drop bombs at a low altitude, that was for certain. Hitler's propaganda spread rumours that the regiment consisted of released "zeks", which had to redeem their guilt and therefore were not afraid of death. They called them "night witches." And in the leaflets with an appeal to surrender necessarily put caricatures of witches with a tail. And after all, young girls of 17-20 years old rose up in the air, the youth of which was seared by war, and they, forgetting everything, at the behest of their hot hearts rose up to defend their homeland. Many perished, without having enjoyed marriage and the joy of motherhood.

The ‘winged’ hero of Kazakhstan, a navigator-shooter of the 588th-night bomber aviation regiment Khiuaz Dospanova had more than 300 sorties throughout her life as a pilot. A former commander of the squadron and a Hero of the Soviet Union Marina Chechneva dedicated fifteen pages to Khiuaz in her book entitled "Fighting friends". There are, in particular, such words about her navigational skills: "Dospanova always unmistakably displayed her aircraft on the target and also just went out to her airfield." Khiuaz performed combat missions on the Southern Front, the Northern Caucasus, Transcaucasia, Ukraine and Belarus. For her bravery during the World War II, she was awarded the Order of the Red Star, the Patriotic War II degree, the Red Banner, medals such as "For the defence of the Caucasus", "For the liberation of Warsaw", "For victory over Germany" and other military awards.

In the battles in the Caucasus, Khiuaz was wounded for the first time and after spending a month in a hospital, she returned to the unit.

And then there happened a terrible fight, in which her counterpart friend died, and she received numerous fractures. For several days and nights, doctors fought for her life, and even the amputation of her feet was brought up. She firmly believed that she would fly again. Bones fused incorrectly, they were again broken. 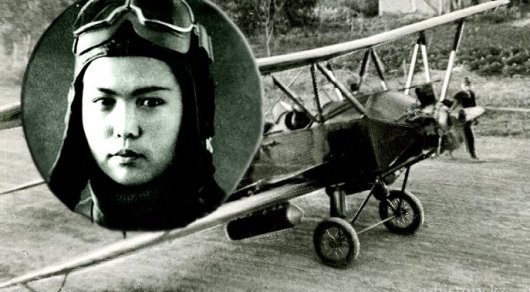 Lathed and patched up, she again reached the cockpit. She was dissuaded but she insisted. Brave-hearted Khiuaz was appointed as the navigator of the link. She reported about her performance without leaving the navigational chair - she never let herself relax. Sometimes Dospanova stayed overnight on the plane, so as not to get out of the cabin while receiving a new assignment.

But legs caused serious concerns. The command realized that if the plane was damaged, the navigator Dospanova, even if survived, would not get to her own. Therefore, she was offered to go to the headquarters of the communications chief of the regiment. In a new capacity, along with the regiment, she took part in battles on the 2nd Belarusian Front.

46th Guards night bombardment of the air regiment went through a thorny combat path and was awarded the Order of the Red Banner and Suvorov III degree. For his participation in the liberation of the Taman Peninsula, he earned the honorary title of Tamansky. An essay on the "winged girl" with the unusual name Khiuaz appeared in the front page of the newspaper. Her name was frequently mentioned among the sons and daughters who glorified Kazakhstan on the fronts of the World War II.

Glorious pilots welcomed victory near Berlin. The girls barely had time to go to the defeated city and sign on the walls of the Reichstag, as the order came to disband the air regiment. Front commander Marshal Rokossovsky personally read out the order of the Supreme Headquarters of the Supreme Command and heartily thanked the girls for serving the Fatherland. From the war, Khiuaz Dospanova returned as a disabled group II, but, despite this, she actively participated in public life. She had a long path from the instructor of a district committee of a party in native West Kazakhstan to the secretary of Central Committee of the Young Communist League of Kazakhstan. In 1951, she was elected a deputy of the Supreme Council of the Kazakh SSR and at the first session - secretary of the Presidium. Prior to her retirement, Khiuaz Dospanova was a secretary of the Alma-Ata Party Committee, taking an active part in the life of the capital. She was the second secretary of the Alma-Ata City Party Committee. According to the memoirs of the then colleagues, former fearless warrior Dospanova demonstrated her strong character even though she was retired. She was a true example of openness, frankness and adherence to strong principles. Due to her character, she enjoyed the sincere respect of others.

Unfortunately, in the late 1950s, they let themselves know about the consequences of front wounds and contusions. The health condition of Khiuaz was noticeably deteriorating. Khiuaz Dospanova, along with her husband Shaku Amirov, raised a son and grandchildren. As a very humble person, she did not claim anything, she did not demand anything.

Leonid Batluk, himself a former pilot in the newspaper Soviets of Kazakhstan, wrote: "In Russia, the last surviving seven pilots from the regiment Raskova, the president conferred the title of Hero of Russia, and it would be fair to do the same with respect to Khiuaz Dospanova in Kazakhstan. The idea had found a response in society. In her support, many prominent figures of the country stood up. "Kazakhstanskaya Pravda" published an article with a proposal worthy of celebrating the merits of the glorious pilot - to give her the title of Khalyk Kakharmany. A Presidential Decree was released. On December 7, 2004, by the Decree of the President of Kazakhstan, Khiuaz Dospanova was awarded the title of "Khalyk Kaharmany ("People's Hero") with the awarding of the sign of a special distinction - the Golden Star and the Order of Otan. Nursultan Nazarbayev reminded all of us that the commitment to the principle of "Nobody is forgotten, nothing is forgotten" was still in place, and that it should be cherished in our society.