QUESTION ABOUT CULTURAL AUTONOMY OF KYRGYZ 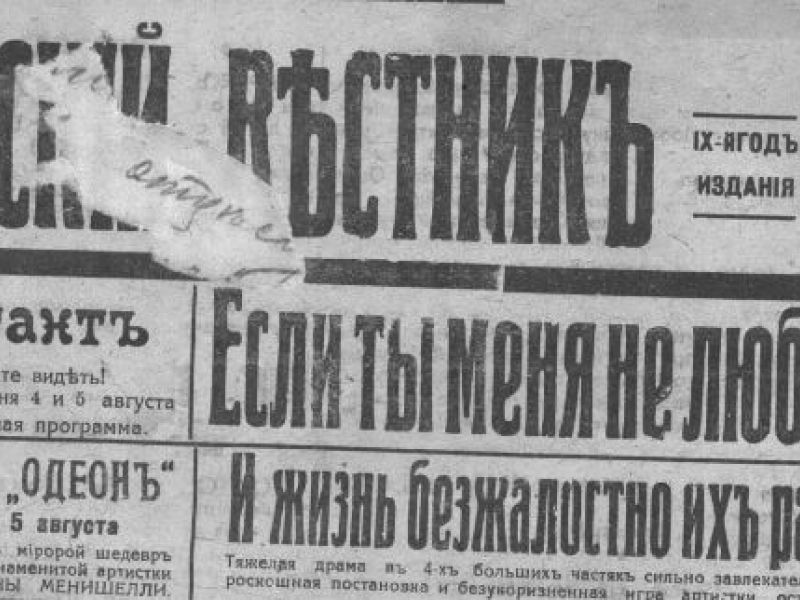 "Kyrgyz". Under this name in the Omsk newspaper "Siberian Herald" as of July 30, 1918 a message was published with the mention of Alash-Orda and Alikhan Bukeikhanov

“The Council of Ministers established a commission to consider the issue of the cultural autonomy of the Kyrgyz under the chairmanship of the Minister of indigenous affairs Shatilov with the participation of professor Sapozhnikov as deputy to Comrade Minister of Internal Affairs P.N. Mikhaylov, who is in charge of the resettlement department of Yermosh and a representative of the military department. A leader of the Alash Orda Alikhan Bukeikhanov was brought to the commission as its head.”

A small note in a newspaper almost a hundred years ago pushed us to search for answers to many questions: What kind of commission was created by the Council of Ministers? What questions did thet discuss? In which capacity was Alikhan Bukeikhanov invited? What decision was made with respect to Alash-Orda?

Since the formation of the II All-Kazakh Congress in December 1917, the leaders of the Kazakh intelligentsia have faced the most important question: the official recognition of the Kazakh national autonomy. Soon, Alash-Orda began work on establishing relations with the Provisional Siberian Government.

The Siberian government did not presuppose the independence of the Alash-Orda; as a result the relationship between the governing bodies acquired a tense character.

In the "Basic Provisions on the Boundaries of the Cultural Autonomy of the Nationalities of Siberia" published in July, the question of territorial and political autonomy was redirected to the All-Russian Constituent Assembly. This served as the basis for the Siberian government in the non-recognition of the Alash-Orda as the organ of the national-territorial statehood of the Kazakhs. Alash-Orda took measures to establish legal relations and recognize autonomy.

July 10, 1918, A. Yermekov conveyed to the Council of Ministers a note in which, while welcoming the fall of the Bolshevik regime, Alash-Orda called for the unification of efforts to protect the gains of the February revolution "which gave rise to a political revival of the peoples and suburbs of Russia." In the draft agreement proposed by Alash-Orda, the Siberian government had to recognize the national autonomy of Alash, establish borders with the opinion of the population.

1) The Siberian government will exchange mutual recognition with the Alash autonomy.

2) Before the determination of the will of the Russian population in the territory of Alash and the establishment of its borders, considering the demand of the moment, Alash-Orda finds it possible to:

a) Preserve in its present form all mixed institutions: zemstvo, city Dumas under the control of commissars appointed by agreement of the Siberian government and Alash-Orda;

b) The temporary subordination of state and mixed institutions, departments and local governments to the orders of the Siberian government, with the participation of the Alash-Orda representative in resolving the issue;

c) Appointment to responsible positions within the autonomy of Alash should be with the consent of Alash-Orda.

3) Before designing the power recognized by all nationalities of the Alash territory, Alash-Orda is the authority of the Cossack-Kyrgyz people. All national public organizations and institutions are subordinate only to Alash-Orda. It has the right of special taxation, collecting a kibitka pay in its coffers. Alash-Orda organizes national courts, local councils of Alash-Orda, which are in charge of all the national affairs of the Cossack-Kirghiz people, which remain outside the competence of the restored zemstvo and city Dumas.

4) Creation of a national Kazakh army. The organization of the army can and must be carried out only on the initiative of Alash-Orda. The army will be completed territorially and nationally with submission during the war together with the troops of the provisional Siberian government to the general command. The Siberian government must provide the army with weapons, equipment, food and military instructors. The Kazakh army, as a special military unit, should enjoy independent economic and internal management and in all subordinate to the military department of Alash-Orda and its main headquarters. Alash-Orda considers its first task to be cleansing from the Bolshevik gangs of the territory of Alash and rendering assistance to Turkestan and Semirechye.

5) In view of the fact that state banks and other financial institutions within the territory of the Alash autonomy are subordinated to the provisional Siberian government, the need for the Siberian government to provide loans to Alash-Orda.

6) The need to convene in the near future a congress of deputies of autonomous peoples and suburbs cleared of the Bolsheviks in order to create a federal power that will undoubtedly rally the still disparate parts of Russia, weld them with strong cement and raise its strength and power to protect the interests of the Union as from internal, and from external enemies, in this respect, the possibility of a federation of Siberia, Alash, Bashkiria and Turkestan appears in the near future. 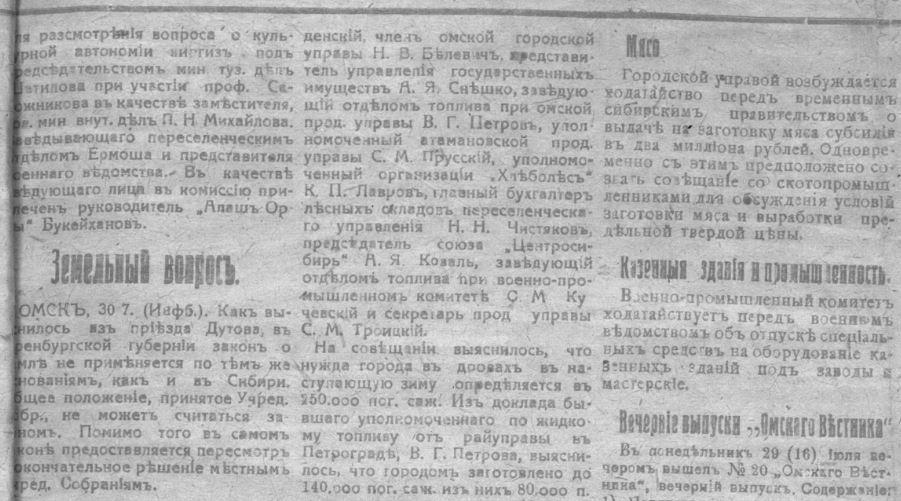 July 26, 1918, the Council of Ministers of the Siberian Government considered the memorandum of Alash-Orda with the draft agreement on mutual recognition. Commission under the leadership of the Minister of Education professor V.V. Sapozhnikov discussed the points of the draft agreement.

The clause on mutual recognition was withdrawn from discussion.

The clause about the order of management and activity of bodies of Alash-Orda is preserved.

The issue of granting the loan was redirected to the Ministry of Finance, as well as the issue of the establishment of a national army was transferred to the military department.

The land question on the Semipalatinsk, Akmola and Turgay oblasts was postponed to the All-Russian Constituent Assembly.

A special opinion was expressed by the representative of the Ministry of Agriculture and Colonization A.M. Yarosh. He noted the uncertainty of the "nature of the political structure of the Kyrgyz people and the essence of their state-legal relations to the Russian statehood and autonomous Siberia," which could lead to aggravation of relations in the future. The situation required the adoption of at least temporary legislative norms instead of invalid laws on the situation of the region in the Russian Empire.

It is worth noting that the draft agreement, proposed by the leaders of Alash-Orda, has not gained legal force.