Home Publications AS NICHOLAS II SIGNED HIS OWN SENTENCE

AS NICHOLAS II SIGNED HIS OWN SENTENCE 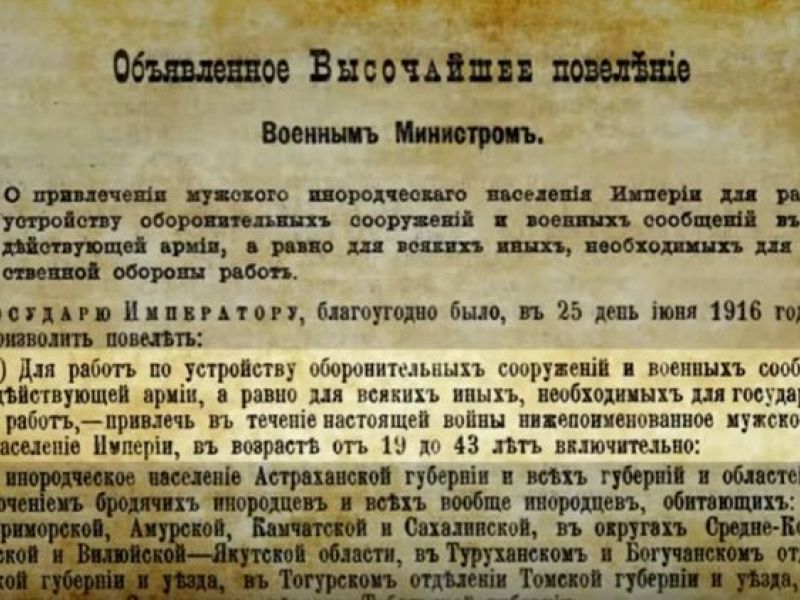 If Nicholas II had not signed the Decree of June 25, 1916, he would not have had to withdraw troops from the front to suppress the uprising and history would have gone the other way?

About the last monarch of the Russian state who was real key personality is written a lot: the crown of the Romanov dynasty, which ruled 300 years, when Russia ignominiously lost the war of Japan, entered the First World War, passed through revolutions and reactions, took democratic steps in the form of the State Duma, tried to implement large-scale industrial projects, but remained, in fact, a large village. Rasputin comes to mind, and the tragic death of the Romanov family. All and can not fit in one article, thick monographs and hundreds of memories have already been written about this, many conferences have been held. But it's not about that. Against the backdrop of all the events and processes of the early twentieth century, today, on the day of the adoption of the decree of June 25, 1916, we would like to highlight the role of this document in the fall of the Romanov regime. They say history has no subjunctive mood. If it was so, or else …

The First World War squeezed out of Russia all the reserves and at some point it was decided to use the last resource - the alien population. What did this lead to? It led to the powerful, unpredictable uprising of 1916, embracing the practical all the Asian suburbs of the Empire. Of course, the causes of the uprising are much deeper, and the Decree served as only an excuse. The suppression of the uprising had to be abandoned by regular troops, thus weakening the front. The uprising developed into a national liberation movement against the tsar's colonial policy. Losses at the front, low morale, growth of national self-consciousness put pressure on the regime, and Nicholas could not stand it. In February 1917, he lost power, and in July 1918 - life. Without this Decree, Nicholas II probably ended the war with a brilliant victory, but ...

In the First World War, the Russian Empire entered in 1914. For Russia it was a very difficult war. It can not be said that the Russian Empire was ready for it. It was a whole series of heavy defeats on the German front, which could not compensate for individual successes on the Austro-Hungarian and Turkish fronts. Already at the very beginning of the war it was found out that in Russia there are not enough stocks of shells, cartridges, rifles, not enough heavy artillery. There was nothing to arm millions of ordinary peasants who had to be mobilized, including compensating for the heavy losses of the first period of the war. 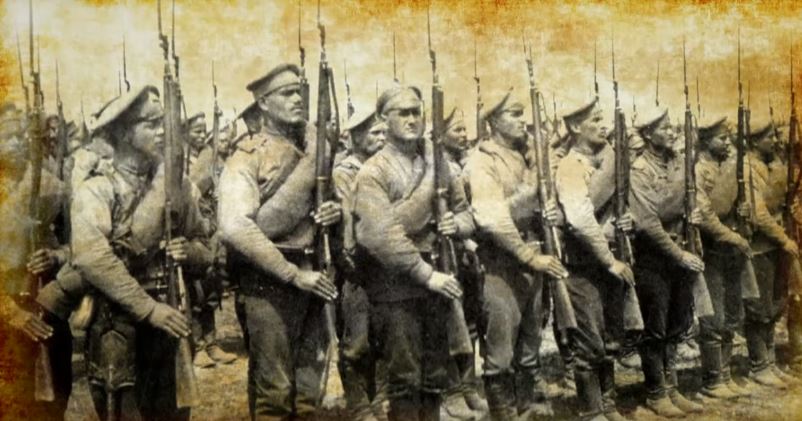 In October 1914, the Minister of Finance submitted to the Council of Ministers a draft law on the introduction of a military tax on persons released from military service. The law on the establishment of a military tax entered into force on January 1, 1915. For the entire population of the Turkestan Territory, the tax was to be levied at a rate of 21% of all types of direct taxes. Taxes have grown: the supply of meat and livestock, a fee from kibitka and zemstvo. Kazakhs gave to the front cattle, meat, yurts. It was not easy for them, and the imposed military tax became one heavier burden on the neck of the common people. For military needs, 1 million sheep were taken from the population from the Syrdarya and Semirechye regions in 1914. The area under crops for peasants, the number of cattle for nomads decreased. All this caused a negative reaction of the local population. "The need is growing, and with it the discontent of the population, which can lead to open excitement," it was noted in the reports of the gendarmerie.

The Russian population of Turkestan region was called to urgently join the army. By the beginning of 1915, more than 100,000 people had been drafted from the region into the army. Mobilization to the front significantly weakened the state's labor resources.

In 1915, the Russian Empire suffered a heavy defeat, losing Poland, Lithuania and Galicia. In total, 15% of the country's territory was lost. The losses of 1915 reached 1.5 million killed, wounded and captured. According to the recognition of the famous general Brussilov, in 1915 the personnel Russian army was actually destroyed. During the entire war, Russia lost 2.2 million killed, 2.5 million were taken prisoner, and millions more people were wounded.

In order to make up for the heavy losses, the Russian authorities called for more and more people, mostly peasants. As a result, the resources for mobilizing the Russian provinces of the empire were soon exhausted. In total, 16 million people were called up for the First World War in the Russian Empire. In addition, the peasant farms depended on the availability of labor. Therefore, the village was in an increasingly difficult situation. And, finally, in the Russian Empire, there were not enough workers to build important facilities.

In this situation, an idea arose to attract workers from the eastern provinces of Russia to the rear work who, according to the law, were exempt from military service. In fact, the Russian authorities needed free labor in the war. At the same time, it was feared to take Asians and Caucasians into the army in the Russian Empire, because it was difficult from the organizational point of view, would change the previously homogeneous army and carry a certain risk to the power of the Russian administration on the colonial borders of the empire.

In April 1916, the Government considered the project of the Ministry of Agriculture to attract Persian, Korean and Chinese workers. But even this measure did not allow meeting the deficit in the workforce.

In the summer of 1916, the Government held a meeting on the work on the organization of defensive structures in the frontline areas. It turned out that these jobs need 1 million people. 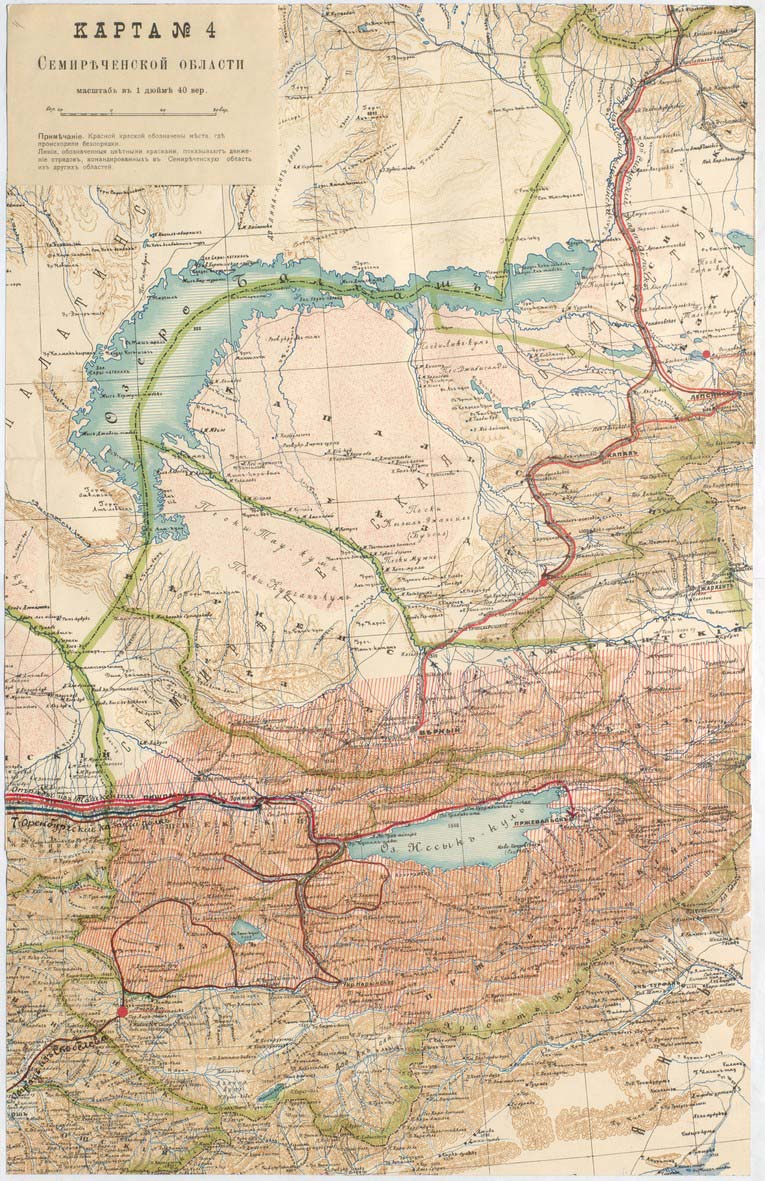 Therefore, the government decided to use the last internal reserves - to begin mobilization in Siberia and Turkestan. It was decided to close the problem of labor cadres with the mobilization of Kazakhs, Kirghiz, Uzbeks, Yakuts, Buryats, Kalmyks and representatives of other peoples.

Of the peoples not carrying military service, they were going to create military squads with a total strength of 550,000 people. But as always, the peculiarities of the region were not taken into account. In the agricultural region, the mobilization of the adult labor force in the midst of sowing could lead to the threat of famine.

Nevertheless, on June 25, 1916, Nicholas II signed the Decree on "Involving the male alien population of the Empire for work on the construction of defensive structures and military communications in the area of ​​the army in force, as well as for any other work necessary for state defense." The Decree provided for the call of men aged 19 to 43 years.

Usually the imperial bureaucratic machine takes each paper long enough to its logical conclusion, but not in this case. Surprisingly, the Decree was quickly agreed upon and signed.

Later it was found out that the decision was made by a narrow circle of persons, proceeding from the general state necessity somewhere to take an additional million workers. At the same time, the opinion of officials in the localities was very formal. This measure was, obviously, forced. The country's human resources have dried up. The authorities believed that another breakthrough was needed to win.

The ground for a national riot was prepared. The uprising began with the Kalmyks of Astrakhan and the peoples of the Caucasus, then spread to Kazakhstan and Central Asia, through Tajikistan, Turkmenistan, the uprising reached Siberia. In this uprising, dozens of peoples participated, more than 1 million people. 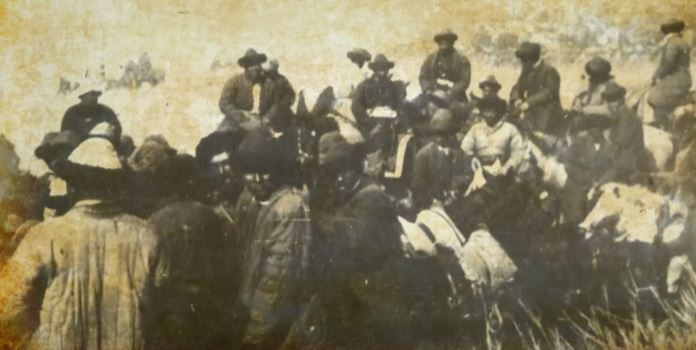 The centers of the uprising broke out in early July, 1916. Massive speeches were held in Semirechye, Turgay, Irgiz, Merke. Particularly bloody clashes took place in Kyrgyzstan. Against the insurgents troops were thrown.

July 22, 1916 to the post of the new Governor-General of Turkestan Adjutant-General A.N. Kuropatkin was appointed.

The tsarist government soon realized that the business was brewing serious and transported an entire army to Central Asia from the fronts of the First World - about 30,000 regular troops with machine guns and artillery. When the insurrection was suppressed, the punishers displayed unprecedented cruelty: military courts were established, which stamped out death sentences, artillery destroyed whole auls. There were cases when the Cossacks destroyed all the male population.

In the Semipalatinsk and Akmola oblasts, 12 cavalry hundred, 11 reinforced infantry companies, acted against the insurgents.

Against the Turgay rebels, the tsarist authorities threw an expeditionary corps consisting of 17 infantry companies, 18 Cossack squadrons, 4 cavalry squadrons, 18 guns, 10 machine guns and so on.

To suppress the insurrection in the Semirechye, 95 companies were sent to 8750 bayonets, 24 to 3900 sabers, 16 guns and 47 machine guns. Dozens of Kazakh and Kyrgyz auls were destroyed in the Semirechye, civilians were subjected to cruel persecution. Persecuted by the tsarist authorities of 300 thousand Kazakhs and Kirghiz, or one-fourth of the indigenous inhabitants of Semirechye was forced to flee to China.

Only on judicial sentences approved by Governor-General Kuropatkin, on February 1, 1917 - 347 were sentenced to death in the Turkestan region, 168 to prison labor, and 129 to imprisonment, not counting those who were shot without trial and investigation, who were killed at the hands of punishers and the detachments formed from the residents of the resettlement villages.

However, the punitive failed to suppress the insurrection until the very February revolution. Only after the overthrow of tsarism did the uprising in the Turgay region cease.

By February 1917, about 123,000 people or half of the planned amount were sent for logistical work. On March 14, 1917, the direction of the foreign population for logistical work was suspended by the decision of the Provisional Government, and on May 5, the Resolution was issued on the return of all those mobilized for rear work home.

Thus, the uprising of 1916 in Central Asia and Kazakhstan undoubtedly became one of the leading factors that influenced the weakening of the army's position at the front, the growth of nationalistic sentiments, the abdication of Emperor Nicholas II from the throne and the defeat of Russia in World War I.