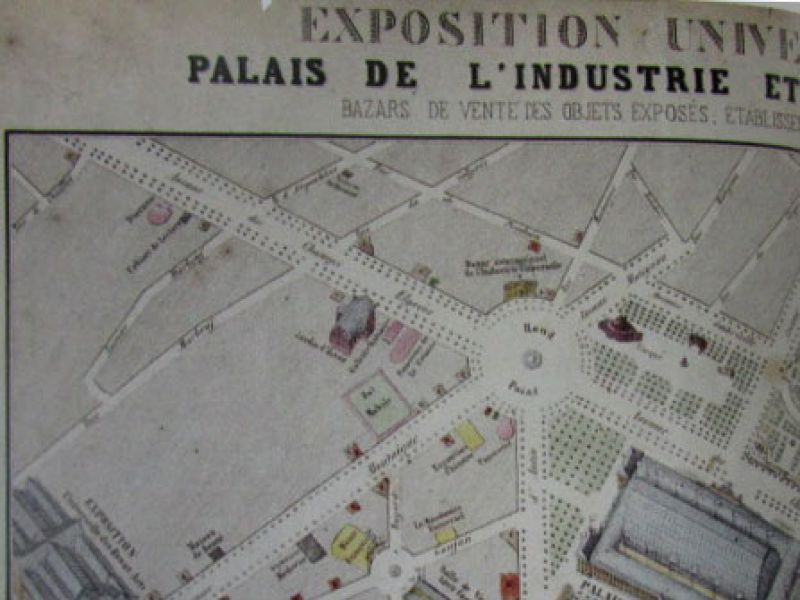 The NDH portal opens the pages of the history of EXPO. May 15, 1855 Emperor Napoleon III inaugurated in Paris the second World Exhibition

It should be noted that holding similar events was not an innovation for France. The very first exhibition of this kind, organized in 1798, allowed 110 participants to present their products to the general public. For all the scale of the expositions, they demonstrated the achievements of exclusively French manufacturers, and the main visitors to the exhibition pavilions were Parisians and representatives of the bourgeoisie.

As a consequence, the idea of ​​holding such events at the international level was both an innovative solution and a necessary step for the further development of exhibitions. After the brilliant start of the first World Exhibition in London in 1851, where France occupied the largest pavilion in the area, the inspired Napoleon III decided to hold the next World Exhibition in Paris. This idea found strong support from the French government. On the one hand, the country could demonstrate the outstanding achievements of local masters, on the other - glorify the French empire and directly the Emperor himself. The result of this step was the official meeting in Paris of Queen Victoria and Napoleon III.

The exhibition, under the patronage of Prince Napoleon, a cousin of Napoleon III, was to surpass its London predecessor in scope. 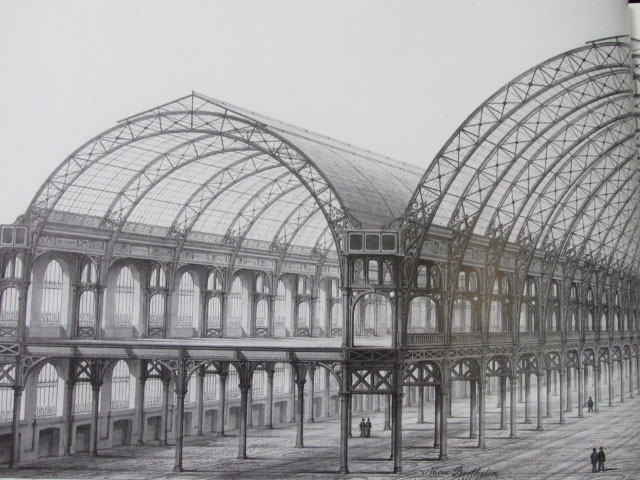 The answer to the British Crystal Palace was the Palace of Industry, erected on the Champs Elysees by the design of engineer Alexis Barrault and the architects Jean-Marie-Victor Viel. This incredibly bold construction with a total area of ​​45,000 m2 was a metal rectangular building with a glass roof (width 110 m, length 254 m and height 30 m). Considering this building is not large enough for the scale of the planned exhibition, Napoleon III ordered to build a new building - the Gallery of Machines. Located along the banks of the River Seine, the gallery was a model of advanced technology of that era. In a single architectural ensemble, the Palace of Industry and the Gallery of Machines connects the rotunda, designed in 1839. The erection of the majestic Palace of Industry took the lives of six people, and also caused serious damage to the health of 594 workers.

The Palace of Fine Arts was located on 20 000 m2 on the Avenue of Montaigne.

Thus, the total area of ​​all exhibition pavilions reached 12 hectares. 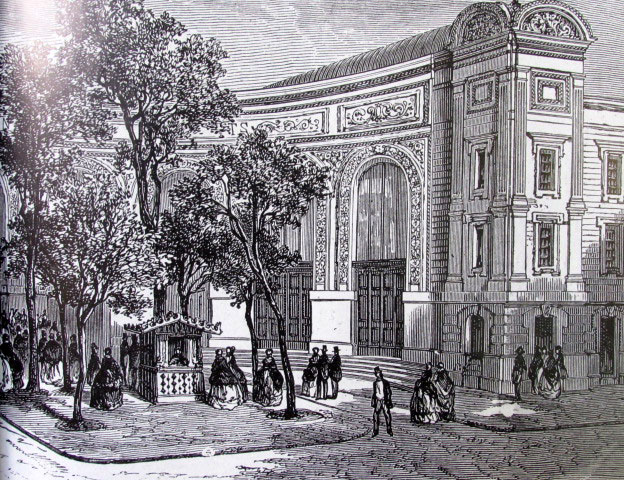 The official opening date for the second World Exhibition was scheduled for May 1, but due to delays in the organizational nature, it took place two weeks later - May 15, 1855.

By the summer, the original cost of the ticket (5 francs) was reduced to 1 franc (on all days except Sundays). The emperor ordered free entrance for 10,000 workers so that French masters could appreciate the world novelties, as well as learn from the experience of various techniques and methods of processing metal, wood and other materials. For many representatives of the working class of France, the World Exhibition in Paris was the opportunity for the first time to travel beyond its regions. For a more comfortable stay, guests were provided with guides to visit both the exhibition itself and the main attractions of Paris.

Attention to the visitors were offered inventions that amazed the imagination by the novelty of technology: lawn mowers, Loisel percolator for 2,000 cups of coffee per hour, a prototype of Moore washing machine, Singer sewing machine, talking doll, six-shot revolver and the first vehicles working on diesel fuel. The company Saint-Gobain showed the largest mirror in the world (height 5.37 m, width 3.36 m), manufactured by 200 employees of the enterprise. Leon Foucault demonstrated the scientific installation of the Earth's rotation with the help of a pendulum, which today is part of the exposition of the Museum of Arts and Crafts in Paris. 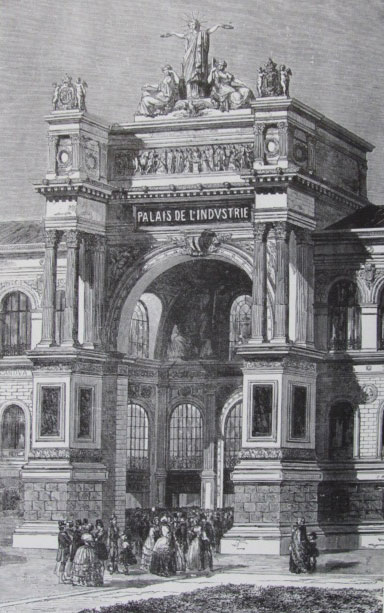 Among the novelties presented was the process of developing a photograph in a liquid collodion (nitrocellulose solution with an alcoholic mixture), which made it possible to increase the number of copies. One of the real gems of the exhibition was the Imperial Pavilion, dedicated to decorative art. Visitors could admire the imperial crown decorated with diamonds, imperial furniture items and other products. Also at the exhibition was introduced for the first time a wine classification system from the Bordeaux region.

In the world exhibition was attended by Goodyear, who built the pavilion entirely of rubber. He was awarded the Order of the Cross of the Legion of Honor, donated by Napoleon III.

The artistic environment was dominated by the Academy of Fine Arts, which bought paintings for museums and the imperial collection. Preference was given to the most submissive artists, while the disloyal remained on the sidelines. An example is the young Gustav Courbet, whose work was suspended from the presentation in the main exhibition pavilion. 40 paintings of his brush were shown in a more than modest room, and the price of the entrance ticket did not exceed 1 franc. The most resonant were the works of Courbet, "Funeral in Ornan" and "Artist's Workshop" - the majority of critics agreed that ordinary rural funerals are unworthy of such a large-scale canvas. The painter Jean Ingres, who was at the height of his fame, not only exhibited 40 of his works in the style of Boz Art, but also became a member of the jury of the contest among artists-academicians together with Delacroix.

On November 15, 1855, on the day of the official closing of the exhibition, solemn awards of its participants took place, in which 40 000 people took part. In addition to the prizes awarded to the jury, Napoleon III personally awarded another 40 people.

Unfortunately, the exhibition of 1855 left a very modest architectural heritage. The Palace of Industry was dismantled in 1899 and in its place was built new exhibition building of the Small and Grand Palaces that exist to this day. The preserved part of the pediment of the facade of the Palace of Industry, a sculpture in the neo-classical style - the personification of France, crowning Art and Industry, was transported to the Saint-Cloud Park. Another attraction of the 1855 exhibition was the Alma Bridge, dedicated to the victory of Napoleon in the Crimea in 1854.

Despite the fact that the event was visited by 5 million people (1,800,000 less than in London), it did not bring financial income to the French state, the Emperor was pleased with the Exhibition. It not only served to glorify the French empire, but also contributed to the exaltation of Napoleon III, as powerful and legitimate monarch. 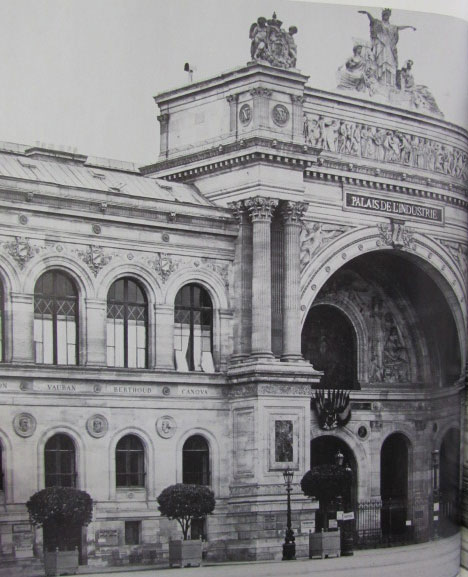 The original project of the Palace of Industry was truly grandiose, because it was intended to construct a building only of glass and metal. But the conservative thinking of the collegium of architects of Paris rejected this idea and, as a result, the elegant original model grew on all sides with high stone walls, and only the roof remained glass.

The exterior facade of the building is 208 meters in length. Its central part is executed in the form of a majestic arch, which opens the entrance from the Champs Elysees to the central part of the pavilion. The upper part of the arch is decorated with the sculptural ensemble of Robert Elias, representing France, which crowns wreaths from laurels Art and Industry. On the walls of the facade along the entire perimeter are engraved the names of the great scientists of the time: Arago, Ampere, Volt, Watt, etc.

Despite all the external obesity, inside the building seems very light and spacious. It consists of four pavilions, and the ground and first floor are connected by 12 staircases. The total area of ​​the palace is 45,000 m2, of which 27,000 m2 occupies the ground floor, and 18,000 m2 are reserved for the galleries on the first (upper) floor.