Home Publications The Battle Route of the 72nd Guards

The Battle Route of the 72nd Guards 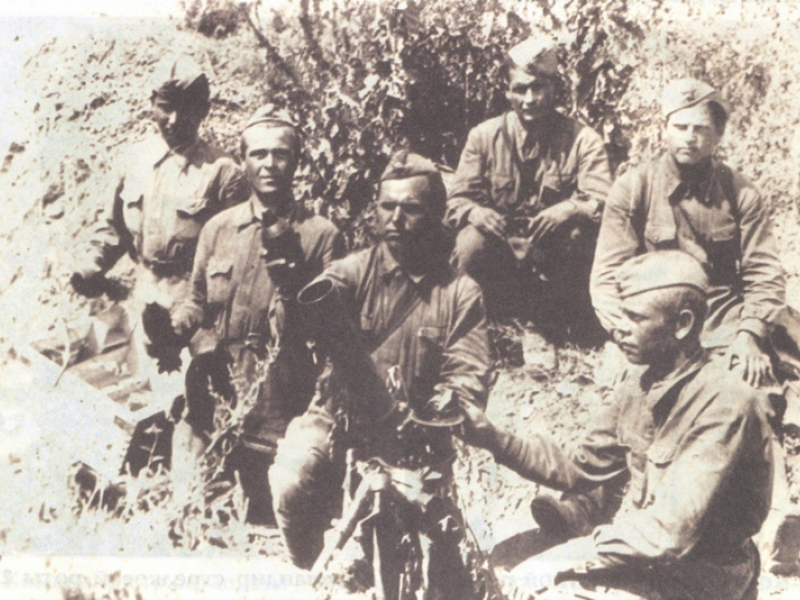 Echoes of war are farther away from us, the last veterans are passing away. But there are young researchers who are not indifferent to the history of participation of Akmolinsk people in the GP War

On the eve of Victory Day, the editorial staff of the “National Digital History” portal publishes an excerpt from the scientific work of the pupil of the 10th grade of the school-lyceum No. 35 of Astana Igor Ivanov "Formation and Battle Route of the 72nd Guards Rifle Krasnograd Red Banner Division of Akmolinsk". He works on this scientific project in the State Archives of Astana.

Formation of the 29th Rifle Division in Akmolinsk

In Akmolinsk during the war years, the legendary 29th, 310th, 387th Rifle Divisions and 106th cavalry division were formed and sent to the front. The city played an important role in the formation of Kazakhstani military units.

In the form of the 29th Rifle Division it is written: "December 1941. The small town of Akmolinsk was seemingly calm and deaf. There was no artillery cannonade, heavy explosions of aerial bombs and machine-gun fire. Only the menacing breath of war was heard here."

The Red Army, after heavy defensive battles, was in dire need of new reserves. By the order of Comrade Stalin, in December 1941, the 29th Rifle Division, which was included in the 1st Reserve Army in April 1942, was created. The division included: 106th, 128th, 299th rifle regiments, 77th artillery regiments, separate anti-tank fighter battalions, separate battalions of sappers, communications and other special units.

The personnel of the division was mainly staffed by conscripts from Akmola, Karaganda, North-Kazakhstan oblasts and some of the youth of the temporarily occupied regions of Ukraine and Belarus. 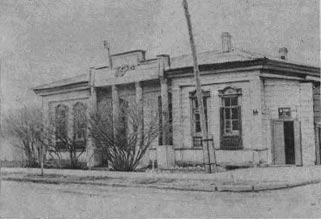 S.S. Khlebnikov’s former mansion. The museum of local history, then the Teacher's House and during the war the headquarters of the 29th (72nd Guards) rifle division were located there. In the 80-ies the premises were occupied by the children's day nursery. The house was demolished in 1987. Photo by N. Imamov

The headquarters of the division was in the former mansion of S. Khlebnikov along Socialist Street. The training of soldiers was conducted in an accelerated mode, engaged day and night.

One of the military commanders who served in the Red Army from 1937 to 1939, a participant in the battles at Khalkhin-Gol, awarded the Order of the Red Star, was a junior political instructor Sharipov Serik, a member of the All-Union Communist Party (b) since 1941. He with his mother and wife lived in the city of Akmolinsk. As a staff member of the Military Committee of the city he was given a bicycle. July 17, 1941 he was appointed secretary of the Komsomol bureau of the 1084th Rifle Regiment.

In mid-April 1942, at railway stations in Akmolinsk and Karaganda, parts of the division plunged into train cars and left for the reserve of the Supreme High Command and continued their military training in the Tula region. 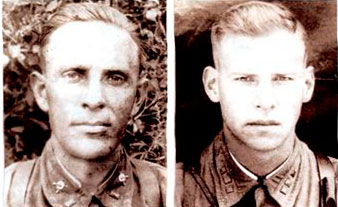 Senior political instructor of the advanced detachment Vassily Nagonny, a native of Akmolinsk, 1942

On April 24, 1942, Lieutenant Colonel Anatoly Ivanovich Kolobutin took command of the division. He was a relatively young and energetic man, already participated in the battles and awarded the Order of the Red Banner for the defense of Moscow. Commissar was the senior battalion commissar Joseph Vassilyevich Shursha, the chief of the political department - the battalion commissar Andrei Severyanovich Kisselev, the chief of staff - lieutenant colonel Dionisy Semenovich Tsalay, the chief of artillery - lieutenant colonel Nikolai Pavlov.

By the first half of July, an order had arrived to hastily transfer the reserve army to Stalingrad. This was due to an emergency situation. After the winter defeat near Moscow, the enemy managed to regroup forces. In the spring of 1942, by a powerful tank ram, he crushed the defense of the Bryansk and South-Western fronts, again seized the initiative, poured into the Caucasus and Stalingrad. At the Stalingrad direction, the Nazis concentrated about 30% of their troops. The goal of the breakthrough, according to Hitler's plan, was to, by capturing the Caucasian oil-bearing region and blocking the Volga, drastically worsen the already very difficult position of the Soviet Army and thereby ensure the Germans a successful conclusion of the war. 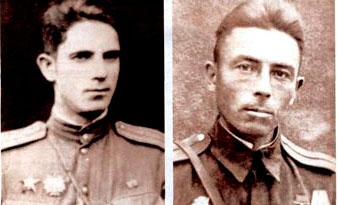 Major Yu. Ragulin - Commander of the rifle battalion of the 224th Rifle Regiment of the 72nd Guards Division, a native of Akmolinsk, 1942

Lieutenant E. Vnukovsky - Party organizer of the 3rd riffle battalion of the 72nd Guards Division, 1943. He was killed near Kharkov

On July 17, 1942, the division arrived at its destination and unloaded at the Zhutovo station of the Stalingrad Railway.

On August 6, a battle began with the enemy; especially the stubborn fighting had to endure the 128th Rifle Regiment and the 3rd Battalion of the 106th Rifle Regiment. August 7-10, battles were fought to destroy the German units wedged into our defense.

On August 17, 1942, the division received a new combat order: to dislodge the enemy and connect with the units of the 126th Division, which occupied the station of Abgonerovo. Strong and fierce battles began. Unable to break through the division's defense, on August 29 the enemy undertook a roundabout maneuver. Focusing a huge number of tanks and aircraft, they increased pressure on the flanks. The fighting to the north-east of Kotelnikovo reached the highest tension. Having broken through the defenses in the sector of the neighboring division, the Germans took the 29th Rifle Division in the ring, which fought hard all day in the encirclement. 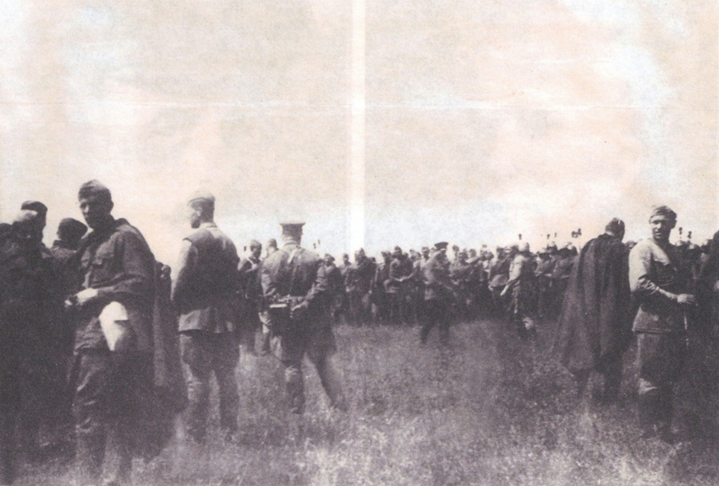 The enemy approached Stalingrad. September 2, 1942, the division took up defense in the area of ​​Elkhi, covering the southern outskirts of the city. Here the enemy was stopped.

A few days later, the Germans wrote in their leaflets: "We defeated the 29th Siberian Division," and then bitterly added: "and the Division reappeared."

During the Stalingrad defense, the movement of snipers was widely spread in parts. The sniper of the 299th Rifle Regiment, the younger political instructor Sayenko, went out hunting for days and ambushed the enemy infantry without a miss. He had a particularly good day, when he "took off" 12 Fritz. Sniper Jr. Lieutenant Ivanov exterminated 71 Germans, sniper Mishin 20. Also and other snipers mercilessly exterminated the enemy.

The defeat of the Germans at Stalingrad

By the time the general offensive began on January 10, 1943, the division was in the second echelon of the 64th Army.

On January 14, the division with the attached and supporting units received the task and entered the battle. Breaking the enemy's stubborn resistance, the division led a non-stop offensive. In these battles, dozens of names, glorified by courage and bravery, emerged among fighters, commanders and political workers. Many fighters and commanders were killed by the death of heroes, many were wounded and evacuated, but their heroism inspired fighters for new exploits. 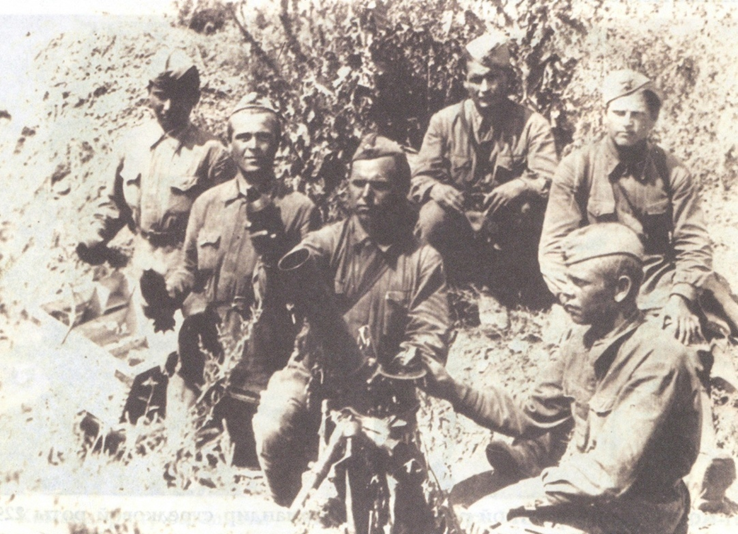 Commander of the company for political units, Lieutenant Mikheyev from the 128th Rifle Regiment on the night of 15 to 16 January with a group of 12 submachine gunners, moving forward, met a large congestion of the enemy. Evaluating the situation, he decided to turn aside and go from the rear. They were blocked by a dugout with enemy soldiers and officers. Mikheyev arranged his fighters so that the Germans could not attack suddenly, and himself with the commander of the platoon gunner Lieutenant Chubirov burst into the dug-out. Here they destroyed 20 Hitlerites and 30 captured. Sending the prisoners to the rear, Mikheyev continued to carry out the task. In the ensuing fierce battle, they killed 40 Germans and 100 captured. In addition, he captured large trophies. Having completed the combat mission Mikheev with his group of submachine gunners was fixed on the reached frontier and held it until the arrival of his unit.

For the excellent performance of the tasks of the Command by the Decree of the Presidium of the Supreme Soviet of the USSR, 1,544 fighters and division commanders were awarded orders and medals.

By the order of the People's Commissar of Defense of the USSR No. 104 dated 01.03.1943, the 29th Rifle Division was transformed into the 72nd Guards Rifle Division. 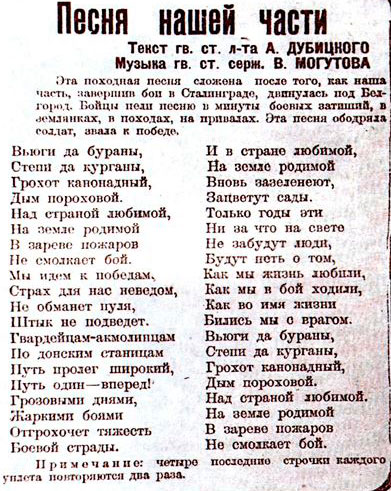 In the division a song was composed.

The soldiers were singing it.

Author A. Dubitsky. Here are its lyrics:

Our faces were burning with fire,

We were glorified by Stalingrad,

Our banner was pierced with bullets,

We do not know ways back.

The flames are shining for us,

We are walking the road of victory,

And our banner is roaring above us,

And there is no road back for us.