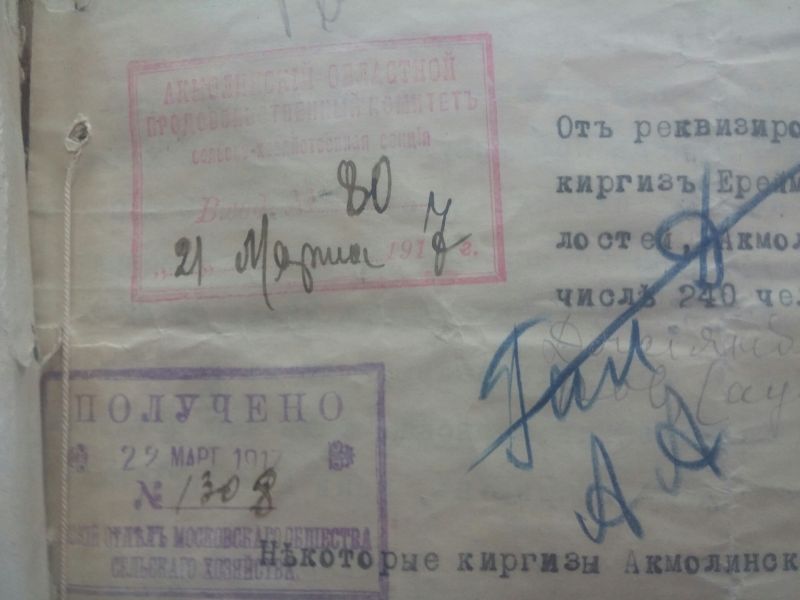 Archival documents reveal the fate of the Kazakhs, subjected to requisition in 1916 and kept in inhuman conditions in the Omsk prefabricated barracks

Search in the archive can always lead to unexpected results. And this time, after visiting the Historical Archives of the Omsk Region, I came across one interesting document on the history of the liberation movement of 1916 and the revolutionary events of 1917 in the Akmola region - a petition for the liberation of the Kirghiz of Yeremenskaya and Korzhunkolskaya volost in Akmolinsk district and region in the number of 240 people.

On March 21, 1917, the Akmola Regional Food Committee received a petition from 240 Kazakhs of Akmola County, kept in Omsk prison barracks. The Kazakhs filed a petition for a temporary release for three months to restore the undermined health and carry out sowing operations in their homeland. They were arrested for evading the decree of June 25, 1916 and for 5 months they were kept in a barrack and used as workers. Among them began an epidemic of typhus, many sick and died. 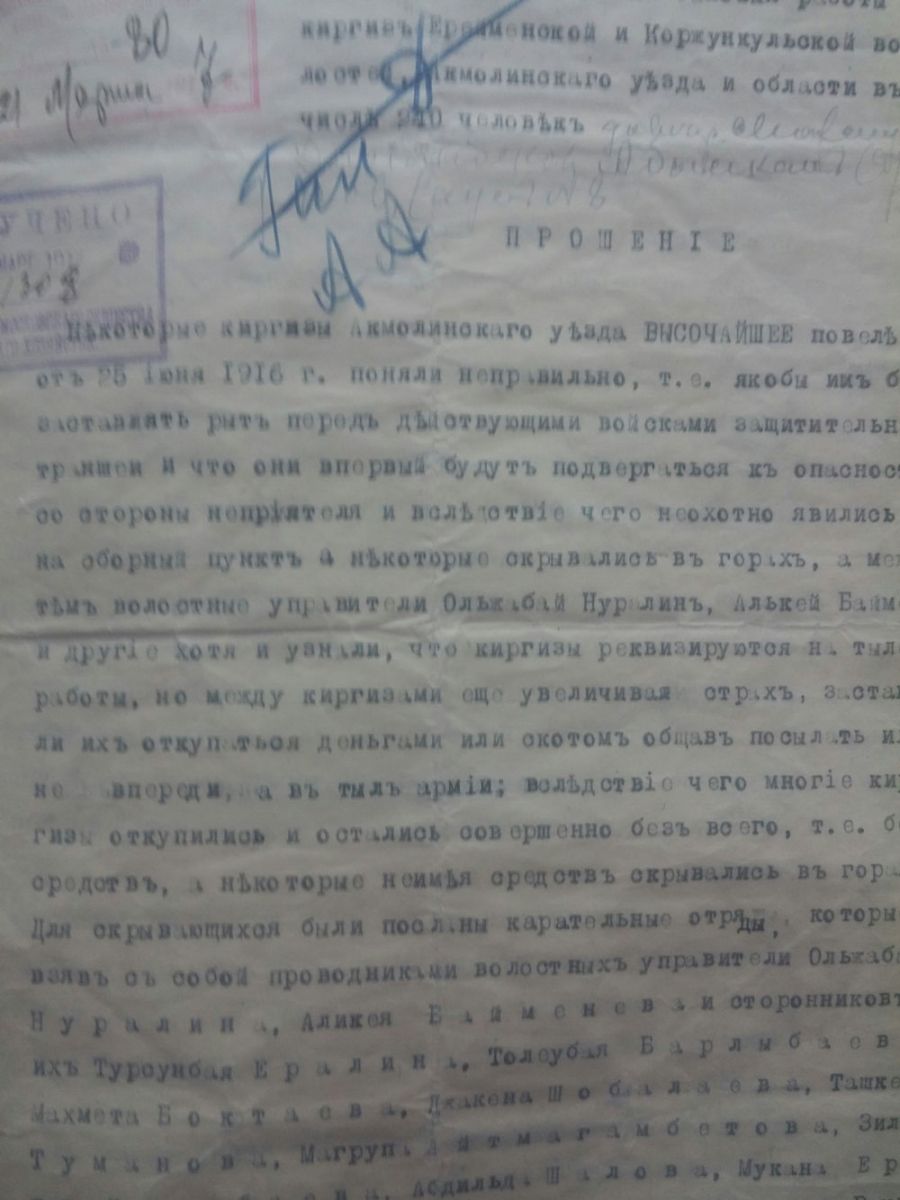 Some Kirghiz of the Akmola district misunderstood the Highest Decree as of June 25, 1916 suggesting that they would be forced to dig trenches for operating troops and, accordingly, they will be the first to be endangered by the enemy. As a consequence, they were reluctant to come to the gathering point, and many were hiding in the mountains. Meanwhile, the local parish governors Olzhabay Nuralin, Alkei Baimenev, knowing that the Kirghiz are requisitioned for logistical work, threatened them to make them pay off money or livestock, promising not to send them ahead of the army, but to the rear of the army, many Kirghiz who bought off left absolutely nothing, that is, without funds, and some, without the means, were hiding in the mountains. 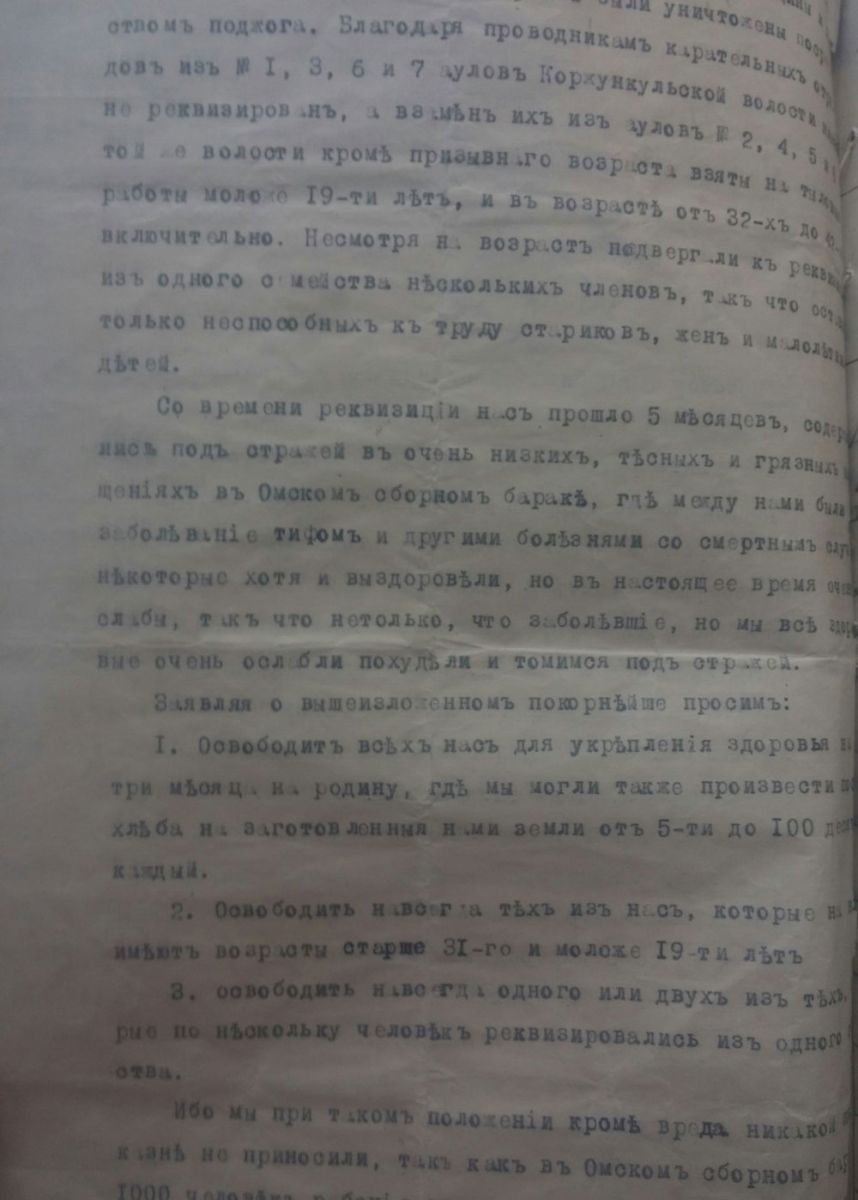 In the villages there were requisitions, while not taking those who walked on the list, and those who did not pay off, as documents and lists were destroyed through arson. Thanks to the conductors of the punitive detachments from the villages No. 1, 3, 6, 7 of Korzhunkul parish, no one was requisitioned, and instead of their villages 2, 4, 5 and 8 of the same volost, in addition to the draft age, Kirghiz younger than 19 years were employed for rear work at the age of 32 to 42 years inclusive. Despite the age of the requisition, several representatives from the same family were subjected, leaving only the old people, wives and young children who were unable to work.

Since our requisition, more than 5 months have passed, we were held in custody in very low, cramped and dirty premises in the Omsk collective barracks, where there were typhus and other diseases between us, there were deaths. Some, although recovered, are now very weak, so that not only those who have fallen ill, but all that are healthy, are very weak, have lost weight, and are languishing in custody.

Declaring the above, we humbly ask:

1. To release all of us, to improve our health for 3 months to our homeland, where we could also make a sowing of bread on the land we prepared, from 5 to 100 acres.

2. To release for ever those of us older than the 31 and younger than 19 years old.

3. To release for ever one or two of those who for several people requisitioned from the same family.

Or we, in this situation, except for harm, did not bring any benefit to the treasury, since in the Omsk prefabricated barracks 1,000 workers have been kept for several months. For our maintenance, the treasury spends at least 1 ruble per person, that is, 1000 rubles a day is only for food, but what about heating and lighting?

In the petition there is an insult to the volost governors, who not only did not protect their relatives, but, on the contrary, using darkness and illiteracy, profited from their fear. And the preservation of the male part of the population of some auls due to requisition from other auls confirms the intergenerational struggle that existed in the steppe. The further fate of the Kazakhs is unknown, but it can be assumed that, in the light of the revolutionary democratic reforms in Russia, this request, at least in part, was supported.