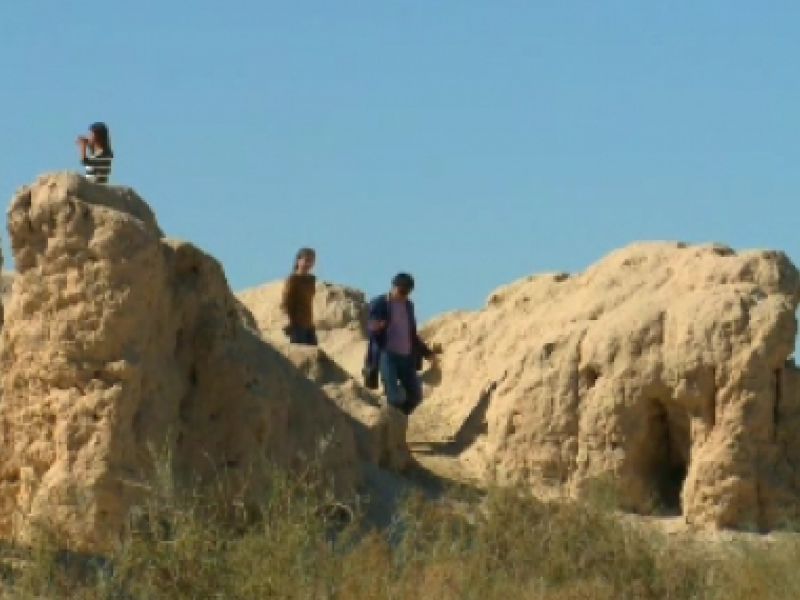 In Zhanakorgan area in the foothills of Karatau there is a unique cave Katyn-Kamal. In different times it served as protection from the locals Zhungar invasion and destruction of enemies. Unexplored history of ancient settlements Kumyan and Kyrozgent is also interesting.

Advanced technology in the construction of ancient cities Kumyan and Kyrozgent used more in 10th-12th centuries. The evidence of it his 6-foot fortress wall. In width it can accommodate four riders. The high culture and economic prosperity of cities say numerous archaeological finds: fragments of pottery, agriculture and trade items.

Alimzhan Erzhanov, historian:
— During the reign of Janibek Khan coins were minted for Syganak. They were found here in Kumiyane. Here also were found the coins minted during the time of Tamerlane. The latest discovery are 113 silver coins made in Khorezm. Now we are examining the findings. Very little information.
During the Zhungar invasion Kumiyan and Kyrozgent were destroyed by fire. Such a fate befell many ancient settlements and their inhabitants. In order to escape from certain death, people sought shelter in caves of Karatau. One of them is the Katyn-kamal. In order to get to there, several mountain streams should be passed through, and all the time to go up.

Adyrbek Sopybekov, historian:
— At the top of the mountain there is a deep cave. It cannot be seen from the bottom. Entrance to it hidden by large boulders and lush vegetation. According to legend, in the 18th century men from the nearby settlements hid from enemies 40 women and children. However, one of the babies cry draw their attention. So, then Dzhungars found them. They filled up the entrance with stones and buried alive people. Since then, this place called Katyn-Kamal, which means — a place where women are locked.
The nature took care of these poor people. In the cave, contrary to all expectations is light and spacious: the walls from stone, flooring from sand. There is spring water and herbs grow it this place. By the way, there are many of these unique caves at the foot of Karatau. They will be explored by archaeologists.