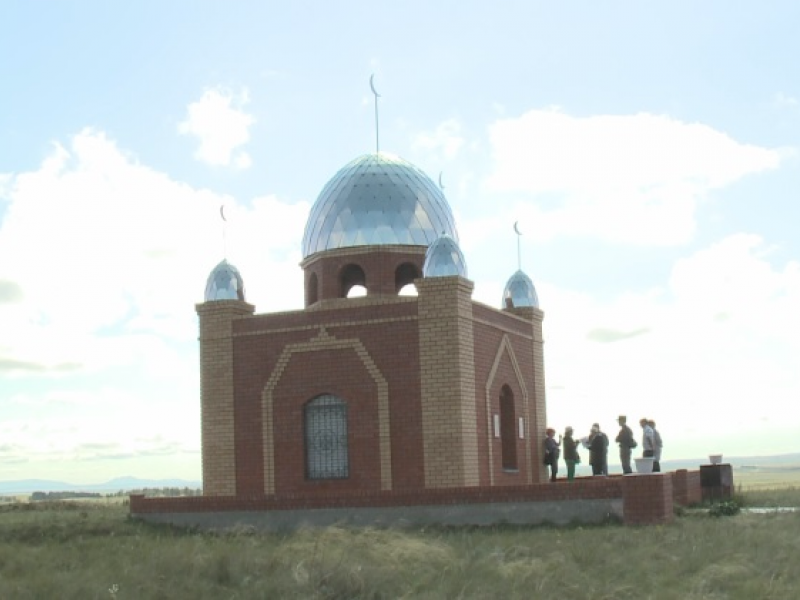 Inhabitants of the Kazakhstan village of Zerendy district made a surprising discovery. On the hill, they found an old stone. The inscription, which is preserved under a layer of earth and grass, read that here rests Abylay’s son Uali Khan.

For many years, residents of the village Kazakhstan knew this holy place. And here are the remains of the Great Khan. They came here to pray here and worshiped for wish-fulfillment. But no one imagined that who was buried here, the last khan of the Middle Horde.

— Our grandfathers rode us here on horseback, to worship, — says a local mullah Kairzhan Kozhahmetov. — This place called Khan-suegi. Nobody knew which Khan was buried here. We found a stone with graffiti. Then we took it to Kokshetau, where it laid for two more years, until experts started to discover it. Finally washed it, removed the moss and made sure that here rest Uali Khan, his mother and nephew Sultangazy.

— For many years it was thought that Uali Khan is buried in the tract Syrymbet — says the Deputy Director for Science Akmola regional historical museum Alma Kunabayeva. — But, based on the findings of a local resident — a tombstone, it can be assumed that he was buried on this hill. Not far from here there is a mountain of Karakalpak, there is speculation that Karakalpak — is parking, village of his mother, wife Abylay Sajman Khan Khanum. By the way, here are seven graves. Old-timers suggest that buried here itself Sayman-Khanum, daughter of Karakalpak bey Sagyndyk Shuakpay.

In historical records Uali Khan was called weak. But he was able to be a ruler of a vast territory from Petropavlovsk to Balkhash for almost forty years. He managed to keep its integrity, protect against outside intrusion, skillfully using a policy of a great father. It was built on friendship and subtle maneuvering between the Russian and Qing empires. This again confirms that Kadyrzhan Abuev, Ph. D., Professor, lecturer at Kokshetau State University named after Shokan Ualihanov. He deals with the history Abylay Khan for many years.

— For a long time in Soviet historiography names of Kazakh khans, judges and warriors were not called — says K. Abuev.

— In this regard famous scientist Anna Pankratova said: «Among historians there is a desire to belittle the history of Kazakhstan. I do not understand why in similar situations Georgian kings and Uzbek khans considered as progressives and Kazakhs should blacken and Abylay Kenesary?»

In fact, even in the Soviet history of the great Kazakh Khan Abylay — only one sentence:" He signed under the protectorate of the Russian Empire». That’s all. On Ouali to 1990s in Kazakhstan publications generally could not find any information. It is not surprising that the story Ouali, his 40-year rule of the Middle Zhuz generally unknown. Harsh assessment Ouali gave his grandson Ualikhanov Shokan, who believed that his grandfather was a weak successor Abylay Khan because blindly followed all instructions Petersburg. Wali died in 1821. And already in 1822 Khanate gone into oblivion.

In fact, even in the Soviet history about the great Kazakh Khan Abylay there is only one sentence: «He signed a protectorate of the Russian Empire». That’s all. About Uali in 1990s in Kazakhstan’s publications generally could not find any information. It is not surprising that the story Uuali, his 40-years position as the governor of the Middle Zhuz generally unknown. Harsh assessment gave to Uuali his grandson Shokan Ualikhanov, who believed that his grandfather was a weak governor of Abylay Khan, as he blindly followed all instructions of Petersburg. Uali died in 1821 and already in 1822 Khanate gone into oblivion.

According to the inscriptions, tombstone was established in 1903 by the great-grandson of Uuali Sultangazy. As Colonel of Guards Elite Regiment in St. Petersburg, he came home for holiday and put the plate on the grave of his great-grandfather.

According to Professor K. Abueva, scientists of our time still should determine the role Uuali in the development of independence of steppe.

By the way, although Shokan Ualikhanov condemned his grandfather as a weak ruler, he took as a surname the name of an ancestor, thus immortalized him. Perhaps, that’s why there was a version that Uali Khan was buried in the Syrymbet tract, where lived his younger wife Ayganym the grandmother of Shokan. Khan fell in love with her at the age sixty.

In early October, in the Akmola region will be widely celebrated the 300th anniversary of Abylay Khan. Many activities were planned. Only for Uali Khan there was again no place.