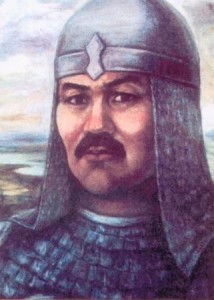 Prominent statesman, famous warrior and hereditary bii. He was one of the main organizers of liberation fight against Dzhungar and Kalmyks aggression in 18th century.

Bukenbay Karabatuly (1667-1742) was the prominent statesman, famous warrior and hereditary bii, one of the main organizers of liberation fight against Dzhungar and Kalmyks aggression in 18th century. He was born and grew up in Western Kazakhstan, descendant of Tabyn tribe.

In 1710, during the all Kazakh Congress Bukenbay was unanimously elected as chief commander united Kazakh troops. As the leader all Kazakh militia was in the forefront of military battles with the Kalmyks in the west and Dzhungars in the east of Kazakh steppe. In the battles with Dzhungars heroically were killed four of his elder brothers. Bukenbay played a big role in official acceptance of the Kazakhs of Russian patronage. The main core of his policy and his companion Abulkhair was the union of all Kazakh tribes and formation of strong centralized state under a formal protectorate of Russia.

BukenbayBatyr (warrior) spent his entire adult life in the military campaign and wars with against external enemies. He started his heroic path in 1690s in wars with Kalmyks, Dzhungars, Russian Cossacks and partly with Bashkirs. He heroically died in 1742 during the battle with Turkmens at the age of 75, leading Kazakh squad. Bukenbay Batyr (warrior) was famous person across the Kazakh steppe. Despite the presence of many archival sources about him his heroic acts and achievements were wrongly identified with other homonymous warriors.