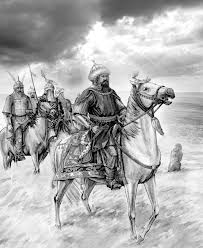 Zholbarys khan (1690-1740) was the khan of Great juz and son of Abdullah. The family was descended from an unknown branch of the Kazakh dynasty of Genghis’s descendants.

Zholbarys Abdullah (1690-1740) was the khan of Great juz and son of Abdullah. His permanent residence was located in Tashkent, previously belonged to his father. The tribes that subordinated to him roamed in the valleys of the River of Shyrshyk (right inflow of Syrdarya) and Arys (flows through the territory of South Kazakhstan region), as well as in the area between Tashkent and Turkestan. In foreign policy he sought to hold back the Dzhungars troops and followed the policy of convergence with Russia.

In 1723, during the Great disaster on behalf of his subordinate tribes and residents of Tashkent he was forced to accept their dependence from the governor of Dzhungar khanate Galdantseren (1697-1727). In autumn 1726, Zholbarys participated in all Kazakh Congress in elevated hill above the River Badam in Ordabasy area. In the late 20s of 18th century Zholbarys received actual independence of his possessions from Oirats. However, in 1734-1735 Dzhungar’s Khong Tayiji Galdantseren (1727-1735) forced him again to admit protectorate.

Zholbarys khan tried to establish relations Russian government. In 1738 he wrote a letter to Russian governors about intention to take Russian citizenship.

September 19, 1938 Empress Anna sent special letter addressed to Zholbarys khan with confirming acceptance of citizenship. However, resistance of Dzhungar governors and lack of close relations between Russia and Great juz did not contribute to the implementation of Zholbary’s intentions. In addition, the lands of Great juz were still too far from the zone of Russian influence.

In 1739, in alliance with the khan of Middle juz Abylay Zholbarys khan headed fight against Dzhungars. With joint efforts they managed to release towns like Tashkent and Sairam.

April 5, 1740, Zholbarys was killed by local khoja in Tashkent mosque. He was buried in Turkestan. His murder has increased the vulnerability of foreign policy in Kazakh steppe. After his death the governor of Tashkent was appointed Tole bi. All activities of Zholbarys khan became important step in formation and development of Kazakh state. He left the mark on history as a sovereign governor of the first half of the 18th century.